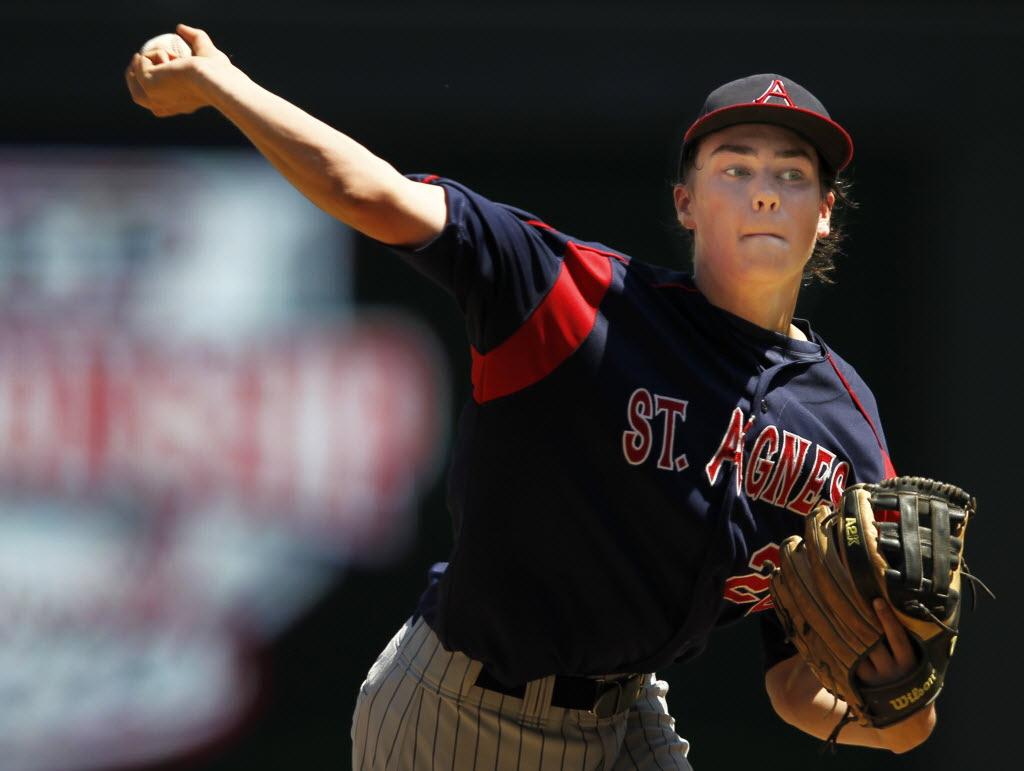 1 Looking to repeat
St. Agnes is looking to follow in Eden Valley-Watkins’ footsteps from 2010 and 2011 and repeat as state champion. The Aggies (13-6), who are seeded fourth in the eight-team field, shut out all three of their opponents during last year’s title run. Jack Fossand returns on the mound, and registered two of those shutouts. He blanked New York Mills 1-0 in the quarterfinals and Lac qui Parle Valley 6-0 in the final. Fossand, a junior, is 6-2 with a 0.64 ERA this year.

2 Odd year, back to state
Wabasha-Kellogg’s previous three state tournament appearances were in 2007, 2009 and 2011. It was the runner-up to MACCRAY in 2009. The top-seeded Falcons (17-1) are in search of their first state championship. Senior starting pitchers Will Greenheck and Cory Loechler both own 6-0 records. Greenheck has a 0.83 ERA and Loechler’s is 0.95. The Falcons have allowed one run or fewer in 13 of their 18 games.

3 First time for Floodwood
Floodwood is the self proclaimed Catfish Capital of the World. Now it also can be known for its high school baseball program. The Polar Bears (17-2) are the first team in any sport from the school to advance to a state tournament. They will have six four-year starters in the lineup. Coach Adam Johnson’s squad has not lost since the third game of the season. The Polar Bears are riding a school-record 16-game winning streak.

4 Two back a second time
Both Blackduck (18-2) and BOLD (15-6) are back in the state tournament after making their first appearance a year ago. They are two of the three unseeded teams in the field. They combined to go 1-4 in last year’s event, and the only victory came when Blackduck beat BOLD 4-2 in the quarterfinals. They are in opposite sides of the bracket this year. BOLD faces No. 1-seeded Wabasha-Kellogg while Blackduck takes on third-seeded Osakis (18-2).

5 Looking to go deep
Since the inception of BBCOR regulations to aluminum bats, it has become much more difficult to hit the long ball and score runs. Three players in the Class 1A field have shown the ability to hit a home run. Austin Baab of Wabasha-Kellogg has hit six on the season while Riley Bernsdorf of Floodwood and Dylan Weisert of Blackduck have each hit four. Both Baab and Bernsdorf enter the state tournament hitting over .500 while Weisert is at .424. All three are at the top of their team’s RBI list.