Hundreds of games have been cancelled while the Metrodome hosts games up to 20 hours a day. 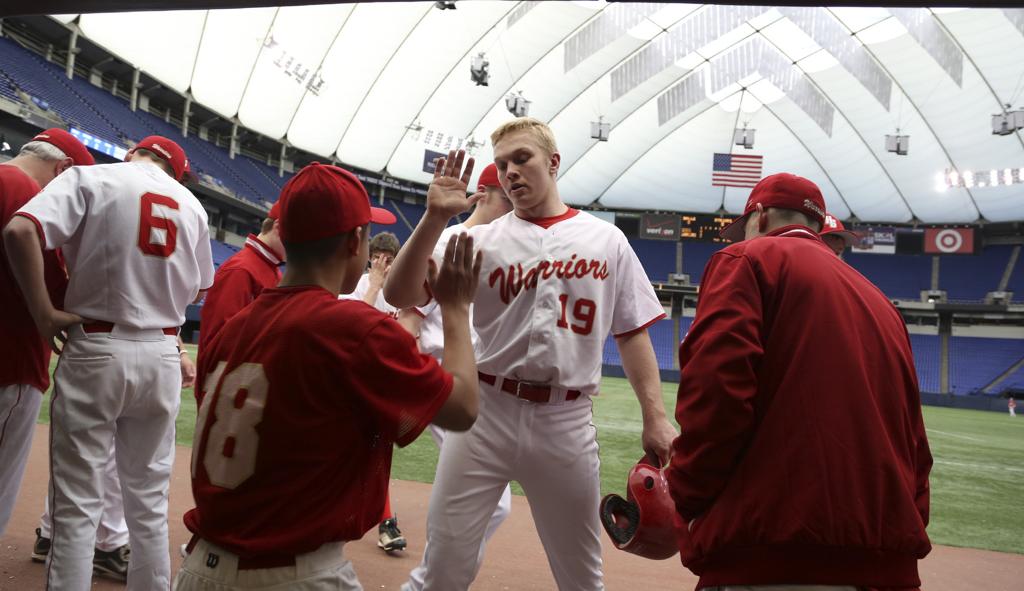 What many high school coaches are calling the pokiest spring weather in a decade has left Twin Cities baseball and softball programs desperate to play games.

Champlin Park coach Jeff Stoll received e-mails earlier this winter from coaches savvy enough to have reserved the Metrodome as a hedge against a late spring. If Stoll didn’t respond within a minute to the query seeking an opponent, the request was filled.

Finally, his luck changed one February afternoon, when a St. Francis coach’s request popped up as Stoll sat at his desk.

“After I said I’d take it, he got four other teams wanting to play,” Stoll said. “It’s been a while since the weather has been this bad. There is only so much you can do on a gym floor.”

Teams have grown so tired of taking ground balls in gymnasiums and hitting in batting cages that the Metrodome, normally the spring haven for a smattering of college teams, has been booked as much as 20 hours a day.

High school teams are taking what they can get. St. Thomas Academy played at 4 a.m. last week. Hopkins and Benilde-St. Margaret’s will play at 6:45 a.m. this Friday. Maple Grove recently took the field from 10 p.m. to midnight.

Champlin Park spent four hours scrimmaging Forest Lake on Monday afternoon at the Metrodome. “It was a gift,” Stoll said.

Minnesota’s extended winter has forced spring sports to remain indoors and pushed the outdoor season back to its latest start in about 10 years, many coaches said. A year after a balmy March that brought 80-degree temperatures, this year’s first official day of baseball practice, March 18, looked and felt more like the middle of winter. Late March saw temperatures 25 degrees below normal. There were 12 inches of snow in March, seven more than normal.

Despite recent sunny skies and the temperature topping 50 degrees Saturday, most grass ballfields around the metro area remain frozen. Hundreds of baseball and softball games were canceled this week and already some next week are being canceled. It’ll likely take more than the projected 10-day forecast of 40s and low 50s to thaw out frost deeply embedded in the soil.

“Frost has been driven pretty deep this year. It’ll take longer to get out, I’m told,” said Bob Beedle, coach of defending Class 3A softball champion Stillwater, where officials blew the snow off its infield last week hoping to speed the thawing process. “Groundskeepers monitor it and won’t let us on field until the frost is out. We’d love to sneak out there, but they’ll catch us.”

The Metrodome’s former tenants opened their season in 35-degree weather Monday, an experience Tigers starting pitcher Justin Verlander called miserable once the shade set over Target Field. At about the same time, Champlin Park senior pitcher Trevor Naslund enjoyed throwing his one inning with two strikeouts in the dome and sympathized with the pros.

“They probably wanted to switch with us today,” Naslund said.

Henry Sibley began last season’s workouts outdoors and never went inside. On Monday and Tuesday, the Warriors played the first two games of their season in the Metrodome. Once the seven innings of the season opener were over, the two teams continued to play the final 30 minutes of their purchased time.

The going rate for Metrodome field is $500 an hour — half that price before 6 a.m.

“We try to maximize our time as much as we can,” Warriors senior outfielder Nick Goldberg said after going 2-for-2 with a triple. “For us we’re definitely worried about not getting on our own field soon. It’s got a blanket of snow on it still, but hopefully it drains soon.”

Coaches aren’t counting on it. St. Thomas Academy baseball coach Paul Weinberg said if it rains, next Monday’s scheduled season opener is doubtful. Maple Grove softball coach Jim Koltes is doing everything he can to make sure there are no cancellations. For the first time in 12 years, he decided to have his field snow-blown to help it recover.

The Crimson has a huge advantage on its campus, though — a dome. The district-funded facility is big enough to simulate softball fields and has held numerous scrimmages this winter. Park Center and Osseo also have taken advantage of the indoor space.

On March 23, eight teams used the Maple Grove dome for a full day of scrimmaging, one game in each corner.

“We’ve had a lot of teams calling to line up scrimmages with us and try to see if we’d do another dome scrimmage,” Koltes said. “The problem is everybody is in the same boat [fighting for time in domes].”

Thanks to the artificial turf at Veterans Ball Field at Minnetonka High School, the baseball team has been practicing outdoors all week with an eye on opening its season Friday. The turf has made the Minnetonka field a desirable location for other teams looking to squeeze in games.

“I know [the Skippers] have been practicing outside and they’ve got games scheduled for this weekend,” said Minnetonka athletic director Ted Schultz. “It’s cold — I told [coach] Paul Twenge to wear two jackets — but they’re out there.”

“That was booked a couple of weeks ago,” he said. “I know there has been some interest [in using the field], but the truth is, there isn’t any time available. It’s all booked up.”