He throws a fastball, a curve and a change-up 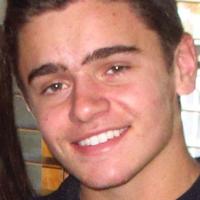 The first day of baseball practice was a little different than last year. Yeah, I think last year we were outside right away. This year, it looks like we’ll be inside for a few weeks.

Positions: I play pitcher and shortstop. I like both; it’s kind of a tie between them.

Pitching repertoire: I throw a fastball, a curve and a change-up. I like to stay with the fastball.

Talk about playing year-round with the Minnesota Blizzard: [Played] about five, six years. We have tryouts in July and end up going basically through February.

How do you play in the winter? We went to Iowa in September, Las Vegas in October and Arizona in January. They went to Vero Beach, Florida in February, but I didn’t go.

What is the best part of playing baseball? Being on the mound is my favorite. I like having the ball in my hand and being in control.

Is high school baseball important? We only get about 18 games a year, so you have to make the best of them.

Role model: My brother. He didn’t play sports. He went to Duke and worked on Wall Street for a couple of years. I really look up to him.

Is there a baseball player you admire? Robinson Cano of the Yankees.I saw him play in fifth or sixth grade, and he’s been my favorite player since.