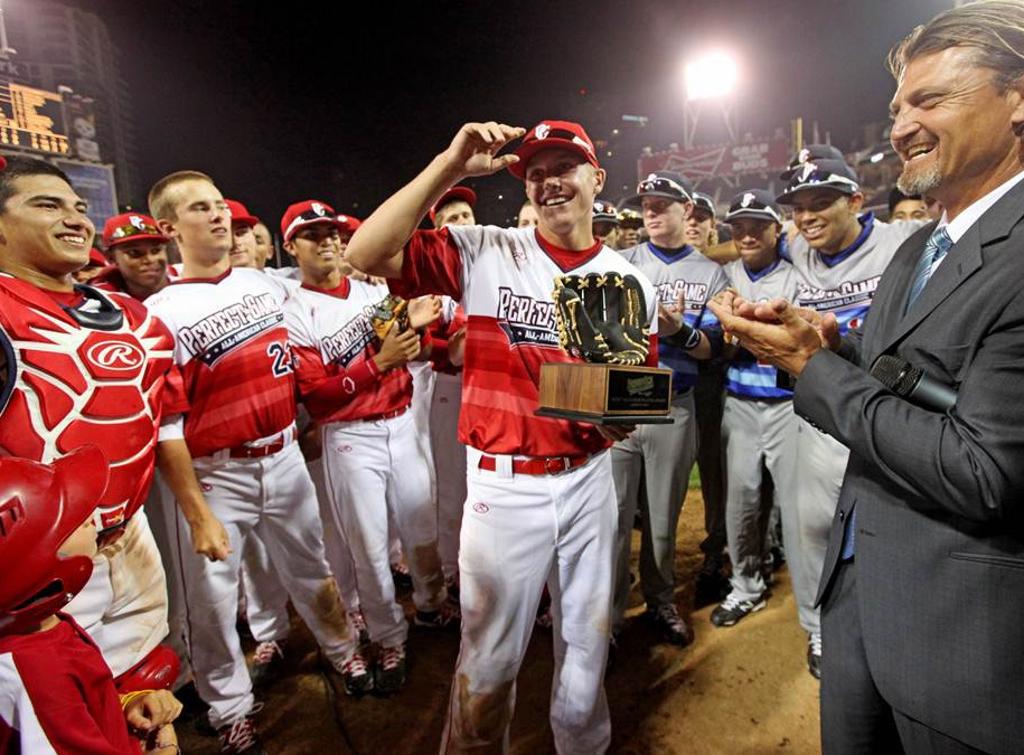 Sitting alongside one another in a stuffed hotel conference room, Ryan Boldt and Logan Shore realized they were special.

First Shore, a pitcher from Coon Rapids, then Boldt, an outfielder from Red Wing, heard their name read from a list determined by baseball's amateur governing body to be the country's best 28 high school baseball players.

The humbling moment earned the pair a chance to represent their country as a part of USA Baseball's 18-and-under team. If the Star Tribune All-Metro first-teamers can survive the final week of evaluations that end Tuesday in Los Angeles, they will be the first Minnesotans to do so since Joe Mauer in 2000.

The last local duo to earn the honor in the same year was Tom Nevers of Edina and Chris Weinke of Cretin-Derham Hall in 1989.

"I don't even know what to say," Boldt said about the possibility of being in the company of the Twins star. "Hopefully we can be in the same category of making the team."

Claiming one of the 20 spots to represent Team USA at the International Baseball Federation Junior World Championships in South Korea would complete a perfect summer for the pair, especially Boldt.

Jumping from one national showcase to the next in the past three months, both Boldt and Shore impressed everywhere they landed.

The teenagers most recently shared a field earlier this month in Long Beach, Calif., for the Area Code Games national showcase, where Boldt began a week of baseball that surprised even him. The Red Wing outfielder was named to the All-Area Code Team, and two days later topped that.

After Shore and most of the country's top talent returned home, he remained in Southern California for Perfect Game's annual high school All-American game.

In front of a nationally televised audience at Petco Park, home of the San Diego Padres, Boldt confirmed his elite status. He contributed a triple, single and an outfield assist on his way to an All-American MVP as the West team rallied to defeat East 7-6.

"I wasn't thinking [about MVP] at all," Boldt said after he received the award from Trevor Hoffman, baseball's former all-time saves leader. "It's a dream come true. Depending on how I do for USA tryouts, that is up there [as best baseball moment]."

The honor put Boldt into a special class. Past MVPs have consistently been selected in early rounds of baseball's professional draft, and as high as No. 1 overall. Six of the previous nine were drafted in the first round.

Shore wasn't surprised to hear the news. He spent most of the summer with Boldt and saw firsthand why he is so special.

"It's good to see good kids get what they deserve. He works hard and is a really humble, good guy," Shore said. "He's lit it up this summer. I think he should be [on Team USA] in my eyes."

Mauer, who played for Cretin Derham-Hall, was pleased to hear about the national recognition for the homegrown athletes. He remembers the occasional jab he would get about Minnesota baseball, not known as a baseball hotbed, when he was in the program.

"The biggest thing it did for me was knowing that I could play with kids all over the country. I'm proud to be from here and show everybody else that we can play with anybody, too," Mauer said. "I wish them the best."

The Twins catcher compared international and USA trials competition to the minor leagues' lower levels. Twins center fielder Denard Span, who also played for the 18U team, said the competition gave him confidence to accelerate his game heading into his senior year of high school in Tampa, Fla., and eventually professional baseball.

Shore has seen similar results. He has noticed improvement after every showcase and hopes to peak with a gold medal on the line.

"This is one of biggest honors I ever could get," Shore said.

"Being able to represent the USA and play internationally against other countries would be crazy. Especially following the Olympics ... I kind of feel like this is a mini-Olympics for baseball."