Childhood friends Dan Motl and Matt Stemper Burnsville will play U baseball together, too. Teammate Bo Hellquist will play at Minnesota Duluth. 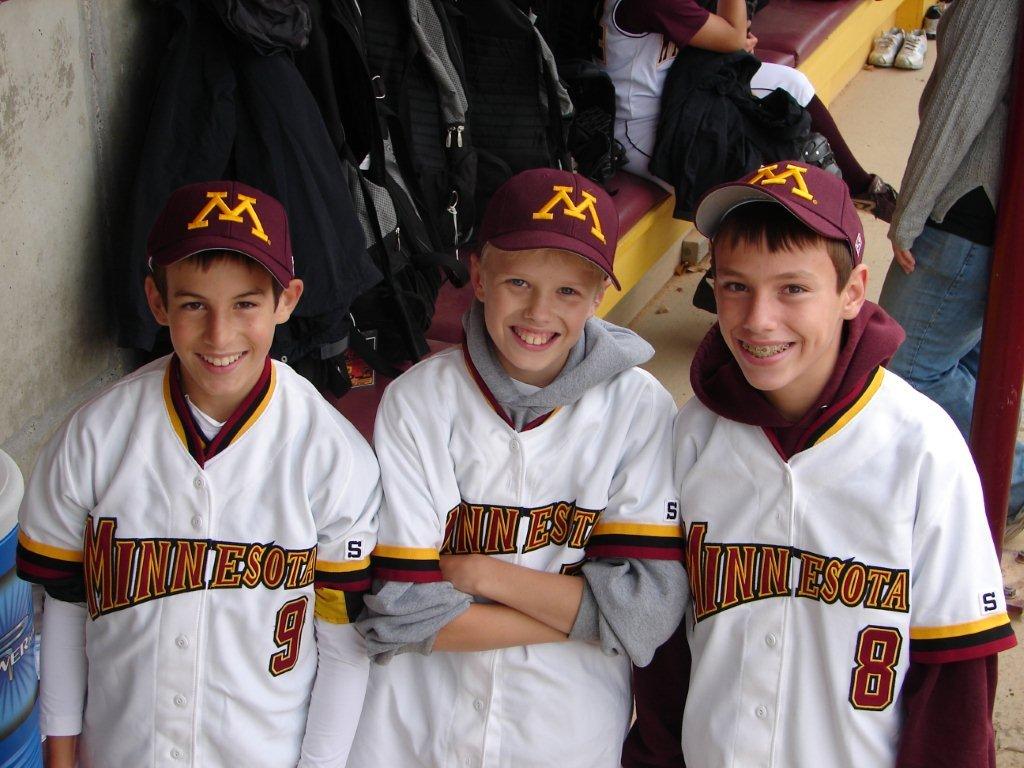 Even before they played baseball together for Burnsville, Dan Motl (left), Bo Hellquist (center), Matt Stemper were bat boys for the University of Minnesota team. Next season all three will play in the university system.

Matt Stemper and Dan Motl have known each other since they were 4 years old. So what's another four years?

The Blaze baseball duo -- core members of the 2011 Class 3A state championship team and 2010 runner-up squad -- will continue their playing careers and higher learning together at the University of Minnesota next season.

This isn't their first experience at the U. Both Stemper and Motl, along with Burnsville teammate Bo Hellquist, who will play baseball at Minnesota Duluth, served as the Gophers softball team's bat boys from sixth to eighth grade. Shannon Stemper, Matt's sister, starred for the Gophers during that time.

"They were just two of my best buddies and we would just go to games and one day the coach was like, 'Get in the dugout, you're being our bat boys,'" said Stemper, a strong-armed shortstop and elite hitter who idolizes Derek Jeter.

Now, Stemper will get to live out his own experience on campus, which his friend knew he was destined to do.

"I knew there was no way he'd turn away from Minnesota," Motl said of his longtime teammate. "When he was a kid, that's all he talked about."

Stemper's part of a Gophers family. He wears Gophers apparel. He frequents the statistics pages at GopherSports.com. It didn't matter if his buddies razzed him about it.

Motl, on the other hand, is a convert. He grew up with a Badgers background. His whole family went to the University of Wisconsin in Madison, including his sister, who just graduated. His grandfather played basketball and his dad played football for Wisconsin.

Badgers Fathead wall graphics even exist in his house, with one quite possibly in his bedroom.

"I was a huge Badger fan. Huge," said Motl, an athletically gifted outfielder. "It was kind of hard, but I slowly turned into a Gopher. It was definitely the right choice for me to go to Minnesota."

Motl and Stemper completed their student orientation at the University of Minnesota two weeks ago. Both were three-year starters for Burnsville coach Mick Scholl. They will be missed.

"I'm just totally blessed to have had the opportunity to coach those two," Scholl said of his two former captains. "And they're going on to bigger and better things."

Stemper is the purist, a baseball junkie who reads up on historical icons and rattles off random statistics to teammates in the dugout or in the halls. The shortstop has been clocked throwing more than 90 miles per hour across the diamond from shortstop to first base, ability that has opened up several other college opportunities for the Gophers diehard. Scholl called him one of the best hitters he ever has coached.

Motl is the pure athlete. Raw speed, catching, throwing and hitting ability molded him into the complete package. Scholl believes Motl has only scratched the surface of his playing ability.

Both will try to carry on their success to the Division I level together. Instead of biking to each others' houses and walking to class in Burnsville, they'll be hitting up Dinkytown as freshmen this fall.

"Best buds," Motl said. "Might as well just keep it going a little while."