Bemidji baseball gets it right

The Lumberjacks saw Eden Prairie tie the score after they had celebrated a victory -- only to pull it out for real in extra innings. 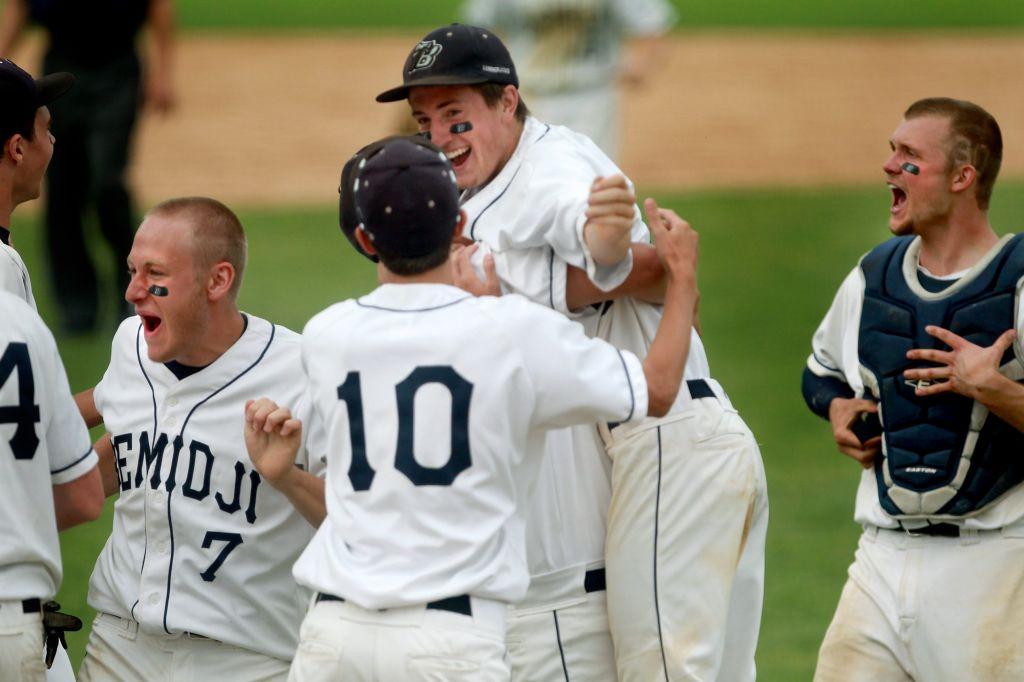 Winning pitcher Mitch Hendricks is lifted as he and his teammates, Jordan Sweep, left, Collin Rutledge, center, and Collin Leif thought they had one after a called strike in the seventh inning during the Class 3A state high school baseball semifinals. Th

The first time Collin Leif threw his mask into the sky. The second, he fell to his knees emotionally drained.

The Bemidji senior catcher experienced not one, but two moments worth a berth in the Class 3A state championship game. But one of them was premature.

The Lumberjacks stormed the field at Midway Stadium in the bottom of the seventh and again in the eighth inning after holding off Eden Prairie 8-6 in the first of two semifinal games. The bizarre finish and restart nearly crushed Bemidji, but the Lumberjacks regrouped for an extra-inning victory.

"The first time, it was amazing. Then after they called it back, that crushes you," Leif said. "Your heart just drops."

Leif was the center of a play that nearly cost Bemidji its first trip to the state championship game since 1986. A strikeout with two outs in the bottom of the seventh was the end of the game, Leif thought. So did the home plate umpire.

Eden Prairie coach Mike Halloran didn't agree and asked for a review. The Lumberjacks were stunned and stood lifeless while umpires revisited the play. It was determined the hitter struck out, but since the ball hit the ground, the tag or throw to first required for the out was not fulfilled. Video evidence viewed later on showed the catcher had tagged the hitter, but the umpires didn't see it. Game on.

Returning to the field after nearly a 10-minute delay, Bemidji relief pitcher Mitch Hendricks walked in the tying run, and extra innings were in order. But then, the game corrected itself.

Eden Prairie's defense crumbled in the eighth. The Eagles made two errors and misplayed two more balls that were ruled hits. The errant play gave Bemidji its first two runs since the second inning, the only runs Eagles reliever Dan Loats gave up in 6 2/3 innings.

"The ball never lies," Hendricks said. "[Umpires] might have made the right call, but they did it the wrong way. It was tough."

Eden Prairie overcame a 6-0 deficit. The Lumberjacks scored three runs in each of the first two innings off Eagles starter Corey Binger, but were shut down by Loats.

Mason Bellew and Leif were a big part of the Bemidji offense in its two Friday victories. Bellew finished 4-for-8 with three RBI and Leif was 5-for-9 with four RBI.

"I told the guys we just gotta keep going," Bemidji coach Mike Fogelson said about his message to his players after the game was ruled incomplete. "There was a lot of energy out there."

Eden Prairie played very different games within a few hours of each other. Halloran thought his team put together its best game of the year in a 4-0 victory over Hopkins in the morning. The defense was perfect and the pitching by Cameron Mingo even better. But after two big blows to open the semifinal game, the Eagles struggled to compete from behind.

"We played catch up all day," Halloran said. "It's a pressure situation."

Eastview 5, Grand Rapids 3: Just to make sure, Eastview returned to its ace.

With a state championship berth on the line and two runners on base, Lightning coach Tom Strey called upon Evan DeCovich.

Despite throwing seven innings and 87 pitches in a quarterfinal victory earlier in the day, DeCovich returned to the mound with plenty left in his arm. He quickly retired the next two batters to advance Eastview past Grand Rapids in the second semifinal of the night.

The school that never had won a boys' varsity championship in any sport now has a chance to win two state titles within weeks of each other. The boys' lacrosse team won the first.

A Grand Rapids victory would have set up an outstate championship game for the first time since 1988, but instead the team with the most state tournament appearances (Bemidji, 20) will face an opponent playing in its first state tournament ever.