Minneapolis Washburn found out just how thin the margin between victory and defeat can be. 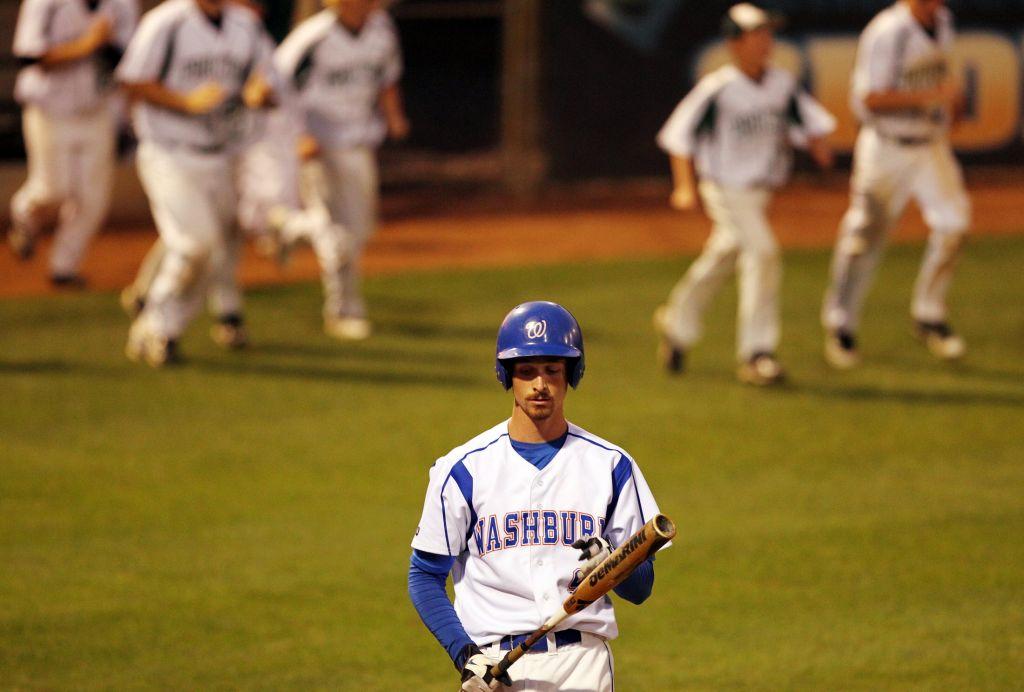 Minneapolis Washburn’s Alex Manos walked back to the dugout after striking out against Proctor for the final out.

Minneapolis Washburn found out just how thin the margin between victory and defeat can be.

The Millers, sporting a 25-0 record and an offense that scored in double figures 10 times before Thursday's Class 2A baseball quarterfinals, ran into a pitcher just as hot as they were.

Proctor, on the strength of Jake Lewis' two-hit pitching and a timely home run by Ian Scherber, ended Washburn's dream season with a 1-0 victory.

"We played well enough to win but we just didn't hit the ball like we usually do," Washburn coach Jim Clancy said. "Take your hat off to Proctor. That's a good team."

Washburn pitcher Josh Pierce nearly matched Lewis pitch-for-pitch, tossing a five-hitter and keeping the Rails off-balance with an array of breaking pitches. But in a scoreless game, where every mistake is magnified, Pierce threw a fastball that caught a little too much of the plate and Scherber socked it to left. It hit the foul pole when it cleared the fence, giving Proctor a 1-0 lead.

"When I hit it, I was just saying 'Stay fair, stay fair'," Scherber said. "I didn't think it was going over. I was running hard until I saw the umpire twirl his arm."

Clancy was philosophical as he watched hit team try to come to grip with the end of their perfect season.

"Josh pitched a great game, like he has all year," Clancy said. "We had chances, but we couldn't get the hit we needed. That's the way it goes sometimes. These guys have nothing to be ashamed of."

St. Cloud Cathedral 5, Delano 0: All season there have been questions about the defending champion Crusaders. Were they good enough to repeat? Did they lose too much to graduation?

Under Bob Karn, now in his 42nd season as coach, the Crusaders are making their 16th state tournament appearance and have won seven state championships.

The rest was left to Pelant, the Crusaders' No. 2 starter who got the nod when ace Jeff Fasching was held out because of sore ribs. Pelant retired the first 11 batters he faced and did not allow a runner as far as third base until there were two outs in the seventh inning.

Holy Family 8, Cannon Falls 0: After a soggy morning and a tedious five-hour wait, Holy Family ace Kasey Ralston was admittedly searching for his groove in the early innings of the Fire's Class 2A quarterfinal against Cannon Falls.

The University of Indiana recruit flirted with trouble for three innings, then found a rhythm and was untouchable thereafter, leading the Fire to an 8-0 victory and into Friday's semifinals at Dick Putz Field in St. Cloud.

"I've had to wait to start games before," said Ralston, a hard-throwing righthander with a big-time slider. "You just have to make sure to stay calm and not get lazy."

"It was my first state tournament start," Ralston said. "A little case of nerves."

"That was an incredible feeling," said Knoll, who went 3-for-3 with two RBI. "When I got back to the plate, I could see everyone's faces all lit up."

With a two-run lead, Ralston tightened the screws on Cannon Falls (20-6). After eight of the first 14 Cannon Falls batters reached base, Ralston allowed only one baserunner through the final four innings. He finished with a complete-game three hitter, striking out six.

More at ease, Holy Family (23-4) put the game away with a five-run sixth inning, taking advantage of two Cannon Falls errors. The Fire added an insurance run in the top of the seventh.

The Cardinals (25-3) were making their third consecutive trip to the 2A tournament. Roseau (20-6) was there for the first time. That, said Fairmont coach Todd Sukalski, was the biggest factor in the Cardinals' victory.

"I think it's worth at least a couple of runs," Sukalski said. "The past two years, we've made errors in the first innings of our games. Today, we played a clean game."

At first glance, Fairmont pitcher Spencer Chirpich might have looked like the antithesis to Sukalski's theory. A first-year freshman who barely weighs 150 pounds, Chirpich pitched like a veteran. He gave up only one earned run, scattered five hits and struck out five, outdueling Roseau senior Logan Hulst.

"He's probably played more baseball than anyone else on our team," Sukalski said. "He plays amateur ball, [American] Legion ball. We played six games against ranked teams this year, and he's started and won the all."

Chirpich had the added bonus of an early two-run lead, thanks to Michael Forster's two-out, two-run single in the bottom of the first inning.

"Those two runs were huge for us," Chirpich said. "All I had to do was go out and pitch my game."

Now skilled in handling state tournament pressure, the Fairmont players were all business after the game.

"We've got two more games to win," said Forster, a senior first baseman. "We've been here before, we're relaxed, we know what to expect. So far, so good.