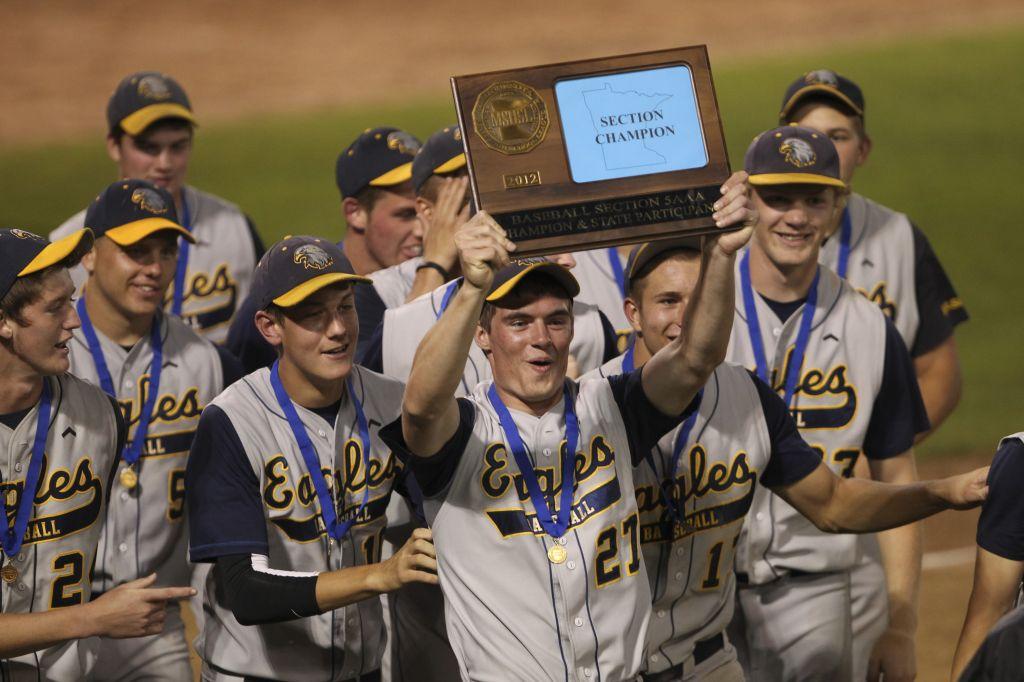 Jacob Lentner held the championship trophy aloft last Wednesday after Totino-Grace won the section championship. The Eagles qualified for the state tournament for the second time in the program’s history and the first time since 2006. Photo by Jeff Wheele

Members of the Totino-Grace baseball team waited out a lengthy rain delay during last week's Class 3A, Section 5 championship game in a casual manner.

"We had guys in the locker room lying down," coach Mike Smith said. "We had guys playing games on their phones. Some guys went and grabbed a hot dog."

Smith didn't mind. His guys made a season out of being loose but never lackadaisical. The Eagles brought renewed focus to the field, erased a 3-1 Maple Grove lead and earned a 6-5 victory and a state tournament appearance. They play Grand Rapids at 5:30 p.m. Thursday at Midway Stadium in St. Paul.

"That just kind of plays right into our deal," Smith said of the rain delay distraction. "We have guys that don't mind goofy stuff."

The Eagles made a playoff run out of shrugging off strange circumstances. Wet weather caused the first-round game against Champlin Park to be rescheduled five times in a two-day period. To top it off, the teams moved to a lighted field to finish the game.

The Eagles saw their 7-2 lead become an 8-7 deficit. They were down to their final three outs before rallying to tie and later winning 9-8 in 10 innings.

Unranked and carrying the No. 4 seed, Totino-Grace upset No. 2-ranked and No. 1 seed Maple Grove 4-3 on May 30. Matt Leuty scored the winning run in the fourth inning after being hit by a pitch, advancing to third on a throwing error and scoring on Sam Meyer's sacrifice fly.

The Eagles moved into the title game with a 13-2 thrashing of a Robbinsdale Cooper team they could not beat in two previous tries this season. Maple Grove, which lost last season's Class 3A championship game when Burnsville rallied with six runs in the bottom of the seventh inning, fought back to face Totino-Grace once again.

Maple Grove led 3-1 in the bottom of the fourth inning when the rain began falling, forcing a 1-hour, 23-minute suspension of play.

"It was a great time for a rain delay," senior Bob McDaniel said. "They were just getting their momentum, and the delay kind of brought that to a stop. We wanted to come out hard after that, and that's what we did."

When play resumed, the Eagles scored four runs to take a 5-3 lead. They did not flinch as Maple Grove responded with two runs to tie the score. McDaniel started the sixth inning with a walk and scored on an opposite-field single from Ben Petersen.

The Eagles proved both unflappable and flexible as Smith tinkered with the lineup throughout much of the season. He estimated using "five different leadoff guys and four or five different designated hitters, No. 4 and No. 9 hitters."

"Early on it probably tested morale because everyone wants to start," Smith said. "But once they got past that and focused on the team stuff, they were pretty good."

Settling into a more firm lineup just in time for the playoffs, the Eagles saw through rain, rescheduling and rallies to earn the second trip to state in program history and first since 2006.

"That's just kind of how our guys are," Smith said. "Earlier in the year, we were kind of like, 'Somebody get excited about something.' But we've realized that's how they are -- that even-keel attitude."