Despite losing out in the section finals three years in a row, Eastview isn't just happy to make state. 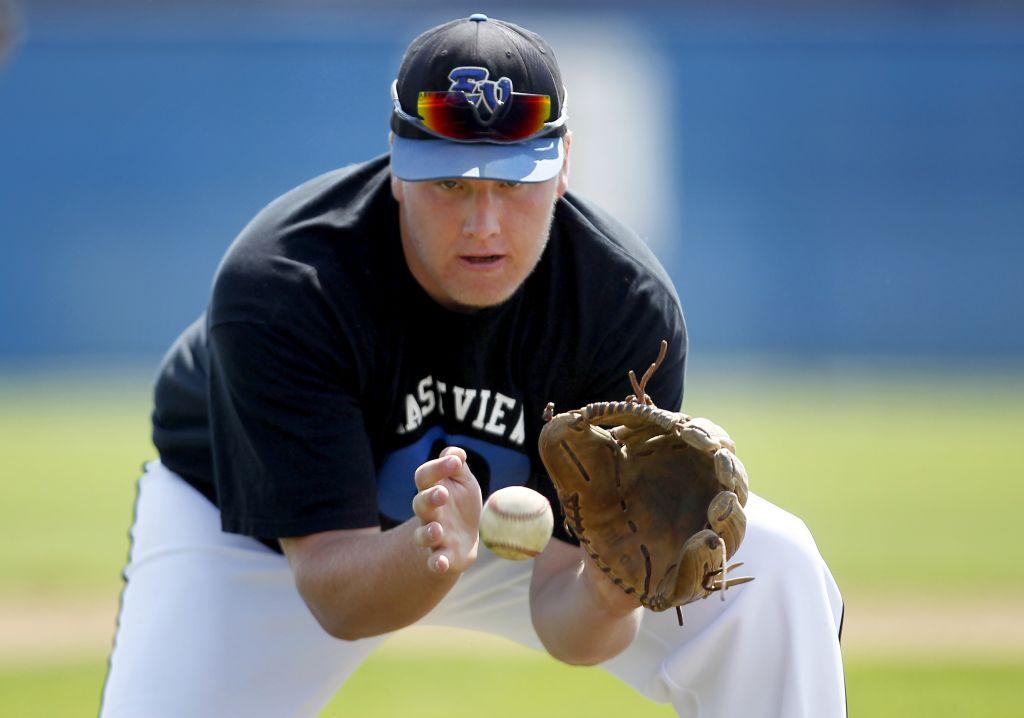 Evan DeCovich fielded a grounder during practice last week. The pitcher leads Eastview with a 6-1 record and 59 strikeouts to go along with a 0.46 ERA. He’s also the team’s leading hitter, batting .463 with three home runs and 28 RBI. Photo by Carlos Gonz

Now, can some of the magic wear off to make it two titles in as many weeks? That's certainly Eastview's hope.

It faces a Wingers team that has just one blemish on the schedule -- an 8-4 loss at Chanhassen in early May. Otherwise, it's been a dream season for the Wingers (22-1), who averaged more than seven runs per game in their section tournament.

That, however, is not high on Tom Strey's list of concerns. He's far more interested in seeing what else Lightning players have up their sleeves.

"We have a lot higher goals than just getting there," Strey said. "This is the type of group where you set something out in front of them and they are going to do everything they can to try and achieve it. We took a couple of days to feel really good about what we did in the section tournament. But we're focused now."

The senior-dominated group played most of the year without pitcher Adam Moorse, who was 4-3 as a junior but has since battled an injury. Instead, the team was led by pitcher Evan DeCovich. The righthander leads Eastview on the mound with a 6-1 record and 59 strikeouts to go along with a 0.46 ERA. He's also the team's leading hitter, batting .463 with three home runs and 28 RBI.

"It's fun to see him have this kind of success; he's grown so much as a competitor,'' Strey said. "He has it in both departments. You think it would be a heavy burden to have to do both, but he doesn't feel that pressure. He doesn't try and do too much. He'll take a walk in the No. 4 spot and know he has teammates behind him who can drive in runs also. And he doesn't try and strike everybody out. He trusts the defense."

It's a level of maturity that has blossomed out of this group as a whole.

Most of the players came up together, earning success in traveling leagues as middle-schoolers. This included a trip to Cooperstown, N.Y., for a tournament when the current seniors were 12-year-olds. They won five games in one day during that marquee event, and later won Minnesota AAA traveling state championships as 13- and 14-year-olds.

Recent regular-season triumphs have failed to yield postseason positivity, but the team never lost sight of the ultimate goal.

"I would say this is more like years in the making, not weeks in the making," said Strey, whose son, Patrick, is a senior on the team and pitched Eastview to a signature 3-2 victory in the section quarterfinals. "The group has hung together. The team is bigger than just the parts."