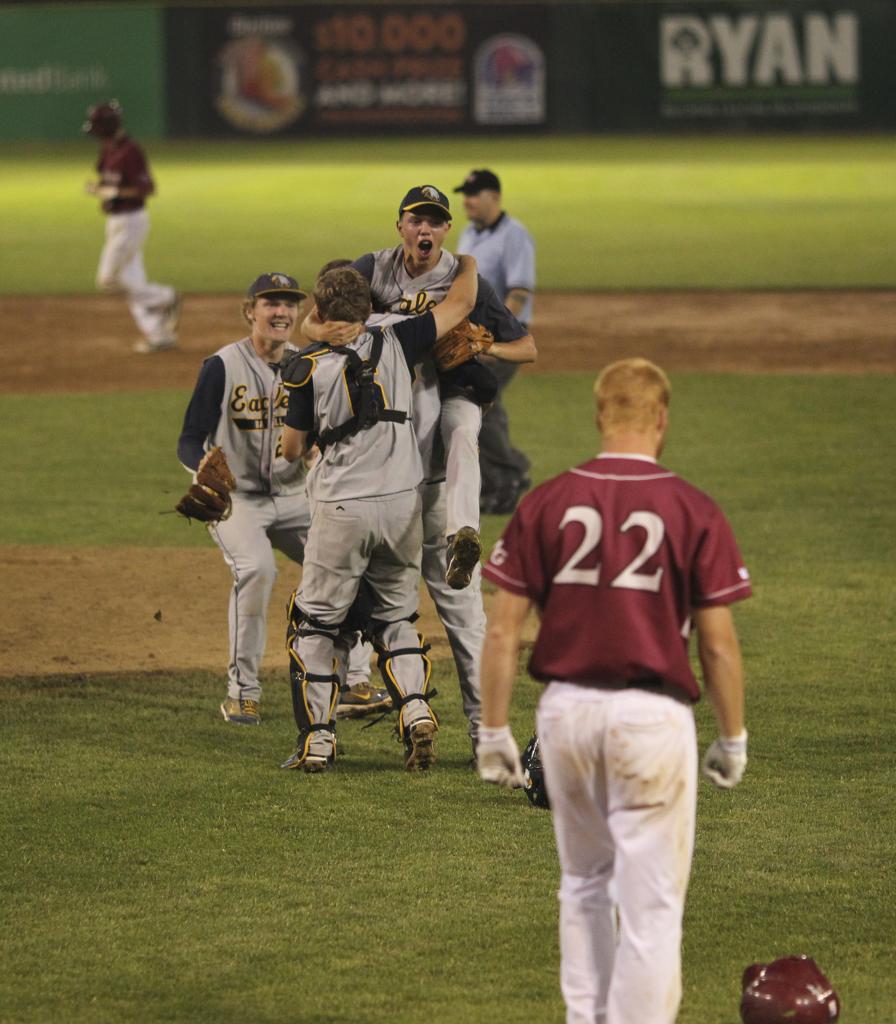 Totino-Grace’s Matthew Stroh was met at the mound after Maple Grove’s Mitchell Bauer, foreground, lined out to end the game.

Totino-Grace waited six years and one long inning to return to the Class 3A state baseball tournament.

The Eagles upset No. 2-ranked and No. 1-seeded Maple Grove 6-5 in the Section 5 final played Wednesday at Midway Stadium in St. Paul.

Trailing 3-1 in the middle of the fourth inning, the Eagles got a walk from Marco Lucarelli before rain forced a 1-hour, 23-minute delay. When play resumed, the Eagles got hot. They scored four runs to take a 5-3 lead and reclaim momentum.

"That's just kind of how our guys are," Eagles coach Mike Smith said. "There was no secret formula. They can get into it and concentrate even after they've been away from it for a while."

Maple Grove (20-5), which lost last season's Class 3A championship game when Burnsville rallied with six runs in the bottom of the seventh inning, show resiliency by tying the game 5-5 in the fifth inning.

Joe Franta started the inning with a walk and Roman Collins drove him in with a double. Collins later scored to tie the game.

Totino-Grace got the last word as McDaniel started the sixth inning with a walk and later scored on an opposite-field single from Ben Petersen.

Unranked and No. 4 seed Totino-Grace (16-7) beat Maple Grove 4-3 earlier in the playoffs on May 30, a victory that built the Eagles' confidence.

"That definitely helped," McDaniel said. "We knew they are not the New York Yankees and we could beat them."

Totino-Grace advances to play Grand Rapids in the state tournament quarterfinals at 5:30 p.m. on June 14 at Midway Stadium.