The making of a phenom 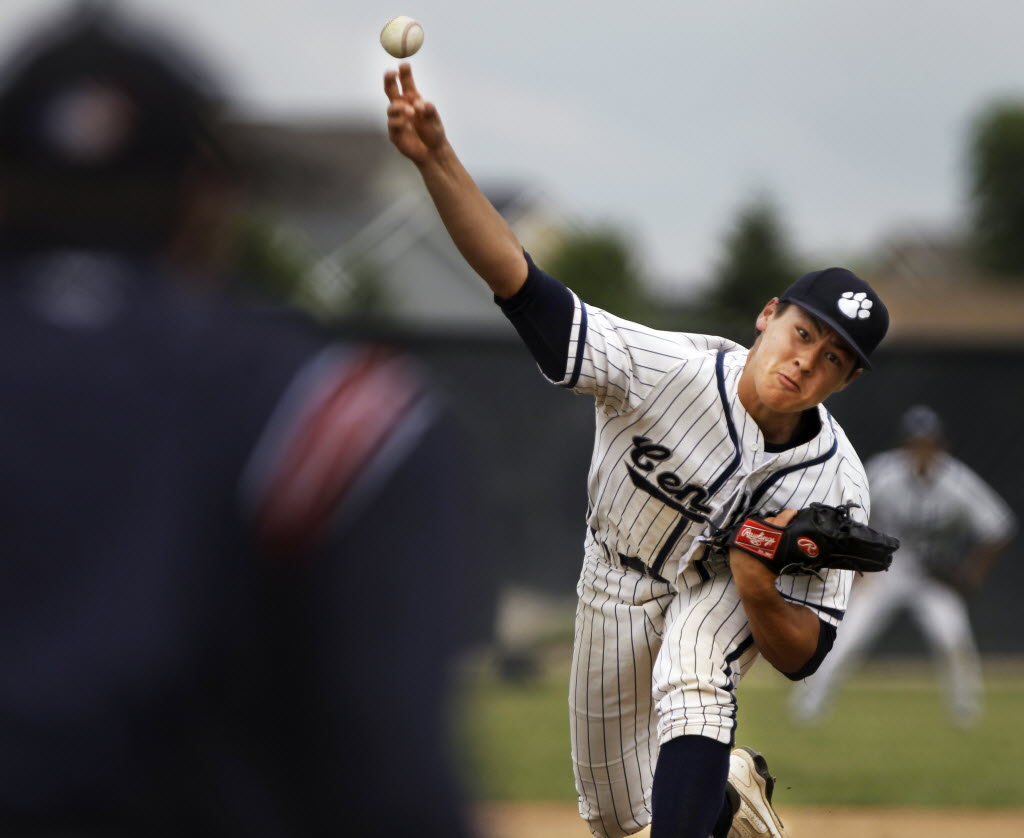 Rochester Century pitcher Mitch Brown is projected to be drafted in the first three rounds of the MLB draft. Brown throws in the mid 90's and has an extensive warm-up routine. Richard Tsong-Taatarii, Star Tribune

ROCHESTER - Planted behind the backstop of Rochester Century High School's baseball field is a single bench. This season it's become unofficially reserved for a specific group.

The professional baseball scouts earliest to arrive position themselves here to catch a close-up glimpse of the hype surrounding pitcher Mitch Brown. As he begins his delivery, the mass of scouts lift their radar guns in anticipation.

Finally, the baseball pops into the catcher's glove and the number "95" appears.

Ninety five, 94, 93 miles per hour, consistently and accurately, and mixed among formidable offspeed pitches, convinced this group Brown is special.

The 18-year-old with the state's most fawned-over pitching arm could become the first high school prospect from Minnesota drafted in the first round since Joe Mauer. Baseball America rates Brown the 44th-best prospect in the country, projecting he will be selected Monday in the first day of Major League Baseball's first-year player draft.

"This kid has separated himself," said Blair Henry, Boston Red Sox area scout, after driving four hours to see the 18-year-old pitch in the Class 3A, Section 1 playoffs. "When you have 30 to 40 scouts out here, that tells you something."

Admittedly a bit overwhelmed at seeing 40-plus scouts line the fences for the Panthers' first game, Brown did not disappoint. The flock continued to gather each time he took the mound.

The righthander throws a 95 mph fastball, sharp-breaking curveball, 86- to 88-mph cutter and quality changeup. His physical maturity -- 6-foot-2 and a lean 215 pounds -- stands out at the high school level. Scouts praise his mechanics and delivery. His demeanor and mental toughness complete the package.

"He's by far the most dedicated and mature kid I've had," Century coach Keith Kangas said. "It's a big world and there are a lot of good players out there. But it's the little things that separate them and he knows that."

Sitting in the office of University of San Diego baseball coach Rich Hill two summers ago, Brown didn't know his worth.

"I was just trying to get my name on the map," said Brown, then still under 6 feet and throwing in the mid-80s. "I didn't know it could get much better."

Hill and his staff assumed otherwise. Two weeks after Brown pitched at a showcase on campus, he was offered a full scholarship. He accepted.

Then he grew. Each summer produced 20 pounds on his frame and an extra 5 to 10 mph on his fastball. Within a summer, Brown went from Minnesota standout to national prize.

"People kept asking me how I did it," Brown said. "It's definitely been a work in progress with putting in time in the weight room. But physically, I just grew into my body.

Calls and letters from colleges were replaced by those from major league scouts. In his senior year, an average of 20-plus organizations, including the Twins, were represented at each game. Even General Manager Terry Ryan took in a game.

"Both [college or pro ball] are great opportunities," Brown said. "I can't make a bad decision.

"I really feel like I'm responsible enough to handle the rigor and stress of a major league season. But it's going to have to be something special to sway me away from college.''

A mile-and-a-half road of dirt and rocks leads to a baseball sanctuary in northeast Rochester.

The centerpiece is a converted garage full of exercise equipment. On the walls of this homemade gym -- stocked with a tractor tire, weighted ropes and a wooden mound -- are motivation and instruction, pinned up next to photos of its No. 1 customer.

"Look at Josh Beckett's picture. You see the similarities," said Jeff Brown, comparing his son to the Boston Red Sox pitcher. Part of the training that Jeff oversees includes mirroring the mechanics of big leaguers. "We do some weird things," he said.

Whether Mitch flips a 150-pound tire for 30 seconds or analyzes hours of video from past starts, his dad says it's all done with the purpose of "preserving his arm."

Jeff Brown, a 55-year-old former athlete, instilled his work ethic on Mitch at a young age. Jeff challenged his then-10-year-old with push-ups, sit-ups and squats.

"I remember the first time I saw him with a weight belt on and chain attached to it and he was dragging a tractor tire around outside, I thought this is a little over the top and kind of crazy," Mary Brown, Mitch's mom, said with a chuckle. "But I knew it was OK when he asked to do it again. Mitchell has always driven this."

Consider his dedication to his training after his team advanced to the section semifinals with a victory Tuesday. Instead of celebrating his 15 strikeouts with a piece of cheesy pizza, he indulged himself with a protein shake and a trip to the Rochester Athletic Club for another hour of work.

His rigorous postgame routine is a necessary step in the recovery of his arm. He explained the science of removing lactic acid from his bloodstream after a half hour on the treadmill, 20 minutes running sprints and some core exercises. Then it was off to the lap pool.

"Definitely most kids don't go home and decide to do push-ups. But my dad was pushing me," Mitch Brown said. "At times it was tough. There were times where I would just say 'I wonder if this is worth it?' Now I look back and thank my dad every day for being the driven guy he is to drive me to do what he knew I could."

A phone full of messages greets Brown at the end of most school days.

Questions regarding his next start, the health of his arm, or medical inquiries require his attention.

"It's been a little bit stressful, but it's the job," Brown said. "It does get monotonous getting phone calls, e-mails, voice mails, text messages. But obviously in the end it's all the better for what you want to be doing, and for me that is being a major league baseball player."

This demand forced Brown to mature in ways he didn't even realize he had. Fellow school athlete Brian Christenson listened to Brown explain his uncertain future: college or professional baseball? The magnitude of the conversation was a lot even for Christenson.

"He said, 'It's crazy, you've just grown up so much faster than everyone else,'" Brown recalled his friend saying. "I didn't realize it, but it's true, 'cause in three weeks, I could be on my own living in hotel ... fending for myself. The time has flown by."

He still found time to take his girlfriend to prom and celebrate his graduation with family and friends. But Brown mostly enjoys the demand baseball requires and he won't let himself forget it.

Taped on the wall in his bedroom is a newspaper article from last year's section playoffs, with the headline "Mayo's Zywicki outduels Century's Brown." Brown clipped the full story to remind him of each detail of work that needs to be done.

"Once you see that in the morning, there is no turning back and going to bed," he said. "I've got business to do."

Minnesota high school pitchers who have been selected in the first five rounds of baseball's amateur draft: 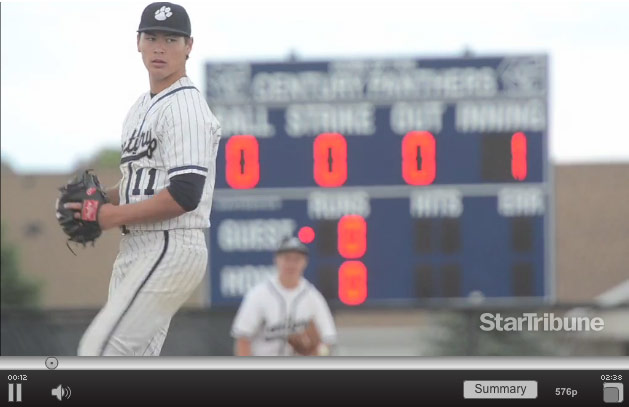 While scouts from the around the country admire Mitch Brown's 95 miles-per-hour fastball, hitters fear it. It's common for the Rochester Century pitcher to collect double-digit strikeouts each start. Here's a look at his impressive regular season.

Rated the 44th-best prospect in the nation by Baseball America (16th-best righthanded pitcher).

Draft at a Glance

Monday: First round and supplemental picks; Twins will pick No. 2, 32 and 42 overall