Cory Quinlan, from a family with deep Pioneer roots, leads with hitting and defense. 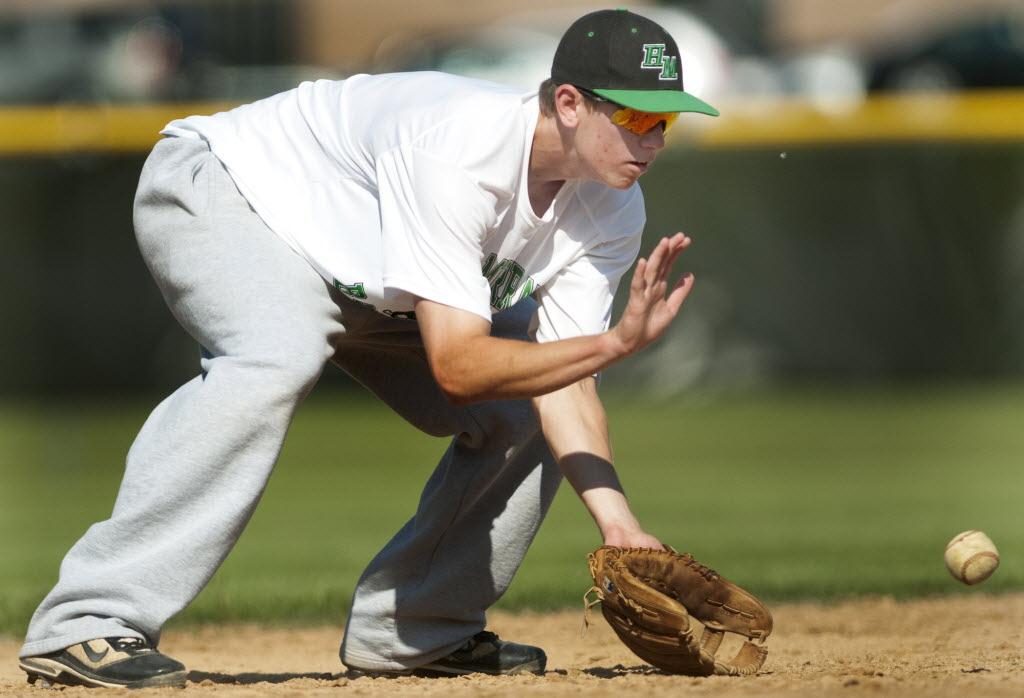 Hill-Murray shortstop Cory Quinlan fielded baseballs during a Pioneers practice. Hitting hasn’t been a problem for Quinlan, who has been batting more than .500 this season, and he has worked to elevate his defensive game as well. He has played a key role

Cory Quinlan has been around baseball all his life.

As the son of former Major League Baseball third baseman Tom Quinlan and the nephew of both Robb and Craig Quinlan, he never really had a choice.

"He grew up having me play professional baseball for 16 years, so for the first eight to 10 years of his life, he was around it all the time," Tom said. "It's kind of always been his first love. He's kind of gotten to travel the world a little bit following me."

Tom played for the Blue Jays, Phillies and Twins. Robb played for the Anaheim Angels for eight seasons after starring for the Gophers. Craig was drafted in both the MLB and NHL.

It wasn't forced upon him, but Cory just naturally became a baseball nut. He got a chance to follow dad around the country and even visited him two consecutive summers when Tom played professional baseball in South Korea. They would have lunch together, head to the ballpark and play whiffle ball on the field.

That hasn't changed much. Tom might have retired years ago, but he serves as the assistant coach at Hill-Murray, where Cory stars at shortstop. Tom, Robb and Craig all played for current head coach Bill Lechner at Hill-Murray.

"That's how old I am," Lechner said with a laugh. "Second generation."

But Cory has been a first-rate and a huge part of the 13-1 Pioneers, sitting comfortably in the Class 3A No. 3 ranking.

The Pioneers play solid defense, a component of the game that has become increasingly important with the new BBCOR bats being used in the Minnesota State High School League. Less pop at the plate means more opportunities to make defensive plays.

Fortunately for Hill-Murray, Cory has elevated his glove work from good to great the past two seasons. Dad was always known as a premium infielder, and Cory has followed suit by only committing just one error at a premium position.

"I knew ever since I was little that he was great defensively, and I've always wanted to be a great defensive player just like him," Cory said of his father. "It's always pushed me."

But what Cory is most well-known for is his hitting. As of Tuesday, he was batting .520 with 26 hits, 17 runs, 12 RBI and six stolen bases. He was the top hitter in the state for much of the season before slipping down a couple spots. Much of that success can be attributed to dad, who oversees all hitting instruction at Hill-Murray.

Even though he has genetics behind him, Cory still pairs his family resources with a tireless work ethic.

"There's a gift in there in the Quinlan genes but Cory also knows that he has to work to achieve and keep pushing," Lechner said.

Cory's strides in the past couple seasons have been helped by having high-level mentors.

"He knows more things than most coaches know" Cory said of his father. "He can pick apart the little things. All the fundamentals -- ever since I was little -- I've been taught the right way."

While his skill, statistics and character are the most visible of Cory's attributes, they are not the most important, according to his dad.

"Now he's getting his chance to write his own story."