Pitcher Ben Albert doesn't let what he calls a 'short arm' impede his many athletic pursuits. 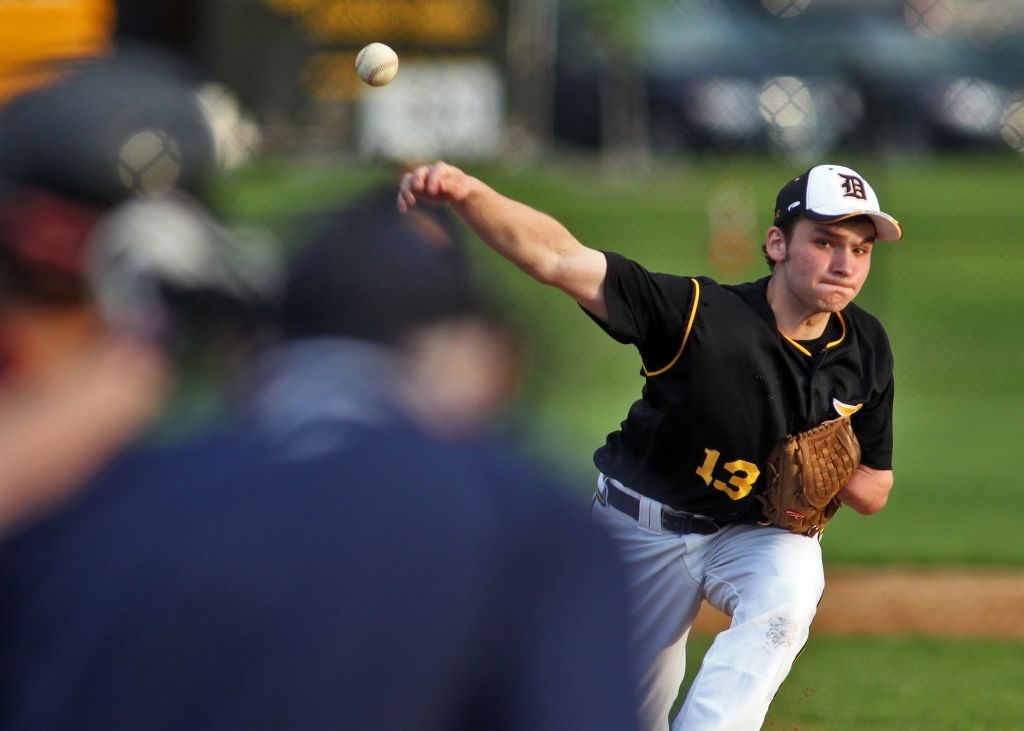 Ben Albert is a starting pitcher for DeLaSalle High School.

Standing in the middle of the diamond with a baseball in hand, Ben Albert is complete. It's here, propped on a 10-inch pile of dirt, where the DeLaSalle High School pitcher has found a place of fulfillment.

In a routine that has become as normal as adjusting his cap, Albert waits for a return throw from his catcher at the bottom of the hill, right arm raised. He catches the ball and tucks the flattened Rawlings glove under his left armpit. He pulls out his hand, grabs the ball and climbs back on the mound to pitch again.

The unique transfer is Albert's solution to a birth defect known as hemimelia, which left the 17-year-old without any bone structure below his left elbow. He refers to it as his "short arm."

Considered a disability to the rest of the world, it has been anything but to Albert, now his team's top starter.

"When I'm out on the mound, it's the last thing on my mind," he said. "I feel just like anyone else."

In his third year in the varsity starting rotation, Albert is finding out he might be good enough to pitch in college. This season the Islanders ace is 3-2 with a 3.19 ERA. With a fastball topping out in the low 80s, he relies on pitch location and two off-speed pitches to survive in the Tri-Metro Conference.

His feats are nothing special to the humble three-sport athlete, who also carries a load of advanced-placement classes at the private school near downtown Minneapolis. Since his condition is all he's ever known, he sees it as no excuse to underachieve.

The junior's goals are lofty. He wants to be an everyday player this spring, play varsity soccer next fall and move from junior varsity basketball to a spot on DeLaSalle's defending Class 3A championship team next winter.

"Once in a while, there is something that is harder or something I just have to adjust to different than someone else would," Albert said. "But since that is how it is with everything, I'm just used to it.

Rising to the occasion

Accustomed to defying expectations his whole life, Albert quickly made a statement upon his arrival at DeLaSalle. In his first junior varsity start as a freshman, he did not allow an earned run. The outing caught the attention of varsity coach Douge Schildgen, who happened to need pitchers.

"Never even thought twice about [his arm]," Schildgen said. "I thought he handled himself well."

The call-up to varsity was halted briefly by Albert's concerned parents. Unsure how the pressure and extra attention would affect their son, they cautioned him to pass on the opportunity.

"It's not like you won that battle," Albert recently reminded his dad, Sam. Albert went 4-0 that year, something his father still recalls with pride.

Sam's well-intentioned attempts at limiting Ben have stopped. Now he reassures himself and others that his son can do more than just pitch; he can also play first base, third base and outfield.

However, outside of a handful of at-bats and an occasional appearance in the field, Albert's role has been limited to pitching. His swings of the bat have lacked the consistency required to earn a regular spot in the lineup. But he won't give up trying to persuade his coaches.

"I don't say I want to play because I want to seem not different," he said after collecting a pinch-hit base hit against Brooklyn Center. "I just want to play like any other player. I just love playing sports and I love baseball and I want to be out there playing. Hitting is fun. ... Playing in the field is fun."

Close friend and teammate Jalen Wilson is convinced Albert can be an everyday player, calling him the best first baseman with whom he's ever played.

"My biggest thing was how fast he could transfer his glove from his hand," Wilson said. "It's ridiculous."

No room for 'There, there'

Packed away in the Albert house are clippings of hope.

Throughout the years, Sam Albert and his wife, Beth Stockinger, saved articles highlighting the feats of one-handed major league pitcher Jim Abbott. They showered their son with the words and pictures of encouragement, hoping that one day Ben could achieve whatever he desired.

As Ben grew, he drew inspiration watching YouTube videos of Abbott. Staring at his computer screen, he felt a bond with someone he's never met or watched play. Highlights, however, were enough for him to regard the now-retired player as his role model.

"He kind of looks like me, I guess," Albert said before explaining Abbott has something he doesn't -- a forearm.

Aside from fielding occasional questions from curious children, he rarely speaks about his arm.

Even at home it's hardly mentioned. On a game night in late April, Albert's parents -- both psychologists -- talked tentatively about raising a son with one hand.

"I want to be protective of your privacy," his mother said. "Are we embarrassing you?"

Ben reassured them he was OK as he devoured a plate of food and balanced it with his short arm.

His parents revealed to him that they've often tried acting out basic life skills using only one hand. They also shared past worries about his happiness.

These open comments had been filed away during Albert's adolescent years. Eventually, the family's acceptance of his disability became such that it was unnoticed.

But the memories of its challenge linger. Stockinger recalled watching her son scoop ice cream onto a cone tucked under his left armpit. The oddly placed shirt stain was a reminder he was different.

"Parents said, 'Whatever you do, don't lay your own paradigm on him,'" Stockinger said. "I was concerned coaches or people would go, 'There, there,' and I wasn't going to allow that."

Prefers unique to blending in

Determined and motivated, Albert has never allowed pity into his life.

In the halls and classrooms of DeLaSalle, students flock to the chatty teenager. If his collared shirt and khaki shorts blend in with the masses, his vibrant personality and long sideburns stand out most.

He prefers being unique to blending in. A 4.0 grade-point average and class schedule full of AP and honors classes are enough to differentiate him, but he's referring to his "challenge."

"I don't know if people notice it, or they don't want to offend me, but no one I'm friends with treats me different," Albert said.

Watching Albert run drills at a recent practice, student manager Ally Hommerding summed up the DeLaSalle student body's perception of their classmate. "He's kind of the joker of the team," she said.

When Hommerding met Albert, she was intrigued by his arm, but since then, she said, she never notices it. "I can't even tell," Hommerding said.

When he's blowing his horn in band class, no one sees anything different about Albert. They only hear the tune of his trumpet.

Prepping for a quiz in his comparative religions class, three girls surround Ben, if not seeking his help then his attention. He likes the crowd hovering over his desk, later saying, "I make it a point to have a lot of friends that are girls."

Admiration for Albert reaches beyond his peers. When administrators and teachers hear his name, the response is universal: "Ben is a great student."

Albert was reminded he's different as he reached for his share of the Class 3A boys' basketball state championship in late March.

Climbing the ladder to cut down a piece of the net at Target Center, he hesitated for a moment. Nearing the top of the steps, he began to lose his balance. With scissors in his hand, he had nothing else to reassure his frame.

Such moments become another opportunity to overcome a new challenge. This mindset has helped Albert succeed in soccer, baseball and basketball. When he was younger, he played every sport he could, including football and golf.

"He always had the arm," said his dad, explaining his role on the football field.

Albert credits playing to his strengths, which were often his time and willingness to do whatever was asked of him, for helping him succeed. He hopes this commitment helps him earn a spot on the renowned basketball team next season.

Can he do it? He chuckles at the thought.

"If you can dribble well with one hand, at least in high school, you can get by with some stuff," he said. "I shoot all right. I mostly just hustle, and that can get you playing time, regardless if you can dribble with your left hand or not."

"He believes in himself," Wilson said.