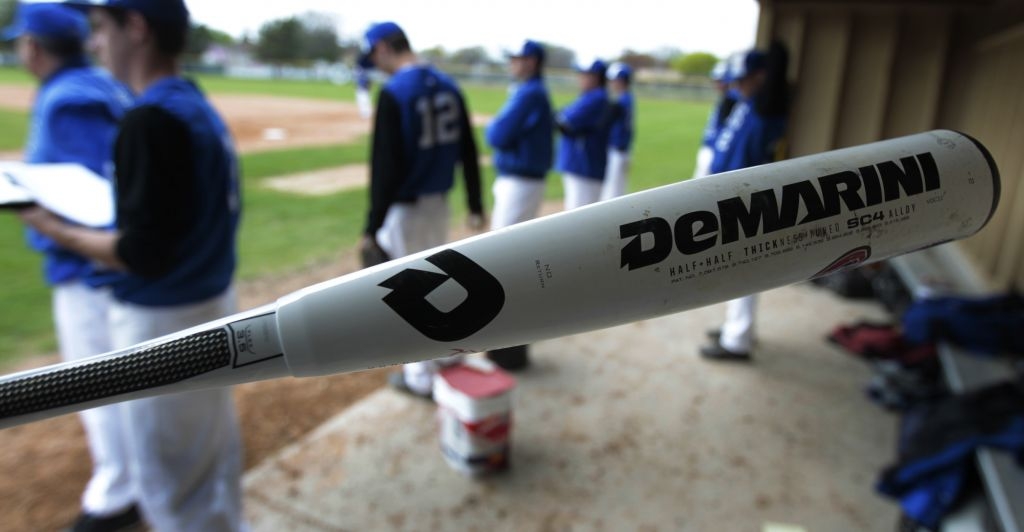 The new BBCOR-certified bats are required for use by high school teams this season, after being introduced at the college level last year.

It doesn't take long to recognize what has changed this spring in high school baseball. The sound of the bat gives it away.

At the moment of contact, an unfamiliar sound fills the air. It rings like a mix of metal and wood on diamonds throughout Minnesota and the rest of the country. But what happens next is the real change.

Baseballs travel shorter distances and at slower speeds than they did a year ago. Taking the sometimes lethal edge off wicked line drives is the intended result of the new BBCOR-certified bats, first introduced at the college level last year, in the latest effort to improve player safety.

"We've scored eight runs in three games and we are undefeated," Minnehaha Academy coach Josh Thurow said after his team's third victory of the season. "And we've only given up one run. It's tough to score."

Bunting and base stealing have become more prevalent as teams try to manufacture runs. Finding ways to score has left some coaches perplexed and the lower scores have put a premium on defense. Pitchers have benefitted.

"It's definitely on the forefront of our minds," Eastview coach Tom Strey said. "[The players] are used to playing the game with the old bats. Now they come in and say 'Oh, that would have gone out last year.' So we're trying to adjust."

It requires a mathematical equation to explain the technology and most players can't explain what's changed about the bats. But it boils down to this:

A new formula called Batted Ball Coefficient of Restitution (BBCOR) limits the pop, or trampoline effect, that the ball has off the bat. The formula significantly decreases bat power, with reinforced alloy walls holding their shape more so than previous metal bats and subsequently diluting the energy that a ball carries from pitch velocity.

Dave Glenn can appreciate the change. Four years ago, in his final season of a 42-year stint as Minnehaha Academy head coach, he was hit in the face while throwing batting practice. It was the perfect storm: his best and biggest hitter, swinging the most potent bat. His broken jaw was a reminder he didn't have time to react.

Several baseball-related deaths around the country caused by weapon-like metal bats intensified pressure on the National Federation of State High School Associations to find ways to limit such batted-ball accidents.

"What we do is try minimize the risk," said Elliot Hopkins, NFHS baseball rules editor and national interpreter for the country. "This is the best science available that we've identified for making a bat to perform as close to a wood bat and holding a piece of lumber in your hand."

Flashy designs and odd names still cover the metal faces of bats, but what most players have concluded is that they swing like extremely durable wood bats. Hopkins said it is like swinging "non-wood wood bats."

Minneapolis Washburn players attempted to prove there was no difference early in the season. Led by senior Zach Austin, members of the team picked wood over the new BBCOR. Most have switched to BBCOR since, but at St. Croix Lutheran, the top third of its lineup has opted to use wood.

"Wood and BBCOR take quite a bit of carry off the ball," Austin said after hitting a home run with a wood bat. "I like the wood bat better. The sweet spot is just a little smaller."

The BBCOR bat's sweet spot has generated lots of talk among players and coaches. Last year's college season identified a small section of the new barrel that produces the best results, which at times is even comparable to the recently outlawed bat, measured by a standard called Bat Exit Speed Ratio (BESR).

In response to this observation, coaches have stressed the importance of hitting mechanics to maximize benefits of the sweet spot. DeLaSalle coach Douge Schildgen thought it would be most beneficial to require his team to swing only wood during preseason workouts.

Stamped near the top of each bat is a reminder of what's changed. However, most high school athletes don't need to see the "BBCOR certified" logo to admit there is a significant difference from last year's bats to this year's new crop. For optimists like DeLaSalle infielder Jack Duffy, there is no difference between BESR, BBCOR and wood.

"You just gotta find a groove," Duffy said. "It's all a mental thing. I think you just have to have the same approach as with a composite or a wood."

At 6-foot-4 and 230 pounds, the large-framed senior is the prototype for high school baseball's new bat. He has already capitalized on his sweet spot training, collecting two home runs early in the season while the majority of the rest of the country is still trying to figure out how to swing its new tool.

"The strength of the player shows up way more now," Schildgen said. "If you don't have physical strength, you are in trouble."

Mixed in the masses of the BBCOR's new clientele are some who argue against too much change to a sport that invariably involves risk.

"We give our kids a license to drive a car 70 miles per hour on a highway at 16 years old and we are afraid of a batted ball killing them?" Sauk Centre High School coach Bryan Zollman said. "If everyone is so concerned about safety, go to wood bats and be done with it."

Such thinking isn't that uncommon among high school coaches. Thurow said he wishes the national high school federation would have adopted something in the middle. The jump to BBCOR may have been too much, he said.

"I think a lot of us are going to wish we could go back (to BESR)," the Minnehaha Academy coach said. "But now if we try to go back, everyone is going to say we don't care about safety. Now I think we're stuck.''

St. Anthony Village provided DeLaSalle a clinic on new ways to win in the 2012 Black and Blue rivalry. St. Anthony stole six bases and relied on a strong pitching performance by Jordan Wiggins to win a powerless-hitting exchange.

Wiggins, like many high schools pitchers have begun to do, spends more time placing his pitches on the inside half of the strike zone. The new bat allows hurlers to comfortably pitch inside without the fear of being hit out of the park. No more fluke home runs and fewer bloop hits.

"It definitely doesn't feel the same as it did last year," Wiggins said. "Mistakes aren't taken advantage of as easily for the hitter. If you leave one up, it isn't always going to be a bomb. It changes situations and hitting counts. You want to be more selective."

"I think over the course of our season, we are going to see a serious drop in offense," Halloran said. "It's probably good for our game and especially the college game."