Hopkins on the verge?

A no-longer-young Royals team is poised for "a special season,'' their coach says. 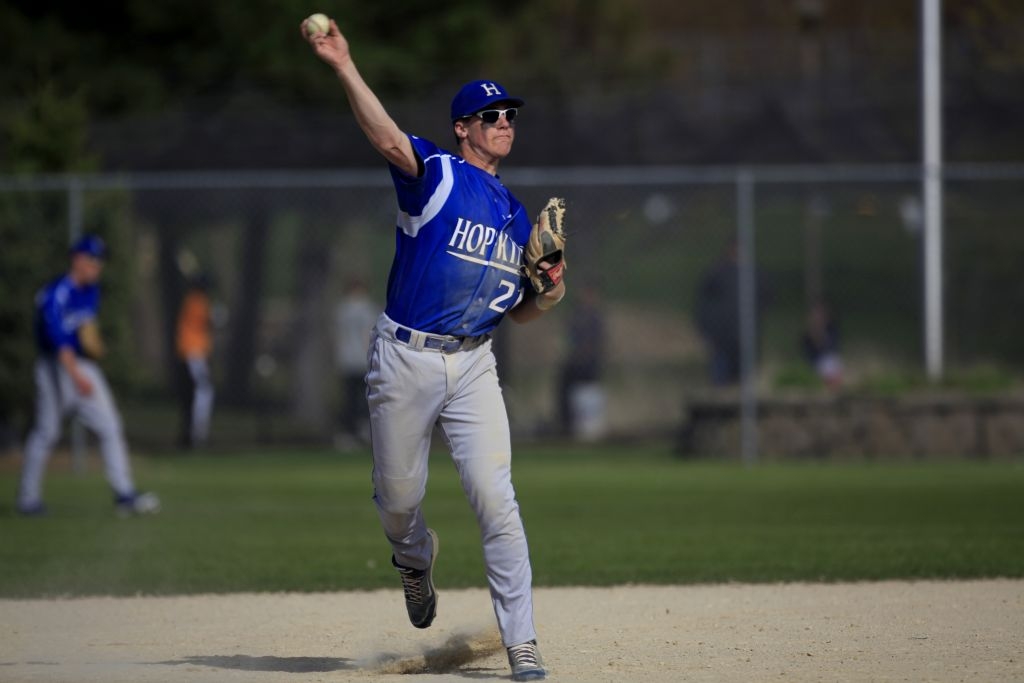 Third baseman Joey Brettingen fired a throw across the diamond Thursday, when Hopkins defeated Apple Valley 8-0. The Royals are 3-0 early on this season, with two shutout victories. Photo by JOEL KOYAMA • joel.koyama@startribune.com

Tim Shannon doesn't have to shake off many pitches.

"When he's on, he's on and he's locked in," Hopkins third baseman Joey Brettingen said. "You get that guy going and no one is going to stop him."

But the senior righthander still has to stave off early-game butterflies, even as a three-year starter for the Royals.

Then the outs start piling up.

"And I don't think, I just throw," Shannon said. "Thinking is for off days."

Shannon was one of six Hopkins players thrust into starting roles two years ago. They have emerged as polished veterans for a team creeping up the improvement ladder.

Coach Neil Lerner remembers how he raised more than a few eyebrows about his inexperienced squad a couple of years back. Now, he refers to this year's club as "their program."

"They've got themselves into a position where they've earned a lot of the success," Lerner said. "These were kids who were the best players at the time, and the philosophy I have is as long as the kid is a good kid and works hard, we're going to put the best players on the field. This is their time, and I really think they can have a special season."

Albeit early on, it has been so far. Hopkins entered the week 3-0 in the young season, relying on a mix of dominance and perseverance. After shutout victories over Minneapolis South and Apple Valley, the Royals took on Benilde-St. Margaret's in a possible preview of Section 6 action and put the game away with seven runs in thetop of the eighth inning.

"It's crazy to think back how quick the last two years went, and now we have a veteran team that can hang with anyone," said Brettingen, a Gophers recruit who had a two-run double as part of the eighth-inning onslaught against the Red Knights. "We know other players have been around a lot, too, and that's why we can't let satisfaction get to us. When you lose your focus, that's when it all goes out the window."

Shannon is about as steady as they come on the mound. The Michigan recruit threw a three-hit shutout at Apple Valley last Thursday, using almost exclusively fastballs that approached 90 miles per hour. Shannon said he threw only two offspeed pitches before the sixth inning as the Royals built an 8-0 lead.

That likely would not have been the case a year ago. Shannon admits he had a strikeout-or-nothing mentality.

"I had no reason not to trust the defense," he said. "And now I just let [batters] hit and see what happens."

Hopkins converted double plays to end the first two innings against the Eagles, and the charge was on.

"Tim gets better as the game goes on," Lerner said. "He's able to just pound it in there."

His arm will be a key factor to a team that has visions of advancing back to state for the first time since 2009, the year before the sophomores took over. The Royals almost got there a year ago but ran into Cinderella story Bloomington Kennedy in the section finals.

"We're just worrying about us," Shannon said. "I kind of like not having scouting reports. Just come out and play."