Three sophomores often start, so the Eagles might take some lumps. But there's promise. 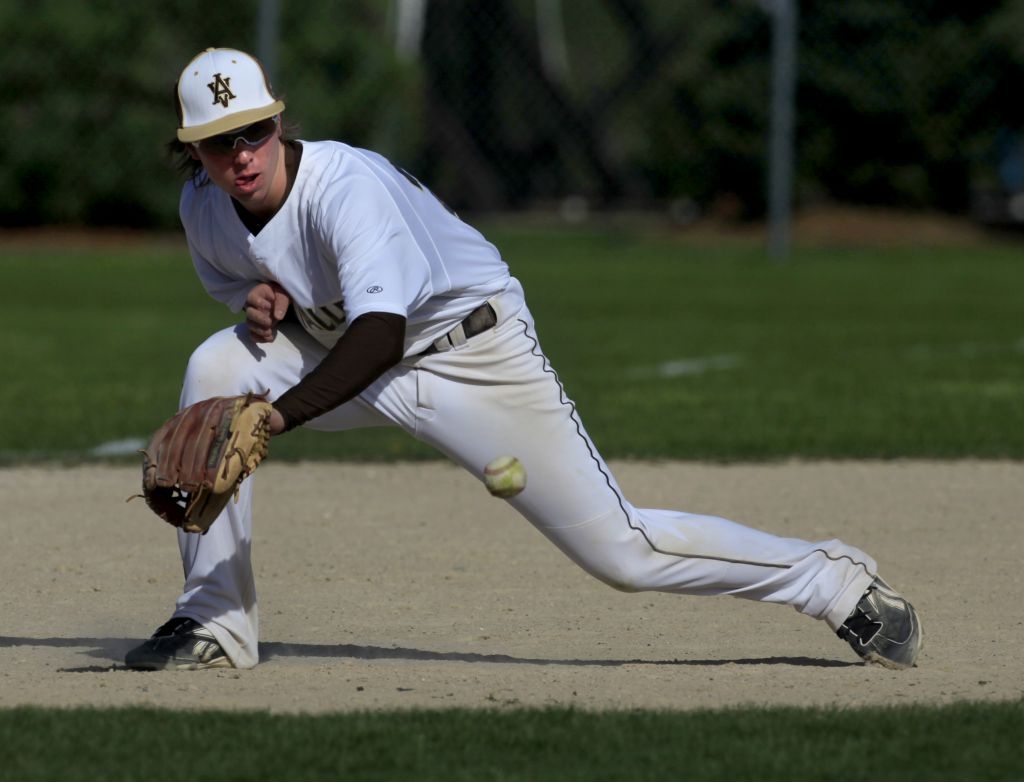 Sophomore third baseman Dougie Parks is part of a youthful Apple Valley squad that is learning on the fly. “We have to put in our time,’’ coach Jeremy Hendrickson said. Photo by JOEL KOYAMA • joel.koyama@startribune.com

After an 8-0 home loss to Hopkins last week, Apple Valley baseball players sat on the grass in foul territory and listened to a lengthy postgame address from coach Jeremy Hendrickson. They then went about their duties cleaning up the field. It was a quiet, morose bunch after the drubbing, but the young roster isn't about to let early-season struggles mean the season should be tossed into the wind like the raked infield dirt.

"We've been telling the kids we have to put in our time," Hendrickson said. "We're not going to hit a double or a home run every single time we come up to the plate. We are going to make errors. But we have to learn from those mistakes and get better individually and as a team."

The makeup of this year's team, with three sophomores starting regularly, is a stark contrast to last year's squad that won eight of its final 10 games and featured 14 seniors.

"We know we're going to see results eventually," said senior Tate Erickson, who pitched a shutout against Bloomington Jefferson a day before Hendrickson used five pitchers in the loss to the Royals. "Some of the guys, these are still their first varsity at-bats. Once they get into a groove, we'll hit our stride."

Erickson's battery mate, Logan Kohorst, is among the young talent. He started catching regularly only last season while on the junior varsity team.

"I'm still shaking him off a couple of times," Erickson chided.

At third base, fellow sophomore Dougie Parks also started on the lower squad to begin last season. But he spent the final 12 games of the season on varsity. Hendrickson called his play in the field "flawless" as a freshman and that defensive fortitude has bled into this spring.

A cool bat dropped Parks from third to fifth in the lineup recently, but Hendrickson doesn't expect him to stay there long. During an otherwise forgettable 13-3 loss to Bloomington Kennedy last weekend ("We left the ball right on a tee for them and it came back and bit us," Hendrickson lamented), Parks provided a team highlight when he laced a two-out double off the outfield wall.

"It'll come," Hendrickson said of Parks' hitting. "He's swinging hard, and he'll keep plugging away. He's a guy who will consistently be in our lineup."

The Eagles might not carry a lot of depth when it comes to senior talent, but to Erickson that's only part of the job.

"Nothing sparks us like a big out or a big hit," he said. "But we have to keep all these young guys in the game. Being a vocal leader can help get this team through some tough times.

"Every team goes through tough losses. The young guys we have are very good, and we have to show them not to get too high or too low."