Thursday's victories set up the pairings for championship day Friday at Target Field. 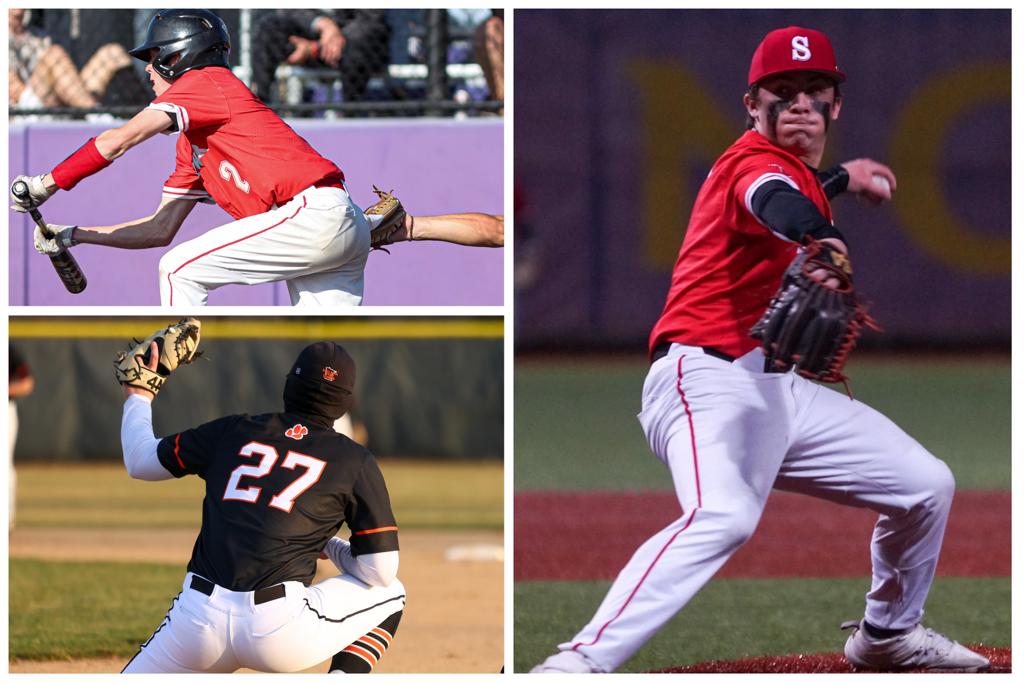 Farmington first baseman Gabe Bombardier thought about how long he’d been playing baseball with the members of his team.

“I go back to 10U,” he said following the Tigers’ 7-5 victory over Maple Grove in Thursday’s Class 4A baseball state semifinals at CHS Field. “I just love playing for this team, with kids I’ve grown up with. We started playing together in 10U. We knew we were good then. It feels good to come out here and show everyone.”

Bombardier sparked a Farmington rally with the first home run of the Class 4A tournament, onto the grassy berm above the left field wall. The Tigers trailed Maple Grove 5-0 at that point, and Bombardier’s drive got the offense rolling.

“It got everyone going,” he said. “We started getting baserunners on, moving them over, getting them in.”

On a team with 16 seniors, 10 of whom were on the 2021 state championship team, the Tigers expect a lot of themselves. Getting back to Target Field was one of their primary goals.

Interesting, then, that their biggest hit of the season came from one of their few juniors.

That is second baseman Luke Walton, who as a sophomore was not on the varsity roster in 2021 and watched the team win a state title from the stands.

Thursday, Walton came up with the bases loaded in the sixth inning. His previous at-bat had resulted in a sacrifice fly to the warning track in center. With the wind blowing strongly out to center, Walton had a feeling.

He got the fastball he was looking for, turned on it and blasted it 375 feet over the right field fence for a grand slam, putting Farmington ahead 7-5.

“I wasn’t really thinking about going yard or anything,” Walton said. “But I had the launch angle. I knew with the wind it could carry. It was crazy. Never had a bigger hit.”

“We’ve got guys with sticks,” Farmington coach Jon Graff said. “We thought if we get a good swing off, there’s a good chance one might go out. Lucky for us, two went out.”

Hellum was taking a photo of the scoreboard. “He said, ‘Guys, we’re coming back next year and it’s going to be different,’ ” Parker recalled.

Different it certainly is. Hellum pitched a four-hitter and went 2-for-4 with an RBI to help Stillwater (22-4) to a 5-3 victory over Chanhassen in the Class 4A semifinals.

“I remember thinking, ‘We just lost two Division I players and a ton of other guys,’ ” Parker continued. “We’ve only got three guys with any experience playing on varsity this year. This is just a bunch of rugrats that go hard.”

Hellum had allowed a first-inning run, spotting Chanhassen a 1-0 lead, then kept the Storm in check until the bats came around.

Stillwater’s MO is that of an offensive powerhouse. The Ponies averaged more than 10 runs per game in the section playoffs. Which makes it difficult to understand how they went 10 consecutive innings without scoring a run until they scored four in the bottom of the fifth Thursday.

“I was just trying to throw strikes and let my defense play,” Hellum said. “We got good bats. I know in every game we’ll come around eventually.”

The impetus turned out to be a sacrifice bunt by Jacob Flom with one out. Stillwater pounded four straight hits — an RBI double by Hellum followed by three singles that produced a 4-1 lead.

Chanhassen struck for two runs in the bottom of the sixth, cutting the margin to one, but Stillwater scratched out an insurance run in the top of the seventh.

Parker talked about Hellum’s gritty effort on the mound.

“He wanted the ball,” he said. “At the start of sections, we had four games and I told him he was starting the first game. He said, ‘Coach, I’ll pitch all four of them.’ He would come back and pitch tomorrow if he could. He’s just that kind of a kid.”