State quarterfinals: Maple Grove taps a fresh resource in advancing to the semifinals

The Crimson got a boost from pitcher Aiden McMahon, making his way back from injury. 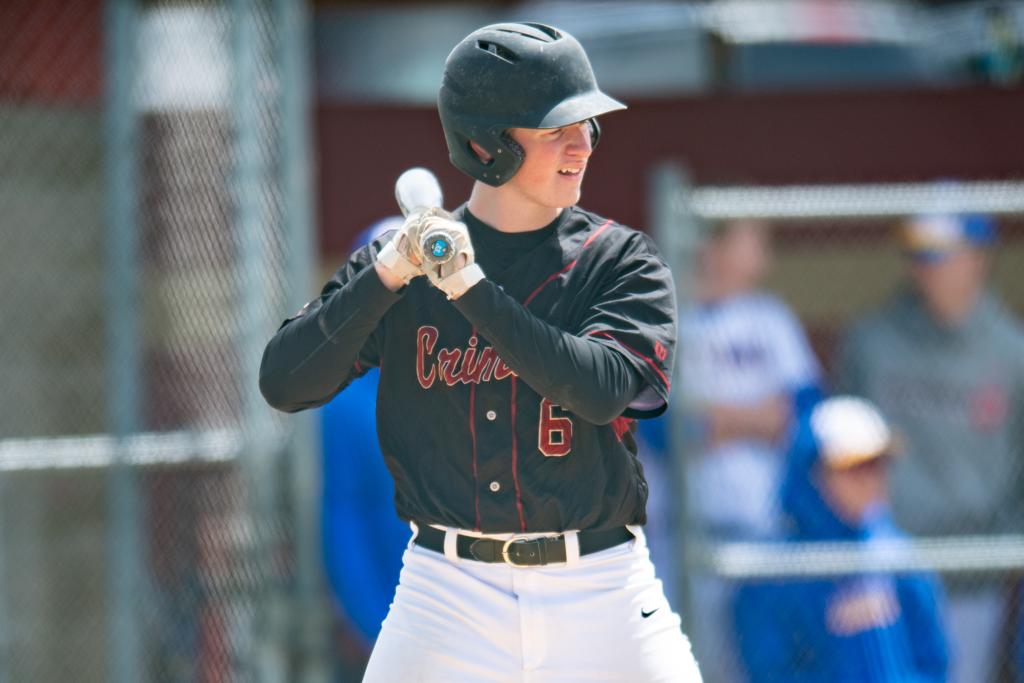 Six months ago, Maple Grove’s Aiden McMahon was certain his career as a high school athlete was over. An ACL injury in his right knee, coupled with a torn meniscus suffered in during football, was the culprit.

He missed the remainder of the football season and the entire hockey season, and he wasn’t sure he’d be healthy enough for baseball.

“I was sitting at home, thinking my career as a Maple Grove Crimson was probably over,” said the senior pitcher.

McMahon returned to the diamond about three weeks ago. Tuesday, he was the starting pitcher for Maple Grove in its 5-2 victory over St. Louis Park in the Class 4A quarterfinals of the baseball state tournament at CHS Field in St. Paul. He pitched 4 1/3 innings, allowed four hits and two runs and struck out six.

It was just his third start of the season and he threw just 79 pitches, right around his limit, but he was just the guy Maple Grove coach Jeff Peterson wanted on the mound in the tournament opener.

“He only has three starts, but he’s our captain and he’s just an absolute bulldog,” Peterson said. “I thought if I’m losing with someone on the mound, I’m losing with him.”

Peterson let McMahon know two days ago via text message that he was getting the call in the quarterfinals.

“He called me a bulldog and said he just knew I was going to get it done,” McMahon said. “I was amped. I didn’t get much sleep, but it was a good moment for me to get that start.”

McMahon gave up a run in the first to St. Louis Park (18-8), then watched as his team put up two runs in each of the second and third innings to take a 4-1 lead off Orioles starter Kristofer Hokenson, the Metro Player of the Year.

After McMahon allowed a run in the fifth, Peterson pulled him, knowing there was plenty of pitching depth in the wings.

McMahon agreed with the decision. “It was probably the right time,” he said. “Third time through the order is tough. We have so many good pitchers on this team, I wasn’t stressing about it at all.”

McMahon expressed gratitude towards his coach for believing in him.

“It showed how much confidence he had in me, to do my best and battle out there,” he said. “I really appreciate him for throwing me out there.”

Micah Runion hit a two-out, two-run single in the top of the first inning to stake Park to an early 2-0 lead.

Farmington (22-3) got one back in the bottom of the second. Matt Hinnenkamp led off with a walk and scored two batters later on a single by Drew Conrad.

The game settled into a pitchers duel until the bottom of the sixth. Drew Conrad drove in his second run of the game, knocking in pinch runner Nate Bartell with a single to tie the game at 2-2.

Conrad came around to score the game-winning run on a single by his twin brother, Mason, giving Farmington a 3-2 lead.

Dohrmann, who had been almost untouchable since his first-inning woes, set Park (18-8) down 1-2-3 in the top of the seventh, sending Farmington to Wednesday’s semifinals. Dohrmann pitched a complete game, allowing two runs, four hits and one walk while striking out seven. Park pitcher Brady Drkula was the loser but pitched well, allowing two runs and six hits with six strikeouts in 5 1/3 innings.

Stillwater 6, Sartell 5: When Sartell burst out of the gate with three runs in the top of the first inning, Stillwater pitcher Josh Wallace was less worried than most pitchers would be in that situation. If there’s one thing Stillwater is known for, it’s scoring runs.

The Ponies got those runs back immediately, and kept scoring. They struck for six runs in their half of the inning, Wallace helping himself with a bases-clearing double, and went on to a victory and a spot in the Class 4A semifinals at CHS Field.

“I know our team comes to swing the bats every game,” said the 6-foot-3, 235-pound Wallace. “I just knew I had to keep throwing strikes.”

Once his team regained the lead, Wallace admitted his mind-set changed a bit.

“I just thought, ‘Whole new game,’ ” he said. “But I definitely didn’t think they were going to hold us to six.”

Stillwater coach Mike Parker was confident in his team’s offense but said he was nervous how the Ponies would respond to falling behind early.

“We give up three and we’re hoping the guys don’t tighten up,” Parker said. “They didn’t. They had great at-bats in the first inning.”

Parker gave credit to his outfielders for maintaining the lead.

“I thought our defense in the outfield made some ridiculous plays,” Parker said. “I thought we’d score more, but we’ll take it. We’re just happy to move on.”

Chanhassen 14, Andover 0: Chanhassen pitcher Josh Och had a remarkably memorable night, once he knew the details.

Staked to a three-run lead in the top of the first inning — without a base hit — Och pitched a no-hitter as the Storm downed Andover.

Battling a cut on his thumb and occasional spates of wildness, Och walked four, hit two batters and struck out eight in his six-inning gem.

The game had lurched along in such an odd manner — neither team had a hit until Chanhassen strung five together in the fourth inning — that Och said he didn’t realize he had a no-hitter until after he walked off the mound in the fifth.

Chanhassen blew the game open with seven runs in the top of the sixth. In the bottom of the inning, Och walked one and hit another, and thoughts of losing the no-hitter crept into his head.

Och induced a final fly ball to right by Andover’s Tyler Lewnau and the no-no was yes-yes.

Mankato West 1, St. Francis 0: St. Francis had upset on its mind. It came very close to pulling it off, only to see what a difference defense can make.

Winning pitcher Louis Magers tripled with two outs in the bottom of the seventh inning and scored when senior Avery Stock reached on an error on the second baseman, giving the No. 1 seed Scarlets a victory in the Class 3A quarterfinals at Chaska Athletic Park.

The Saints (13-12) had good opportunities to score the game’s first run. They loaded the bases with one out in the first and also failed to capitalize on leadoff doubles in the sixth and seventh innings. They also left a runner in scoring position in the third inning.

Magers scattered six hits with 10 strikeouts and two walks while going the distance on the mound for the Scarlets (24-1).

Alexandria 4, St. Thomas Academy 2: Senior Jonathan Hennen held the Cadets (19-8) hitless until the fifth, and the Cardinals (20-6) built a four-run lead en route to the victory.

Hennen left after 4 2/3 innings, yielding two hits and striking out nine. Senior Park Jendro worked the final 2 1/3 innings, allowing one hit, and picked up the save.

Senior Caleb Runge went 2-for-3 with one RBI and a run scored for the Cardinals, who benefited from three St. Thomas Academy errors.

Senior Owen Omdahl threw six shutout innings and got the win. He allowed five hits while striking out six and walking none.

Grand Rapids 2, Mahtomedi 0: Senior Myles Gunderson pitched a three-hitter as the Thunderhawks (17-6) blanked the Zephyrs (18-5). Gunderson struck out nine and walked two, throwing 61 of his 88 pitches for strikes.

Mahtomedi loaded the bases with no outs in the bottom of the seventh inning, but Gunderson worked out of the jam.

Senior Ren Morque went 3-for-4 with an RBI for Thunderhawks. Teammate junior Nolan Svatos had two hits and scored both runs.

St. Agnes 8, Watertown-Mayer 4: Aiden Walsh showed he has a little pop in his bat.

The senior shortstop belted a grand slam in the top of the seventh inning, helping St. Agnes to an victory over Watertown-Mayer in the Class 2A quarterfinals Tuesday at Dick Putz Field in St. Cloud.

The Aggies (22-4) were clinging to a 3-1 lead before erupting for five runs in the seventh. It was a good thing because the Royals (20-6) countered with three runs in the bottom half of the inning.

Senior Dominic Smith had a two-run single in the Aggies’ three-run third inning. Sophomore Landen Mickelson went 2-for-3 with an RBI and run scored.

Senior Mikael Dahlstrom pitched 6 1/3 innings to pick up the win. He allowed only one earned run.

Junior Benjamin Trucke had two hits and drove in two runs for the Royals.

Fairmont 8, Sibley East 3: Senior Eli Anderson is the Cardinals’ leadoff hitter for a reason, to get on base and use his speed. He did that and more.

Anderson lined back-to-back triples, scoring after both and clearing a bases-loaded situation with the second to ignite the Cardinals offense.

Junior cleanup hitter Jack Kosbab drove in two runs with two-out, run-scoring singles in the first and third innings for the No. 1-ranked Cardinals (25-3). He finished with three RBI.

Teammate senior Zachary Jorgensen chipped in with two hits and two RBI. Fairmont wound up with seven hits, all from the top four hitters in the lineup.

Rochester Lourdes 7, Wadena-Deer Creek 3: Senior Joseph Sperry came up short in his bid for two home runs. He had to settle for a three-run double and run-producing triple.

Sperry’s four RBI, on hits off the left-center field fence, lifted the Eagles (19-4) over the Wolverines (23-5). His sixth-inning double broke a 2-2 deadlock.

He also went 5 2/3 innings on the mound and got the win. He allowed six hits while striking out 11.

Roseau 13, Duluth Marshall 2: Senior Isaac Wensloff took care of business on the mound and at the plate. He threw a four-hitter while striking out 14 and added two hits, scored two runs and drove in four as the Rams (18-6) beat the Hilltoppers (17-6).

Hayfield 5, New Ulm Cathedral 4: Hayfield knows who to turn to with the game on the line: Gophers recruit Easton Fritcher.

The senior lefthander came on in relief in the seventh inning and worked out of a bases-loaded jam with a two-out strikeout, squelching New Ulm Cathedral’s rally in the Class 1A quarterfinals at Joe Faber Field in St. Cloud.

Hayfield (23-2) entered the seventh leading 5-1, but New Ulm Cathedral (22-4) closed the gap to one thanks to three walks, a hit batter and an error, all after two were out.

Fritcher ripped a two-run triple in the second in his only official plate appearance. He walked twice and was hit by a pitch. The Vikings built a 5-0 lead in the first three innings.

Randolph 10, MACCRAY 0: The Rockets (23-1) scored eight first-inning runs in routing the Wolverines (15-7). Three pitchers combined to throw a three-hit shutout in the game, which was shortened to five innings because of the 10-run rule.

Senior Andrew Jenkins was one of three players with two hits for Randolph. He also scored two runs and drove in one.

New York Mills 10, Bertha-Hewitt/Verndale 1: Senior Jonah Johnson likes to have the bat in his hands with runners in scoring position.