The Crimson overcame a 5-0 deficit and scored twice in the bottom of the seventh to defeat the Mustangs. 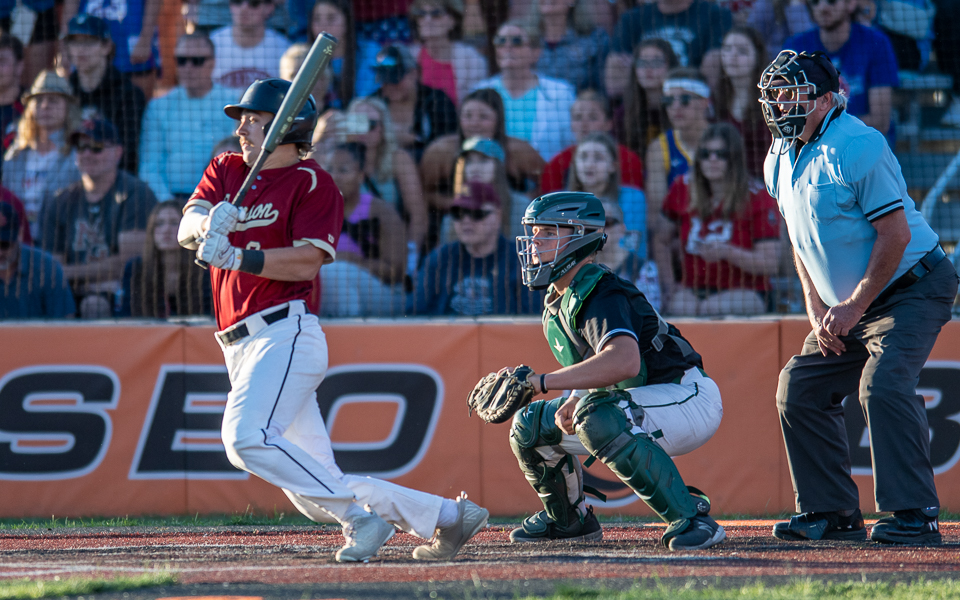 Mason South of Maple Grove hits an infield ground ball that brought in the game-winning RBI in the bottom of the seventh inning of the Class 4A, Section 5 championship game Wednesday night. Photo by Earl J. Ebensteiner, SportsEngine

After a nine-inning thriller in their first meeting in the Class 4A, Section 5 tournament, Maple Grove and Mounds View met in the section final. And once again, drama ensued.

The Crimson fell behind 5-0 after the second inning and again 6-5 in the seventh. But those deficits did not deter Maple Grove as the Crimson came back twice, including a dramatic bottom of the seventh to win 7-6 and take home the section championship and advance to next week’s Class 4A state tournament.

After the Mustangs (16-9) lost the first meeting against Maple Grove, they came back with vengeance and took down Champlin Park to set up a rematch with the Crimson. Mounds View needed two wins on Wednesday to win the section championship. 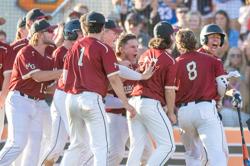 The Mustangs came out looking like a team desperate to win and keep their season alive. Mounds View scored four runs in the top of the first inning. Junior shortstop Jack Henrich knocked in the game’s first run. Then, junior third baseman Tanner Hoemann delivered with the bases loaded as he cleared the bases with an RBI double.

In the second inning, the lead grew when Mustang sophomore catcher Drew Rogers hit a blast well beyond the left field fence to make it a 5-0 game.

“We’ve struggled getting off to strong starts all season,” Mounds View coach Nik Anderson said. “We had some guys step up. Our guys came out firing with their backs against the wall.”

With that sort of lead, the attention for Mounds View turned to its starter, Blake Guerin. The University of Iowa commit came out firing and pitched all seven innings for the Mustangs.

“(Guerin) has been as lights out as they come,” Anderson said. “He was our ace all year. He gave us a chance to compete. We were pinned right up to 112 pitches with him. There was no way we were taking the ball out of his hands.”

Though Guerin had shown some dominance on the mound, Maple Grove started its comeback efforts in the second inning when Crimson senior catcher Chayton Fischer homered to get Maple Grove on the board.

“(Guerin) kind of blew us away in that first inning,” Peterson said. “I just told the guys to be confident in their swing and good things will happen.”

As the Crimson slowly chipped away at the Mounds View lead, Maple Grove junior pitcher Michael Ross held the game down on the mound. Despite not pitching in about a month due to an arm injury, Ross provided some much-needed stability after Crimson starting pitcher Ethan Zimmerman struggled through two-plus innings of work.

“I’m always ready and love these big moments,” Ross said. “I knew I had to keep it close and give us a chance to win the game with the sticks.”

While Ross did not allow a run until the seventh, Maple Grove’s middle of the order got the Crimson back into the game and tied at five entering the seventh inning. The 4-5-6 Maple Grove hitters (junior first baseman Hunter Gerber, Fischer and South) combined for three doubles, six runs scored, three RBIs and two home runs.

“(Guerin) was throwing heat but leaving some fastballs up,” South said. “I knew our guys could hit that fastball. Our whole lineup did.”

Heading into the seventh, Mounds View responded when junior left fielder Parker Holmboe scored on Hoemann’s second RBI double of the day to make it 6-5.

In the bottom of the inning, Maple Grove got a rally going right away when junior center fielder Jacob Kilzer led off the inning with a double.

“I had a feeling (Kilzer) was going to do something,” Peterson said. “As the quarterback of our football team, too, he’s a competitor. He came out today knowing he was going to get it going.”

Kilzer advanced to third and stood there with two outs and Mounds View one out away from forcing a winner-take-all game two. Then, Gerber reached and Kilzer scored as Henrich fumbled a grounder and Maple Grove tied the game.

Fischer came up next and was hit on the foot by a pitch. Then, South came to the plate. Down 0-2 in the count, the senior made his softest contact of the day in a grounder to Heinrich. But it turned out to be the most important. Heinrich sailed the throw to second and Gerber came around to score, sending Maple Grove back to state.

“The adrenaline was really high,” South said. “We got a little lucky. But that’s baseball. You gotta get a little bit lucky.”

As the Maple Grove students stormed the field, the celebration was on for the Crimson. But on Mounds View’s side, a look of heartbreak took over the Mustangs as they fell once again to Maple Grove in dramatic fashion.

“We couldn’t be more proud of this group,” Anderson said. “Baseball’s a tough sport, and that’s why it hurts bad. It’s the end of a season for a really good group.”

Meanwhile, the celebration is on for the Crimson as they head to the first state tournament since 2017.

“It was down to the wire again,” Peterson said. “I knew if we could keep it close that we had a chance. We just kept piling and the momentum switched. 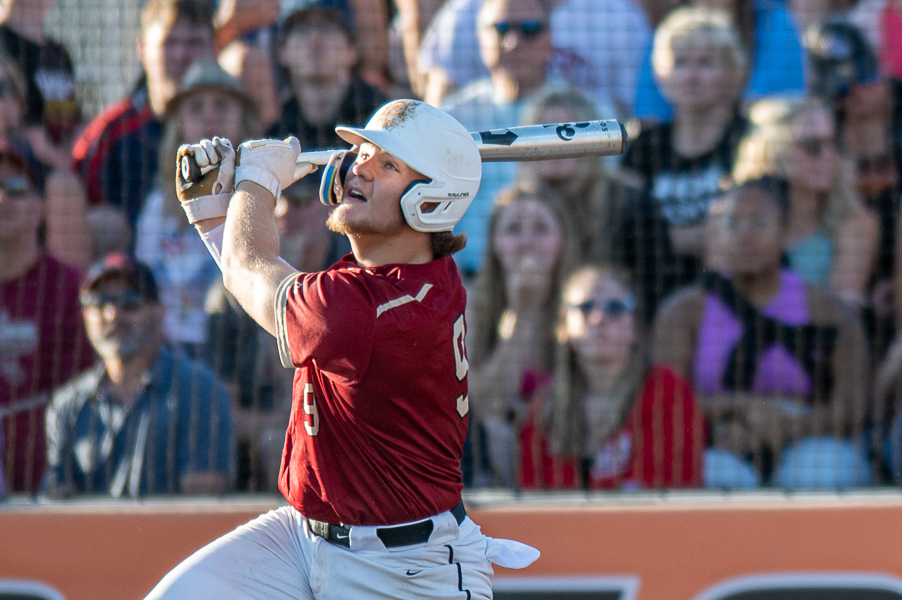 Senior catcher Clayton Fisher went 2-for-4 with a solo home run and two RBIs in the 7-6 win over Mounds View in the Class 4A, Section 5 championship. Photo by Earl J. Ebensteiner, SportsEngine

After trailing by as many as five runs, Maple Grove came back to tie the game at five before erasing a one-run deficit in the seventh and winning 7-6 to capture the Class 4A, Section 5 title on Wednesday at Osseo High School.

Mounds View (16-9) came in needing to win twice to head to the state tournament. The Mustangs started well, scored five runs in the first two innings. Junior third baseman Tanner Hoemann cleared the bases in the first inning with a 3-run RBI double. He finished the day 3-for-4 with two RBIs.

Maple Grove (19-4) had its comeback effort start with a solo home run from senior catcher Chayton Fischer. He went 2-for-4 in the win with a home run, two RBIs and two runs scored.

In the sixth inning, the Crimson tied the game at five with a solo home run from senior designated hitter Mason South. He scored twice in the game.

In the top of the seventh inning, Hoemann made it 6-5 Mustangs lead with an RBI double that drove in left fielder Parker Holmboe.

In the bottom of the seventh, junior center fielder Jacob Kilzer started the rally with a double. After advancing to third, Kilzer scored as Hunter Gerber reached on an error by junior shortstop Jack Henrich. After Fischer was hit by a pitch, South hit a grounder to Henrich. The shortstop’s throw to second base was wide into right field and Gerber came around to score to give Maple Grove the win and section championship. 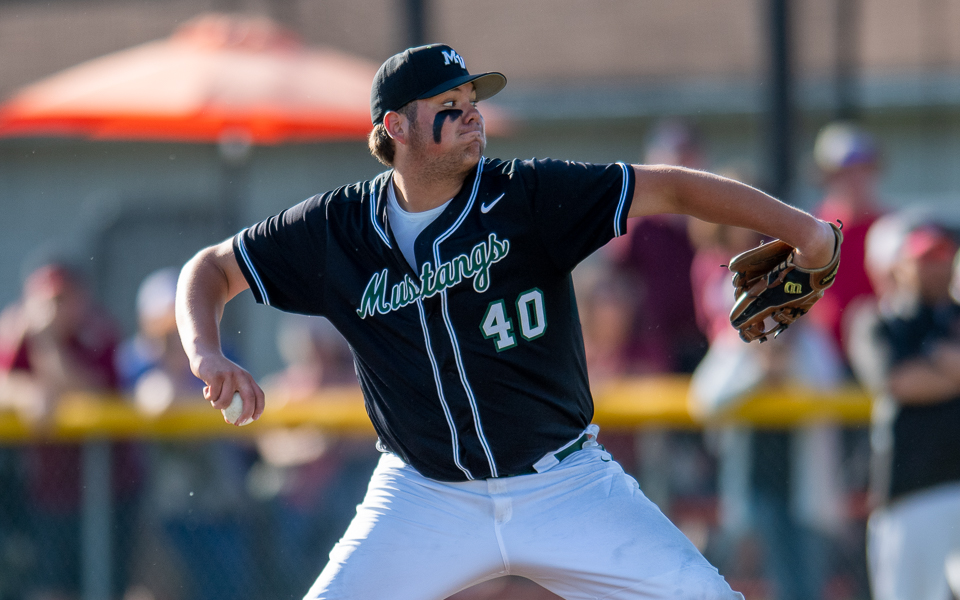 Mustangs senior pitcher Blake Guerin pitched the entire game in the 7-6 loss to the Crimson at Memorial Field in Osseo. Photo by Earl J. Ebensteiner, SportsEngine