The Royals tallied six unanswered runs to turn the tide against the Eagles. 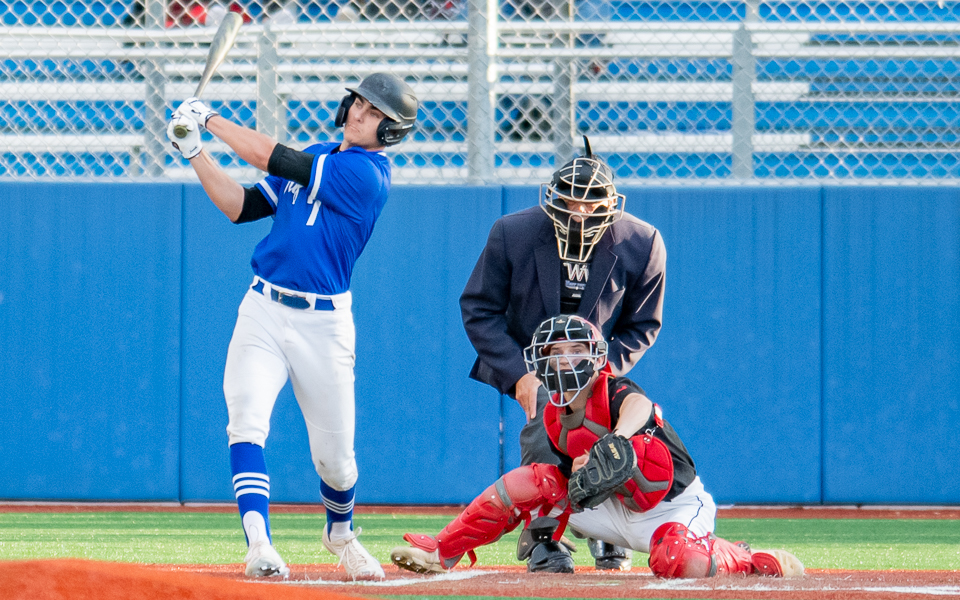 Maddox Mihalakis hits a grand slam home run in the fifth inning giving the Royals a 4-2 lead. The Royals held on to the lead and defeated the conference-foe Eagles 6-2 Wednesday night at home. Photo by Earl J. Ebensteiner, SportsEngine

After the lightest of possible drizzles came down for a few minutes in the top of the fifth inning at Hopkins High School on Wednesday night, a rainbow appeared over the scoreboard in right field as the bottom of the fifth was about to begin.

Call it a good omen or just call it a coincidence, but that was when Hopkins put up five runs and took total control of what turned into a 6-2 win over Eden Prairie. 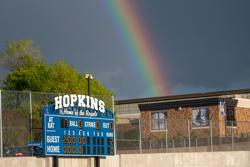 The Royals (14-3, 10-1) got the first three batters of the inning on base for Maddox Mihalakis. He hit the first pitch he saw into the Lindbergh Center parking lot well past the right field fence. “When guys before me got on and the bases were loaded I was just looking for the first pitch,” Maddox Mihalakis said. “We needed a momentum switch in the game since we were kind of down, so I was looking for that first pitch that I could drive in a gap to get some runs.”

Maddox Mihalakis finished the game 2-3 with four RBIs and a run scored. He could’ve done more damage in the bottom of the sixth, but he was intentionally walked with first base open, something he said he takes as a compliment.

Maddox Mihalakis wasn’t the only Royal looking to swing at the first pitch. That became common for the Hopkins hitters as the game went along and they got more looks at Eden Prairie starter Jackson Hunter. Hunter was able to frustrate them early with five strikeouts through four scoreless innings. Jason Mihalakis said the aggressive approach at the plate is something he encourages.

“We don’t bunt much, we green light our guys on 3-0,” he said. “We want them to swing and we want them to be aggressive and we know we’re one of the better hitting teams in the state, so that’s what we try to do. We don’t want them tentative.”

That aggressive approach has produced 69 runs over the current nine-game winning streak the Royals are on, good enough for 7.67 runs per game.

While the Royals’ bats struggled early, the Eagles’ (11-4, 7-3) bats were hot at the start. Jake Luloff and Joey Flom got hits at the first two at bats of the game. After Luloff scored off a fielder’s choice from Ryan Koering, Koering scored off a hit from Joe Burns. Nick Thompson picked up a single in the second inning, but the Hopkins bullpen shut down the Eagles from there. In five shutout innings, Olin Lysne and Jaden Reifsteck combined for seven strikeouts and only allowed one hit.

“(He) came out and right out of the gate was going at hitters,” Jason Mihalakis said of the sophomore Lysne. “He’s going to be a really good pitcher for us down the stretch and next year and beyond.” 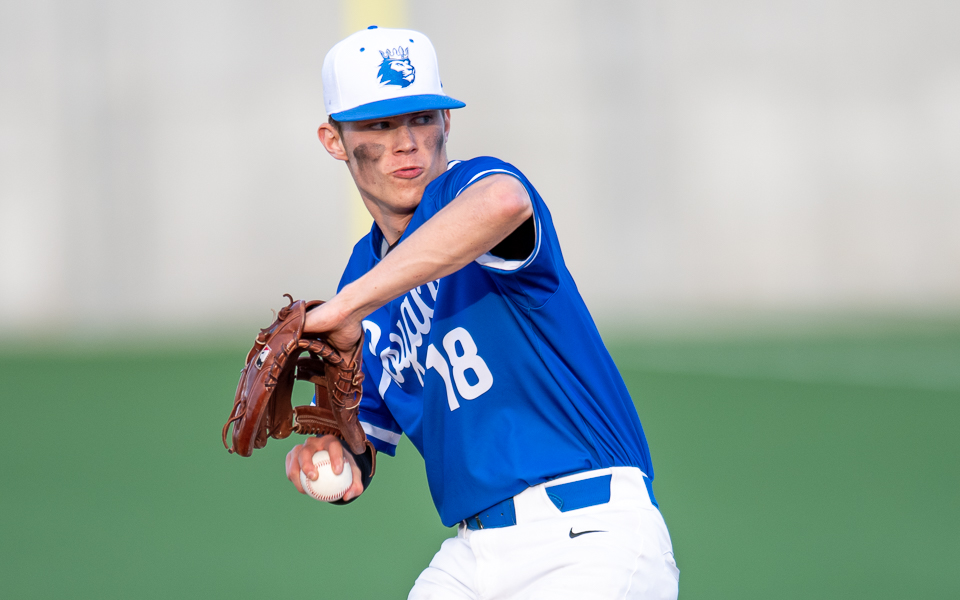 The Royals’ Olin Lysne took to the pitching mound in the third inning retiring the first nine hitters he faced as the the royal’s go on to beat the Eagles 6-2. Photo by Earl J. Ebensteiner, SportsEngine

The Eagles (11-4, 7-3) put pressure on Hopkins starter Gabe Olson right away. The first two hitters of the game, Jake Luloff and Joey Flom, each got base hits. Luloff scored on a fielder’s choice off the bat of Ryan Koering. Koering then came around to score off a single up the middle from Joe Burns to make it 2-0 in the first.

Olin Lysne replaced Olson after two innings and frustrated the Eden Prairie bats. He retired the first nine hitters he faced. He finished with three strikeouts and a walk in three-plus innings pitched.

Jackson Hunter was able to work out of multiple jams to record four shutout innings for the Eagles. The fifth was a different story. A hit, a walk and an error loaded the bases for Maddox Mihalakis. He crushed the first pitch well over the right field fence to give the Royals (14-3, 10-1) a 4-2 lead.

Hunter finished with five strikeouts, six hits, a walk and four runs in four-plus innings pitched. The Royals added two more runs from pinch runners, as Brady Anderson and Sam Levitt both scored after coming off the bench.

Jaden Reifsteck picked up four strikeouts in a two-inning save to close out the game. 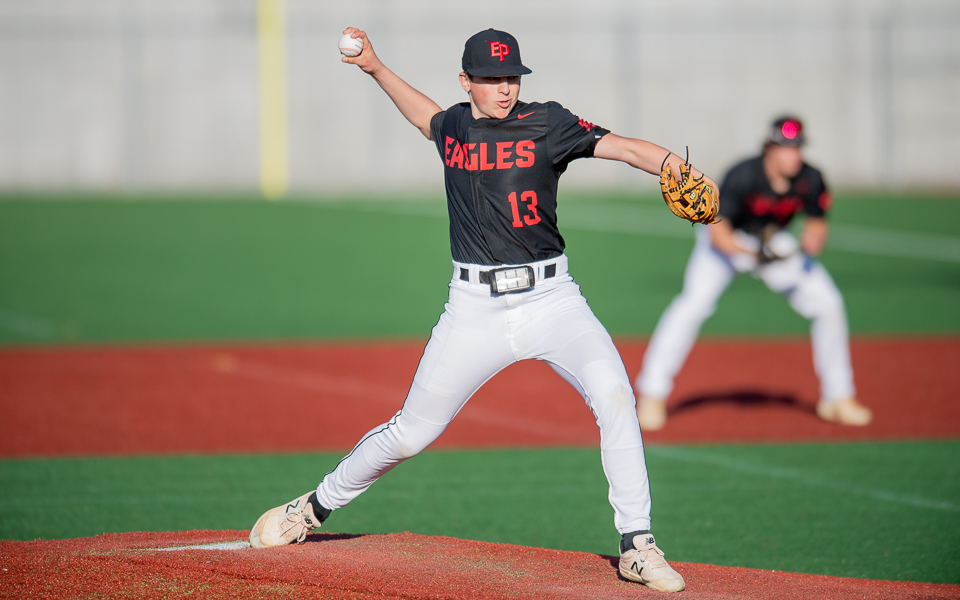