The Bengals fought from a deficit to bat around in their last at-bat and top the Orioles 6-4. 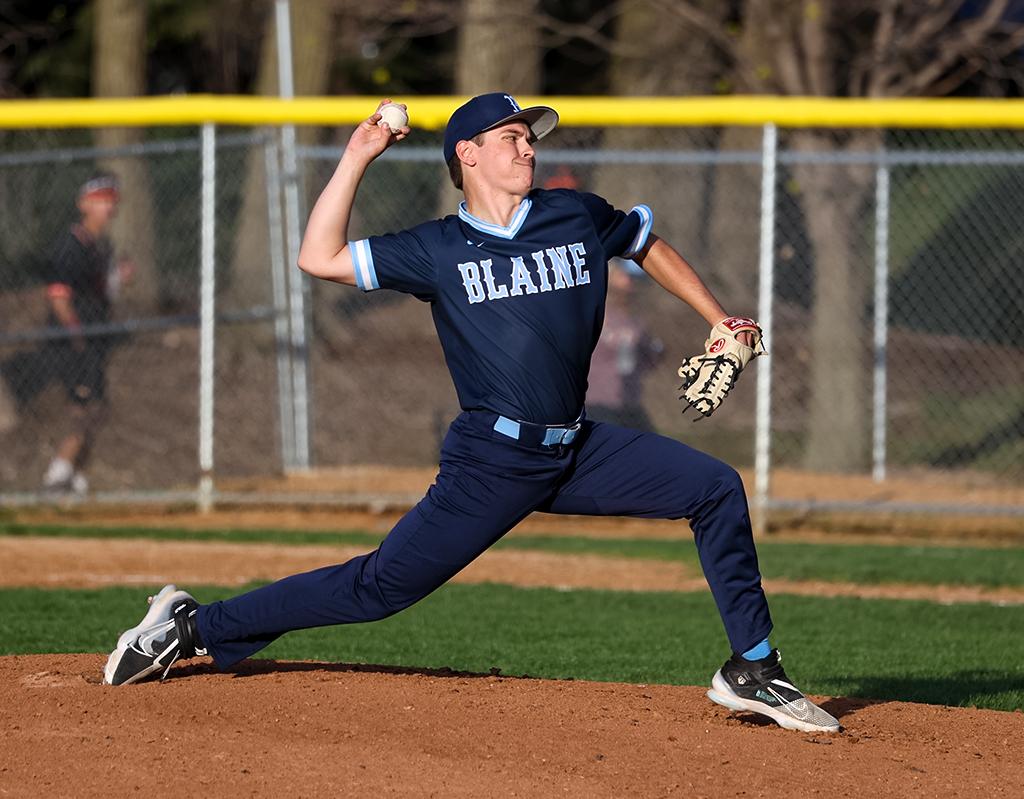 Blaine's Eric Charest pitched a complete game and improved his record to 4-0 this season with a 6-4 win over Northwest Suburban Conference foe Osseo on Tuesday night. Photo by Cheryl A. Myers, SportsEngine

In Blaine, they have a word for it.

That team feeling when you figure things out, and you trust collectively you will find a way to turn or secure your fortunes in a positive light.

Down by three at home to Osseo Tuesday night, the Bengals rallied through their order with a sixth-inning fury to blitz the Orioles and wrap up a 6-4 home victory.

The “Juice” was uncorked for Blaine.

“One hit leads to another, and the energy changes,” second baseman and clean-up hitter Ethan Pettis said. “We like to call it ‘juice’ and our team’s juice is always strong. We love to get fired up, and we like to keep it rolling.” 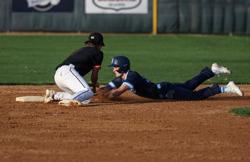 Pettis tagged an RBI single to left center in the juiced-up sixth, right between Damon Thomeke’s RBI single, and the third-straight RBI at-bat when Jackson Koenig drove in a pair just afterward. Koenig would be the fifth and last to score in the definitive inning.

On the hill, right-hander Eric Charest closed out the seventh inning confidently in order, capping off a complete-game victory that moved him to 4-0 on the season. Charest allowed six hits, three earned runs, a walk and struck out three, but never felt as good all game until the seventh. He could feel the change too.

“It helps with the juice from the dugout,” Charest said. “We all feed off it.”

Blaine coach Ted Erickson praises Charest’s perseverance and calls him a warrior. But as much as his curveball catches the eye, it’s the junior's changeup that has become the most effective.

“His changeup, batters just don’t see it,” Erickson said of Charest. “His curveball is his best pitch, but they can’t hit his change-up. That’s what was working tonight.”

Blaine, rated No. 9 in the April 22 Class 4A rankings, got on the board first when leadoff man Adam Puder turned a lead-off walk into the game’s first run on a wild pitch. Osseo (8-7) answered, then took the lead in the top of the sixth inning when they strung together three runs on three hits.

In the bottom half Blaine took over.

“It felt like the whole time, we were hitting the ball right at people,” Pettis said. “Coach challenged us to battle more in the (at-bats), and we got after it.”

Pettis kept it going from the previous night’s win over Rochester Century, where the sophomore went three-for-four with four RBI. He now has a team-leading 10 RBI for the season, as well as a .486 slugging and the team’s only homerun. He also leads the team in total bases (18).

“Ethan Pettis has been on fire for us, '' Erickson said. “He’s swinging the bat well and he keeps coming up big for us.”

Blaine remains in first place in the Northwest Suburban standings continuing its unblemished mark at 8-0 in the conference, and where they’ve found a way to come out on top of a one or two-run game in six of those times.

That’s the mark of a team that’s developing the right way. Erickson hopes so, anyway.

“This group has a ton of grit and a ton of tenacity,” he said. “It’s a group that believes, and will continue to fight to the last out.” 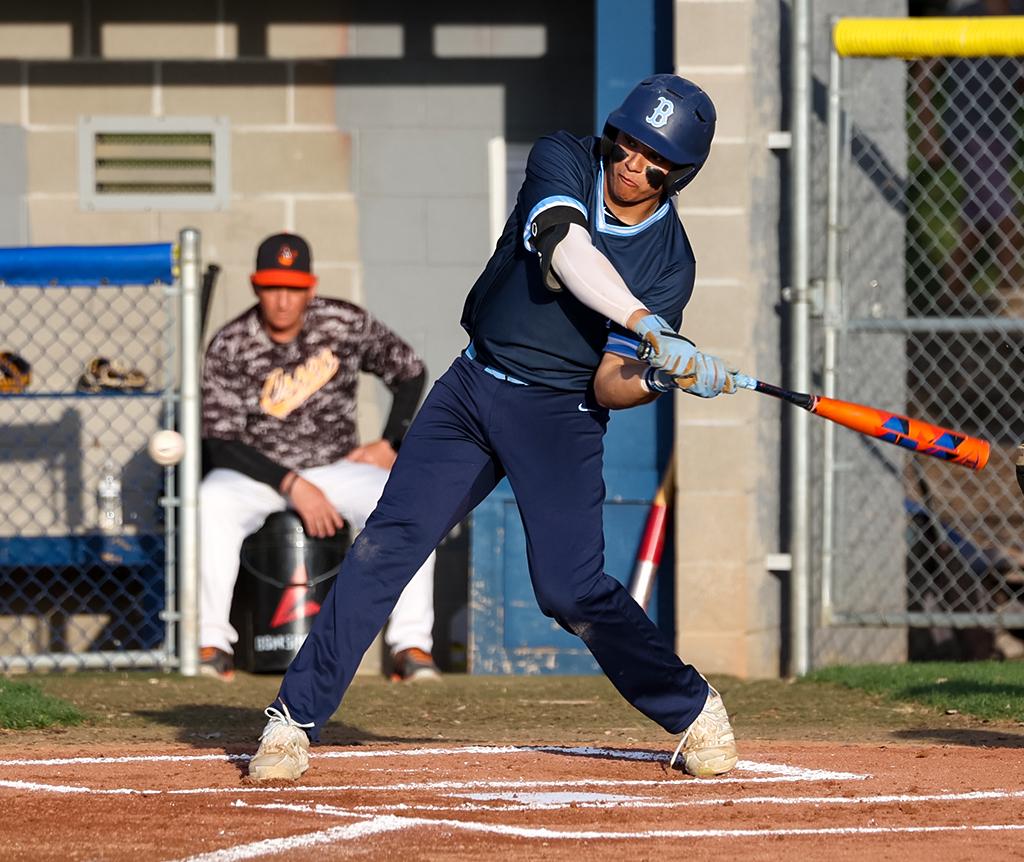 Damon Thoemke connects with the ball in the first inning. Thoemke and team mates Ethan Pettis and Jackson Koenig each tallied an RBI single in the bottom of the sixth inning, leading Blaine to a 6-4 win. Photo by Cheryl A. Myers, SportsEngine

Blaine scored five runs in the bottom of the sixth inning and turned a three-run deficit into a two-run cushion before right-hander Eric Charest slammed the door in the seventh to secure a 6-4 home victory over Osseo Tuesday night.

Blaine, rated No. 9 in the April 22 Class 4A rankings, got on the board first when leadoff man Adam Puder turned a lead-off walk into the game’s first run on a wild pitch. Osseo (8-7) answered, then took the lead in the top of the sixth inning when they strung together three runs on three hits.

In the bottom half, Blaine (10-4) batted around and got clutch hitting from the meat of the order when Damon Thoemke, Ethan Pettis and Jackson Koenig all put tougher RBI singles in succession to tear the game open.

Charest went the distance and allowed three earned runs on six hits, one walk, and struck out three to improve his season record to 4-0. 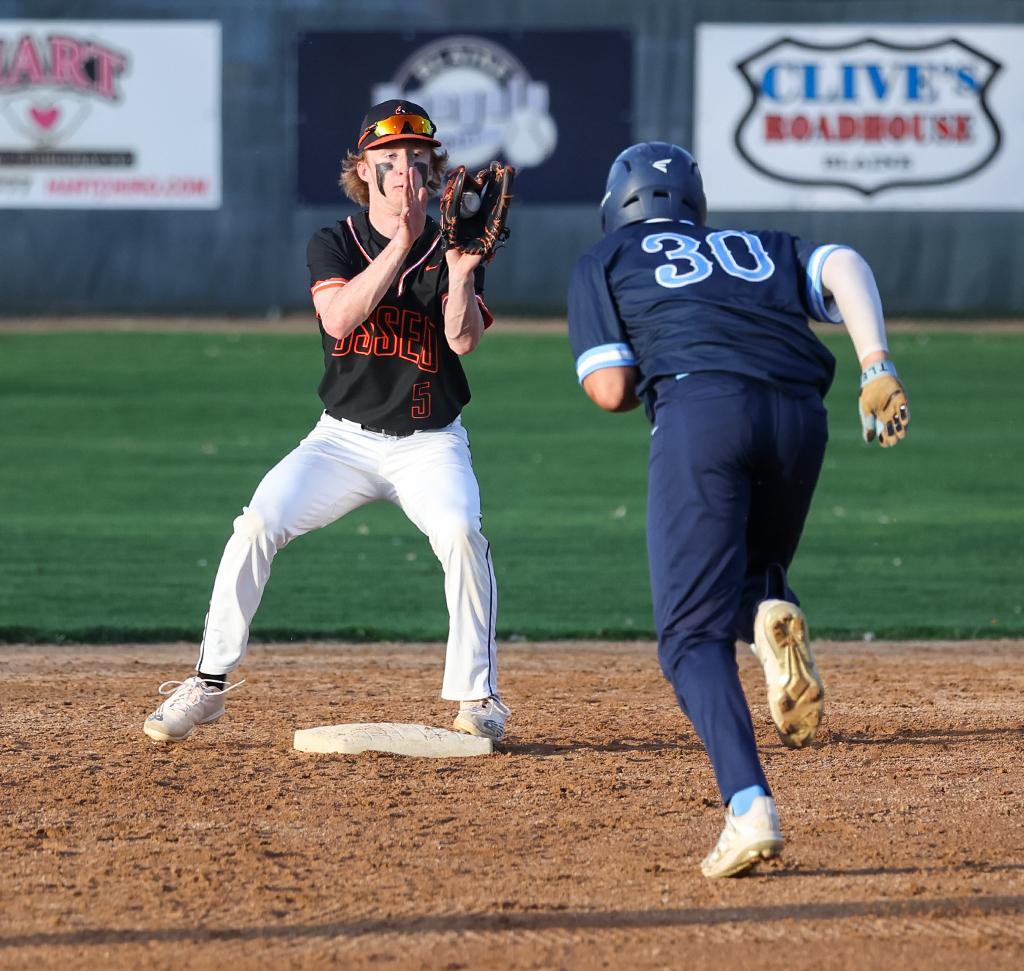 The Orioles complete the double play at second base in the bottom of the fourth inning to hang on to a 1-1 tie. Photo by Cheryl A. Myers, SportsEngine

MN Baseball Hub polls are for entertainment only.