Farmington takes down Prior Lake

Two three-run innings propelled the Tigers to the victory over the Lakers. 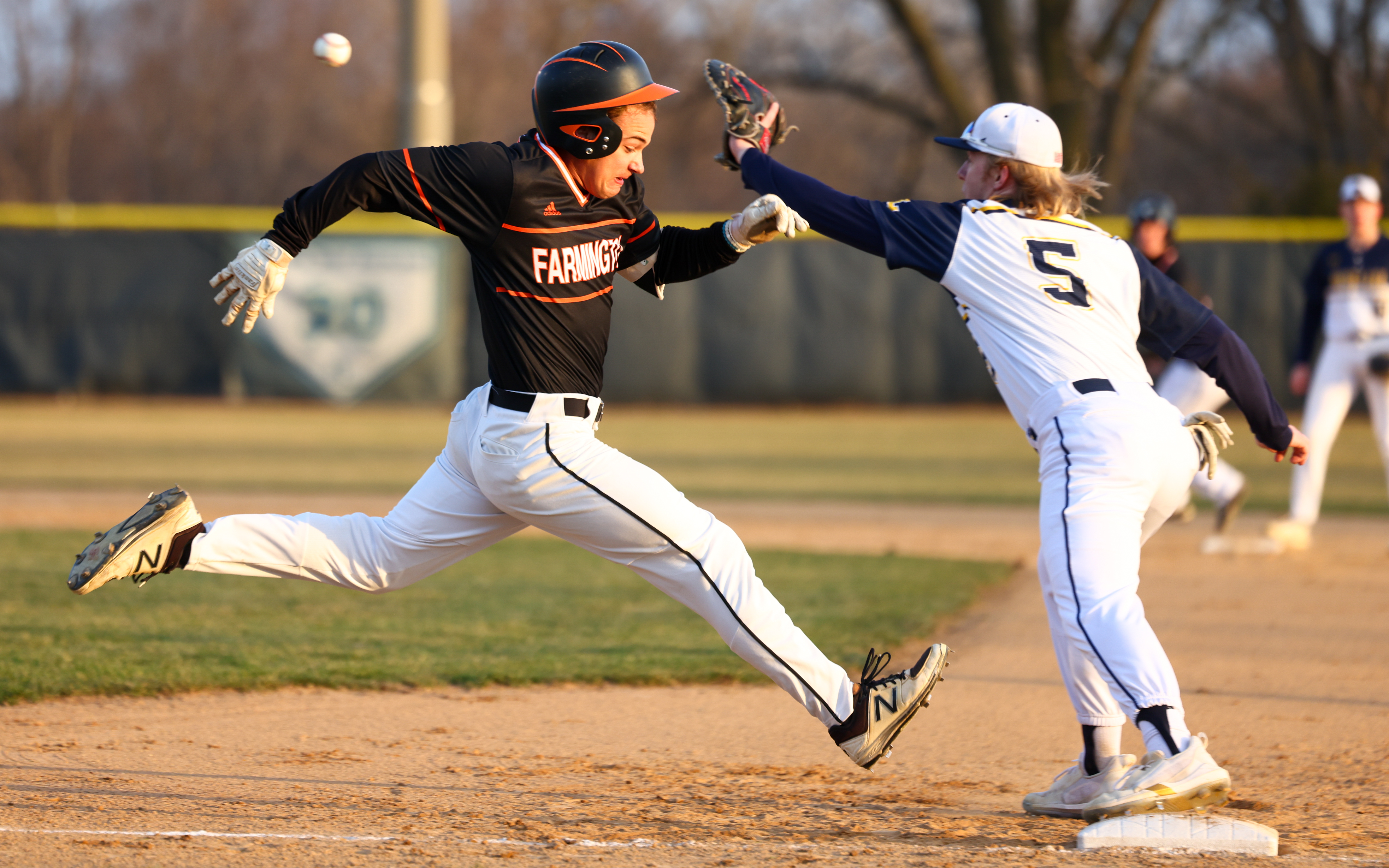 Farmington's Drew Conrad beats out a throw to first base in the top of the third inning against Prior Lake Wednesday evening. The Tigers defeated the Lakers 7-1 at Memorial Park in Prior Lake. Photo by Jeff Lawler, SportsEngine

Farmington coach Jon Graff can only play nine players at a time. Ten if he utilizes a designated hitter.

Those are the same rules all baseball skippers must abide by, of course. The thing is, they don’t face the same happy dilemma Graff does.

The Tigers are coming off the school’s first state championship in any sport when they outlasted Park of Cottage Grove in last spring's title game. They return a bevy of production from that squad, which features a dozen players planning to play college ball next season.

Actually, make that a baker’s dozen.

“We just added the 13th (college commit) not too long ago,” Graff said. “Thirteen of 16 seniors and there might even be a 14th still. We’re not sure, he’s still looking.”

While Farmington got out of the gates with two losses in its first four games, it’s tidied up some sloppy defense and found its stride at the plate to win two in a row, including a 7-1 victory over Prior Lake on Wednesday. 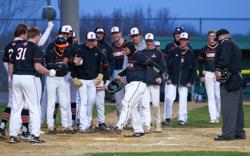 Photo gallery: Farmington vs. Prior Lake

On Wednesday at Prior Lake, it was Matt Hinnenkamp’s and Hunter Frost’s turn to lead the senior-laden squad. In the win, Hinnekamp went 3-for-4 with a towering three-run home run to break the game open in the fifth inning. The catcher was a triple shy of the cycle. Frost went five innings and held the Lakers to three hits in a winning effort.

“Everything was there. We had 12 hits and only one error,” Frost said. “That’s been our main issue, our hitting and defense. Our pitching could be better, but everything was good tonight.”

Frost was critical of his four bases on balls, but he was otherwise solid.

Prior Lake drew first blood on a cold, breezy night at Memorial Park. Brady Baur’s RBI single put the home team up 1-0 after two innings. Michael Gabbard also went 3-for-3 with a walk.

Connor Weed put the Tigers up in the third inning when a towering two-out, two-run triple to the right field warning track fell innocently past the right fielder’s glove on a playable ball. Gabe Bobardier added a RBI single in the frame.

It was all the damage Prior Lake starter Ryan Wattermann allowed in four innings. The Lakers entered with a two-game win streak.

“We lost our first game, that one hurt, but we learned from it and came back and won two games by playing super well,” Wattermann, who drew three walks at the plate, said. “We hope to do the same after this one.”

Hinnenkamp touched up Prior Lake reliever Ben Anderson for the home run.

“I got behind 0-2 and was hunting curveball or off speed,” Hinnekamp described. “I got a fastball, got the barrel head up and turned on it.”

That was one of few mistakes for Anderson, who lasted two innings. The senior has battled through a lot to be a part of the Lakers’ pitching staff.

“He’s a great story,” Prior Like coach Al Iverson said. “Came out for freshman ball, got injured. Got covid. Had an arm injury last year and now making the varsity team and being a good influence for all of us to follow.”

Farmington opened the season with a 7-4 loss to South Suburban Conference rival, Eastview. The Lightning are 4-0 entering Thursday’s rematch in Apple Valley.

“We had 10-12 errors in those two losses,” Graff said, alluding to a one-run loss to Lakeville North as well as against Eastview. “Tonight’s defense was great and is more of what we’ve come to expect. The more we get outside, the more it’s going to make us better.”

The Tigers are filled with veteran savvy.

“We’ve got a lot of experience with guys from the past season,” Hinnenkamp said. “We’re going to use that leadership to come.” 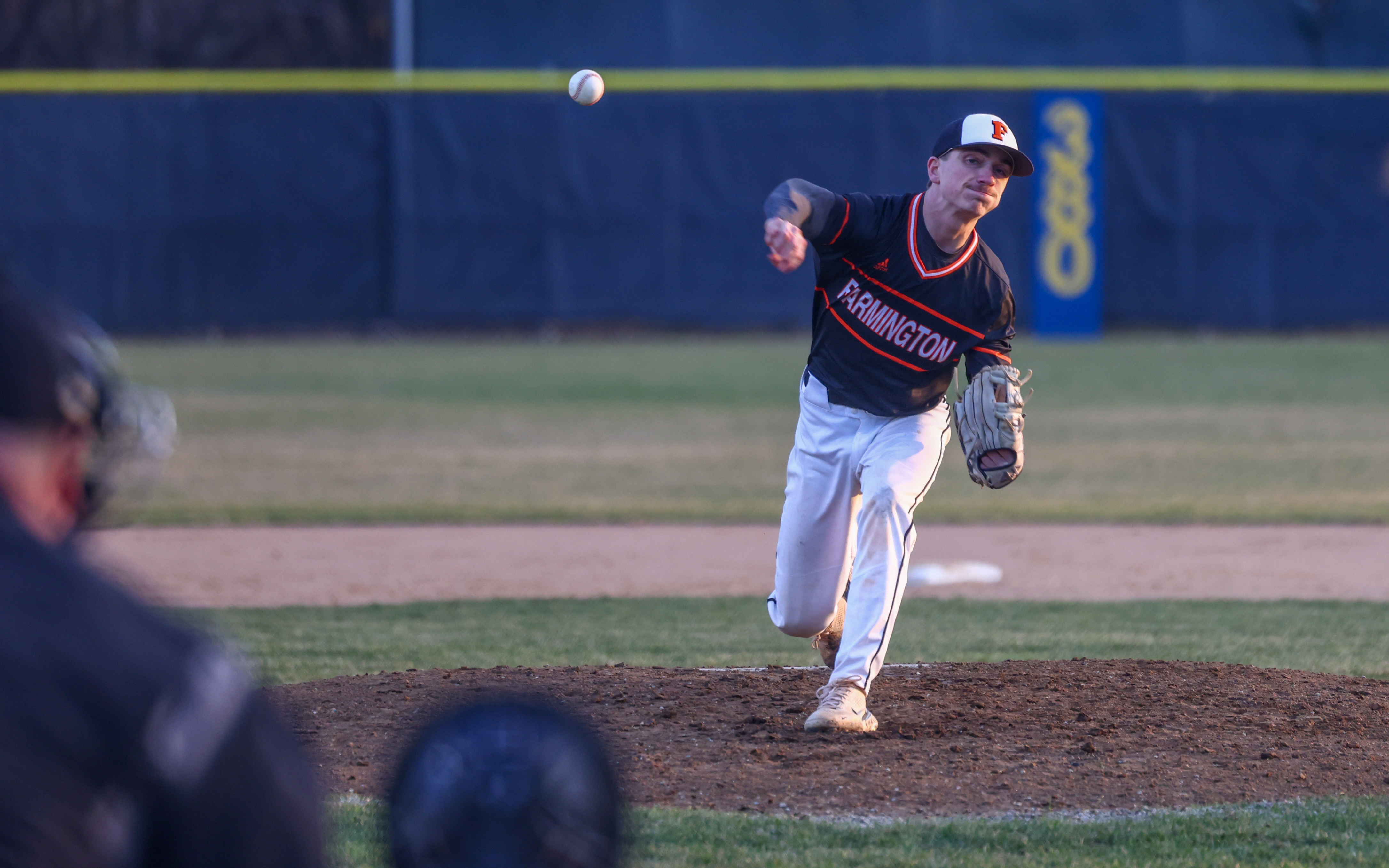 Farmington pitcher Hunter Frost allowed one run on three hits over five innings against Prior Lake Wednesday evening. Frost also struck out four batters in the Tigers’ 7-1 victory over the Lakers. Photo by Jeff Lawler, SportsEngine

Defending Class 4A state champion Farmington is back to its winning ways.

Insurance came in the fifth inning when Matt Hinnenkamp’s home run plated three with two outs on an 0-2 count. He led at the plate going 3-for-4 with four runs batted in and was a triple shy of the cycle.

The Lakers were led by Brady Baur who reached base twice and gave them a 1-0 lead on a RBI single in the second inning. Michael Gabbard went 3-for-3 and walked.

Hunter Frost earned the win on the mound. In five innings he allowed one earned run with four strikeouts and four walks on three hits.

Ryan Wattermann took the loss. He allowed three runs, all earned, on four hits to go with seven strikeouts and two walks in four innings. 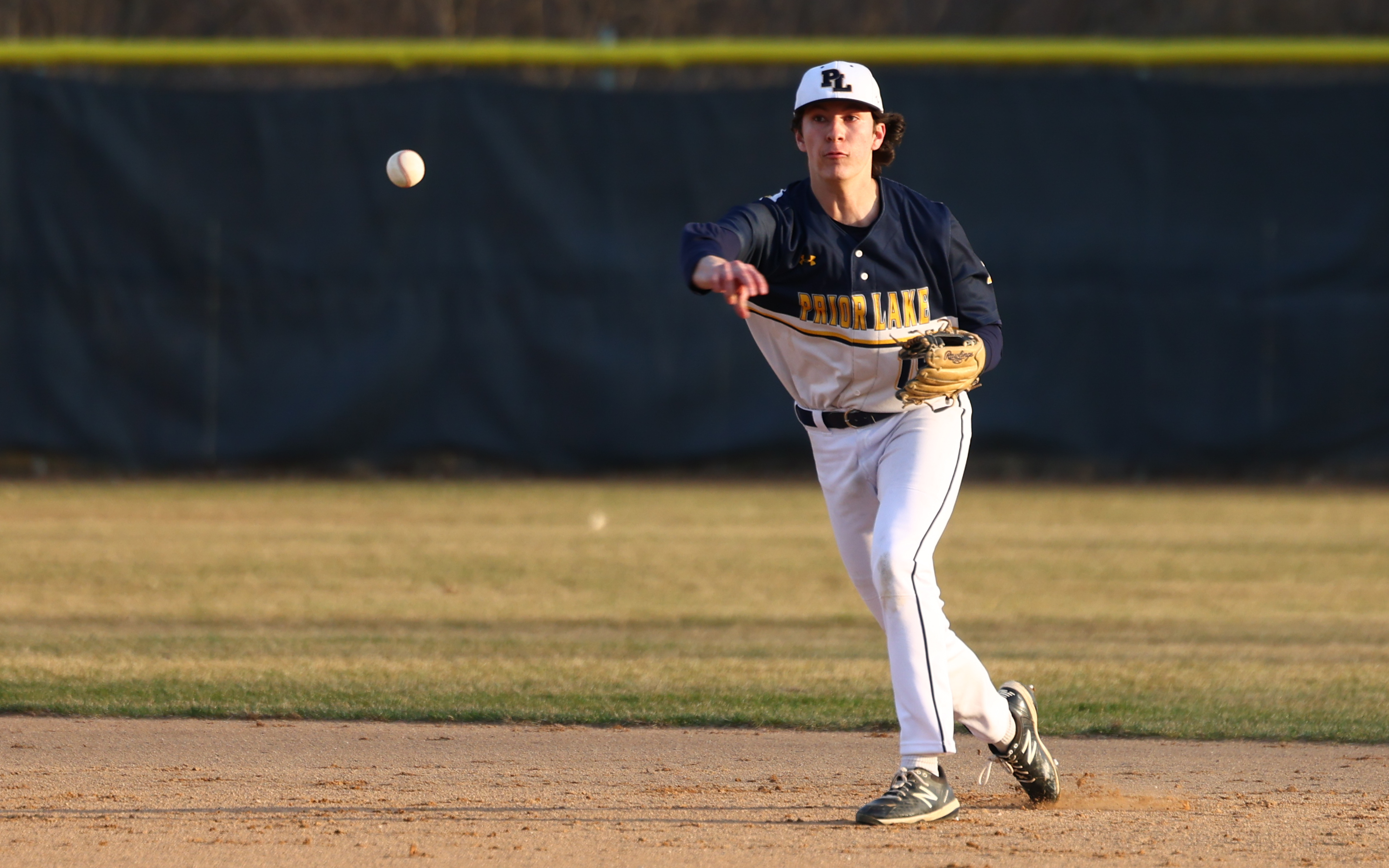 Prior Lake's Cole Clausen throws to first base for an early inning out against Farmington Wednesday evening. The Lakers fell to the Tigers 7-1 at Memorial Park in Prior Lake. Photo by Jeff Lawler, SportsEngine

The MN Baseball Hub poll is for entertainment purposes only.