From hardwood to hardball, Hayfield adds another state title

With a starting lineup stocked with its basketball championship team, the Vikings baseball team rallied for a 7-4 victory over New York Mills to win the Class 1A championship. 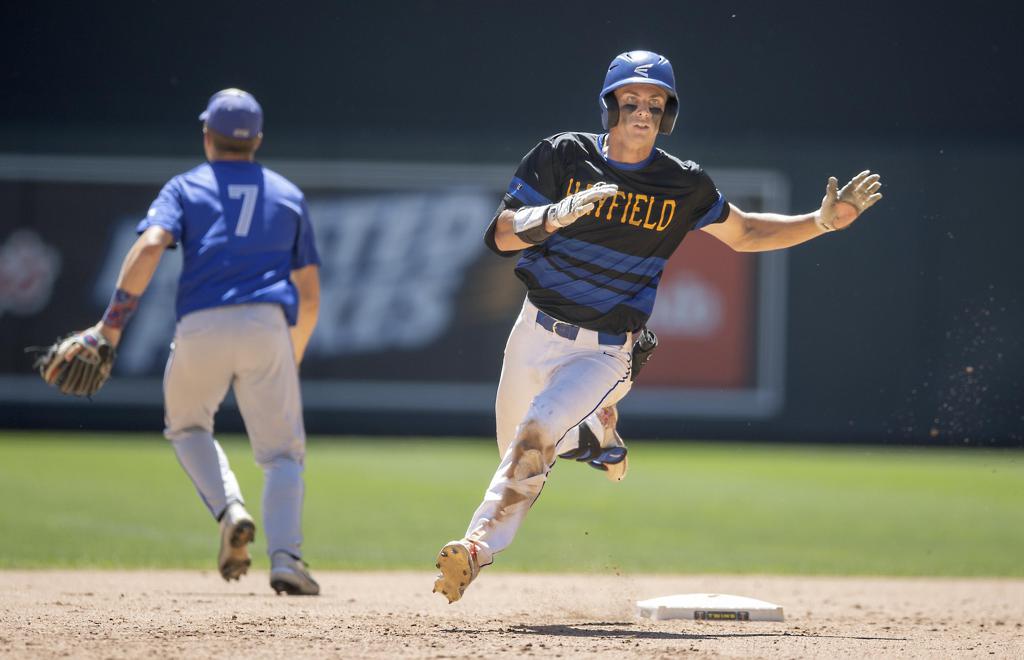 Hayfield followed up its first boys’ basketball state championship in April with its first baseball state title Friday, defeating New York Mills 7-4 in the Class 1A championship at Target Field. The Vikings rallied from an early 4-0 deficit, scoring the final seven runs.

“We knew we had something special, and will go down in school history,” Vikings senior shortstop Erik Bungum said. “It’s such a surreal feeling.”

Even more so when it’s your final prep season. Bungum delivered a bases-loaded clearing double off New York Mills losing pitcher Dre Roberts, capping a four-run top of the fifth inning to give the Vikings a 6-4 lead.

“I knew I had to come up big,” Bungum said. “After striking out in my first two at-bats, I had to expand my strike zone. I was able to sit on his fastball and pull it down the third-base line.”

He took more pride in his defense an inning later. New York Mills had the bases-loaded with one out when losing pitcher Dre Roberts lofted a shallow fly ball behind third base. Bungum calmly retreated and made a tumbling catch, quickly popping up to hold the runners.

“I have always been able to make that play,” Bungum said. “To make it in the state championship at Target Field was great.”

No. 1-ranked Hayfield (26-0) added a run in the top half of the frame when winning pitcher Easton Frichter tripled to right-center field and scored on senior Joey Tempel’s sacrifice fly to center field. Tempel scored the first run in the fifth on senior cousin Isaiah Tempel’s bases-loaded single.

New York Mills (23-3) got to Frichter for four runs in the second, stringing together six singles. Sophomore Will Oaks knocked in the first run with single to left field. Senior Jace Randolph followed with run-scoring hit off Frichter’s glove before junior Brenn Salo had a two-out, two-run single to right field.

“I was making good pitches,” Frichter said. “They were making contact and hitting them where we weren’t.”

Hayfield made up half of the deficit in the third. Junior Karver Heydt and senior Lucas Hansen had two-out RBI hits.

“We just had to keep grinding like we have all year,” Frichter said. “We knew we were going to score runs.”

All 10 players in the Vikings' starting lineup also were on the basketball roster, including four starters.

“We’ve been together our whole lives playing sports,” Frichter said. “This is an unreal feeling.”