Among the winners in Class 4A: Minnetonka knocked off No. 1 Stillwater and Farmington blanked Mounds View. 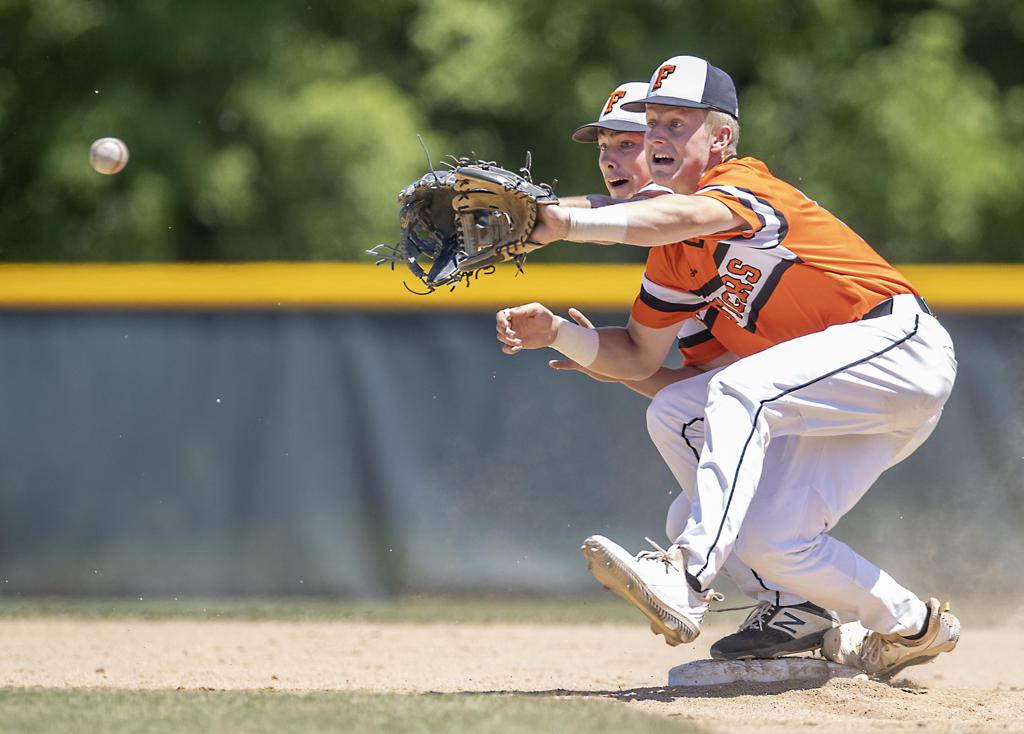 Farmington's Kyle Hrncir, left, and Noah Drusch both made a play at second during the bottom of the third inning in the Class 4A baseball quarterfinal at the Chaska Athletic Park [ELIZABETH FLORES • liz.flores@startribune.com]

It was a wild finish for Minnetonka.
Senior Josh Daniel scored on a wild pitch with one out in the top of the eighth inning as the Skippers rallied to upset No. 1-seeded Stillwater 6-5 in the Class 4A baseball quarterfinals Tuesday at Chaska Athletic Park. Daniel walked and advanced to third on an errant pickoff attempt.
“I’m happy to be playing another day,” Skippers coach Paul Twenge said. “Our kids just don’t want to stop playing.”
Senior Dillon Hanson hit a two-run home run with one out in the top of the seventh for Minnetonka (16-10) to tie the score at 5-5.
“Perfectly timed,” Twenge said. “Dillon has a very fast bat.”
Stillwater (20-5) took a 5-2 lead with three runs in the fourth inning, breaking a two-all tie. Senior Alex Ritzer drove in the first run with a two-out double while senior Kade Peloquin followed with a two-run home run to center field.
Junior Caleb VanderPlas was superb in relief for the Skippers. He worked 4⅓ hitless innings but did issue three walks and didn’t strike out a batter.
“Caleb’s been doing that all year for us,” Twenge said. “He pitched well and our kids played good defense behind him.”

In other Class 4A quarterfinal games:

Farmington 1, Mounds View 0: Senior Korey Dahlberg threw a three-hit shutout as the Tigers slipped past the Mustangs.
Dahlberg struck out eight and walked three in going the distance to outduel Mounds View senior Ben Rosin, who allowed only four hits while also striking out eight but walking none.
Farmington (19-6) scored the game’s lone run in the second inning. Junior Ethan Coyer led off the inning with a triple to right field. Rosin struck out the next two hitters before junior Connor Weed singled to right field, scoring Coyer.
Mounds View (17-8) loaded the bases against the Tigers in the sixth inning with one out, but Dahlberg got out of the jam by inducing a double-play grounder.

Park of Cottage Grove 4, Rogers 0: Tucker Novotny struck out 13 while allowing four hits and two walks in 6⅔ innings to pitch the Wolfpack past the Royals.
Park of Cottage Grove (21-7) took advantage of two Royals errors for three unearned runs in the third and fourth innings.
The Wolfpack got on the board in the third inning, when Ben Johnson scored on the first Royals error of the game. Jack Weidner drove in Micah Runion to extend the lead in the fourth inning. Weidner and Johnson gave the Wolfpack a 4-0 lead by scoring on the Royals’ only other error of the game. Josh Hatano had two hits for the Wolfpack.
The best chance Rogers (18-8) had came in the second inning, but Jack Olsen was out at home to end the inning. Chase Baxter had two hits for the Royals.

Andover 10, Hopkins 0: Anthony Pardo and Samuel Angell combined for a two-hit shutout as the Huskies (22-4) blanked the Royals (16-9). Teammate Carson Wadel had three hits and four RBI to lead the offense.

St. Thomas Academy thrives being an underdog.
The Cadets’ bats have been sizzling the past 10 days, banging out 17 hits in a 16-9 upset victory over No. 1-seeded Willmar (22-3) in the Class 3A baseball quarterfinals Tuesday at the Mini Met in Jordan.
The Cadets scored at least three runs in each of the first three innings, five coming in the third. St. Thomas Academy (18-9) has plated at least a dozen runs in its past four games, three while coming through the loser’s bracket in Section 3.
Benjamin Taxdahl went 4-for-4, scored five runs and drove in two. Leadoff hitter and winning pitcher Tristin Thilmany went 3-for-3 and scored four runs while Robert Cunningham and Gavin Engelbert each had four RBI. Engelbert hit a two-run home run to cap the third inning.

In other Class 3A quarterfinal games:

Grand Rapids 6, Marshall 2: Andrew Sundberg drove in four runs with an RBI single and bases-loaded double to lead the Thunderhawks (18-7) past the Tigers (17-7). Sophomore Kyle Henke allowed only five hits and two runs in the complete-game victory.

Sartell 3, Albert Lea 2: Steven Brinkerhoff’s solo home run with one out in the bottom of the seventh lifted the Sabres (22-3) over the Tigers (12-12).
Mahtomedi 2, Sauk Rapids-Rice 0: Luke Loughlin pitched a four-hit shutout and Tony Neubeck was 3-for-3 with two RBI to lead help the Zephyrs (18-5) hold off the Storm (10-13). Loughlin, a lefthander, struck out nine.

Aitkin 2, Albany 0: Logan Olson pitched a two-hit shutout and drove in a run with a seventh-inning double to pace the Gobblers (22-5) past the Huskies (22-4). Caiden Kjelstrom drove in the Gobblers’ first run with a fifth-inning single.

Belle Plaine 2, Atwater-Cosmos-­Grove City 0: Jackson Kruger allowed only two hits and struck out 17 for the Tigers (19-4) to outduel Josh Kingery, who allowed three hits, one earned run and struck out 18 for the Falcons (22-3).

Plainview-Elgin-Millville 3, Wadena-Deer Creek 1: Connor Schumacher allowed only four hits and struck out 13 to pitch the Bulldogs (22-3) past the Wolverines (25-4).

Hayfield 16, Adrian/Ellsworth 1: The unbeaten Vikings didn’t waste any time proving they are the team to beat.
Hayfield (24-0) scored six runs in the first inning against the Dragons (14-13) in a game called in the fifth inning because of the 10-run rule. The Vikings had another six-run uprising in the fourth.

Randolph 9, Fosston 5: Brandon Gerster and Joel Gehrke each drove in two runs as unbeaten Randolph (23-0) scored five runs in the fifth inning to eliminate the Greyhounds (19-7).

Springfield 8, South Ridge 3 [10 inn.]: Jason Berberich delivered a bases-loaded triple in the Tigers’ five-run 10th inning as the Tigers
(19-7) outlasted the Panthers (21-4). It was the second triple of the day for Berberich, who was 3-for-5 with four RBI.
RON HAGGSTROM and JOEL RIPPEL