The Section 3 winners emerged from the losers' bracket to make their first state tourney since 1993. 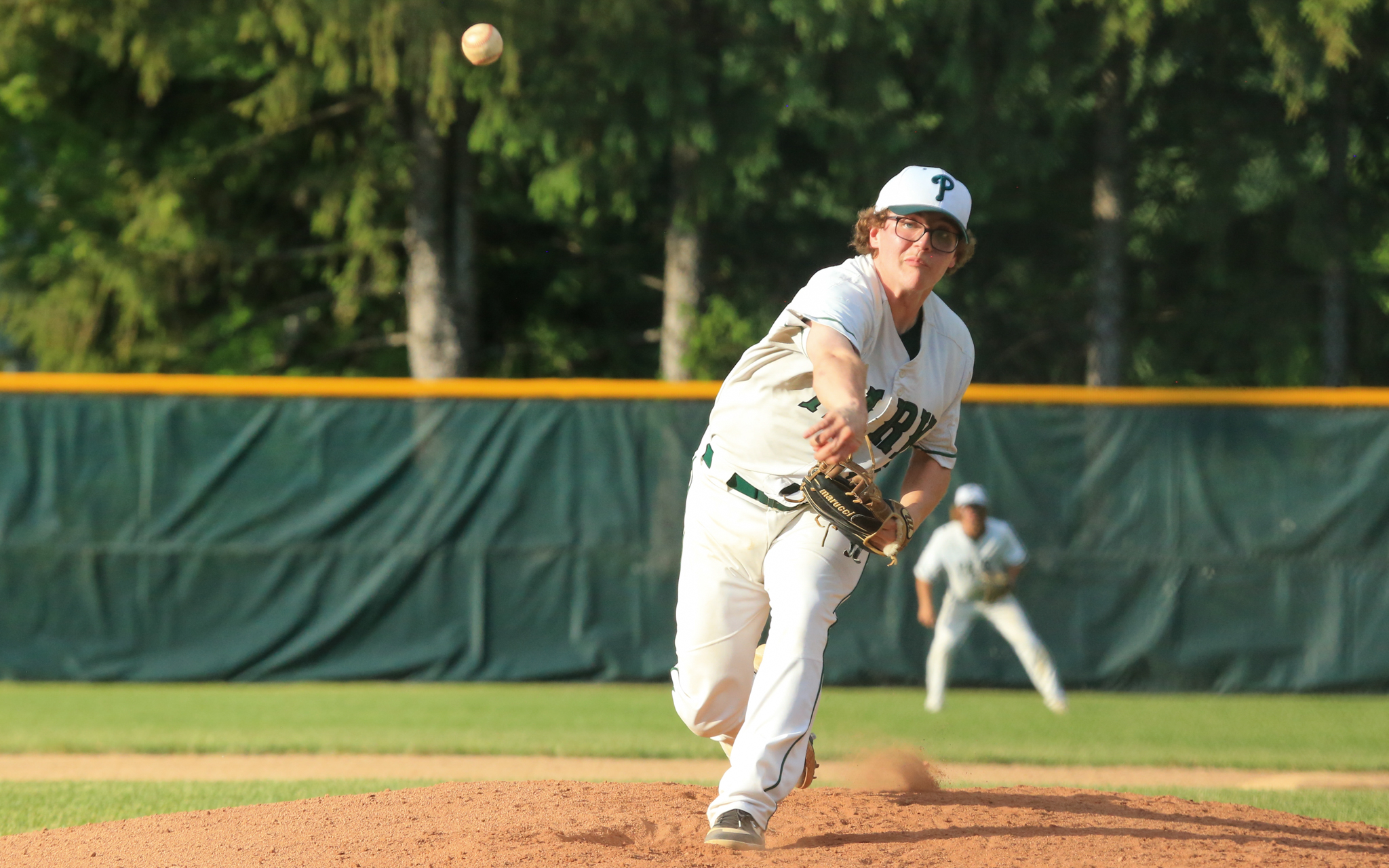 Park of Cottage Grove's Sam Janski struck out five batters and had four RBIs in the second game of the Class 4A, Section 3 championship in Burnsville. The Wolfpack defeated the Wildcats twice, 5-0 and 9-3. Photo by Jeff Lawler, SportsEngine

History was waiting to be written at Wednesday’s Class 4A, Section 3 championship.

Second-seeded Eagan was seeking its first state tournament appearance since 2009. The Wildcats also faced the path of least resistance, advancing through the winners’ bracket to get two games, if needed, to put away No. 3 seed Park of Cottage Grove at Alimagnet Park in Burnsville.

Park of Cottage Grove, meanwhile, lost 15-0 to Eagan in section play on June 2, relegating the Wolfpack to the losers’ bracket to get a chance to end a state tournament drought dating to 1993. The Wolfpack beat Eagan 5-0 in Wednesday's first game and 9-3 in the nightcap to seal a Class 4A state tourney berth.

“It means a great deal to us, our community, our school, our program,” said Wolfpack coach John McGowan, who’s in his 10th year at the helm. “We’ve been working hard, and just all around trying to get our program back to where it was in the past and our kids are having fun doing it." 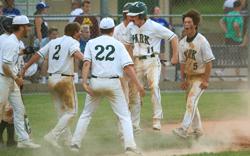 Park of Cottage Grove (20-7) relied on star senior lefthander Tucker Novotny, a Gophers commit, to help the Wolfpack get by top-seeded Rosemount in Tuesday’s final losers’ bracket game. That made him unavailable to pitch Wednesday due to pitch count rules.

The team’s pitching depth didn’t always shine throughout the season, but the staff stepped up and shut down an Eagan squad (17-8) that had been on a five-game winning streak.

Conor Mestemacher, who took the loss against Eagan on June 2, looked like a new man Wednesday in Game 1, limiting Eagan to two hits and three walks in a complete-game effort. Mestemacher tallied three strikeouts and relied on inducing weak contact to force a second game.

“He pounded the zone really well,” McGowan said of Mestemacher. “He threw a lot of strikes, kept the balls down. Our pitchers did what we asked them to do and we played pretty good defense behind him as well.”

The Wolfpack scored once in the second inning and sprinkled in insurance runs to slowly put the game away. All nine Park of Cottage Grove starters reached base at least once in Game 1 and they combined for seven hits against Lincoln Berry, who went the distance Wednesday and was the winning pitcher when the teams met on June 2.

The second game breezed by in the early going.

Sam Janski started for Park of Cottage Grove on the mound and was an out away from completing a complete game but he reached the pitch limit. Mestemacher, who still had pitches to spare, came on in relief to record the final out.

Janski, who pitched to contact like Mestemacher had in Game 1, struck out five and took advantage of stellar defense. Janski was also the catalyst at the plate with a 3-for-4 effort with four RBIs and two doubles.

A bases-clearing, three-run double in the sixth inning from the Wolfpack blew the game open for a six-run lead at the time.

“It’s amazing. So great, I can’t even describe it,” Janski said of winning the section championship. “Our big mindset is 'We’re not done yet.' We just want to take it one game at a time; we don’t want to look too far ahead.”

It would have been tough to see Janski’s standout performance on the mound coming prior to Wednesday. He entered the matchup with just 9 1/3 innings logged this season and just one outing was longer than two innings.

“He hasn’t had as many innings as the other pitchers, but he threw very well today and dug down,” McGowan said. “It was great. He showed up and did a great job. Not only on the mound, but at the plate.  I loved his mental toughness.”

Park of Cottage Grove ended up on the right side of the seesaw with a seven-run sixth inning. The first three Wolfpack batters reached base to chase starter Ryan Danich from the game and the hit parade continued from there.

Now the Wolfpack can get some rest after playing four elimination games in three days in 85 degree-plus heat. The team awaits its opponent and game time for its state quarterfinal matchup next Tuesday at Chaska Athletic Park. It’ll be just the program’s second state tournament appearance.

“I couldn’t have done it without my team. Fielders getting every ball and run support,” Janski said. “It seems like everyone was on today. Everyone needed to be and everyone was.” 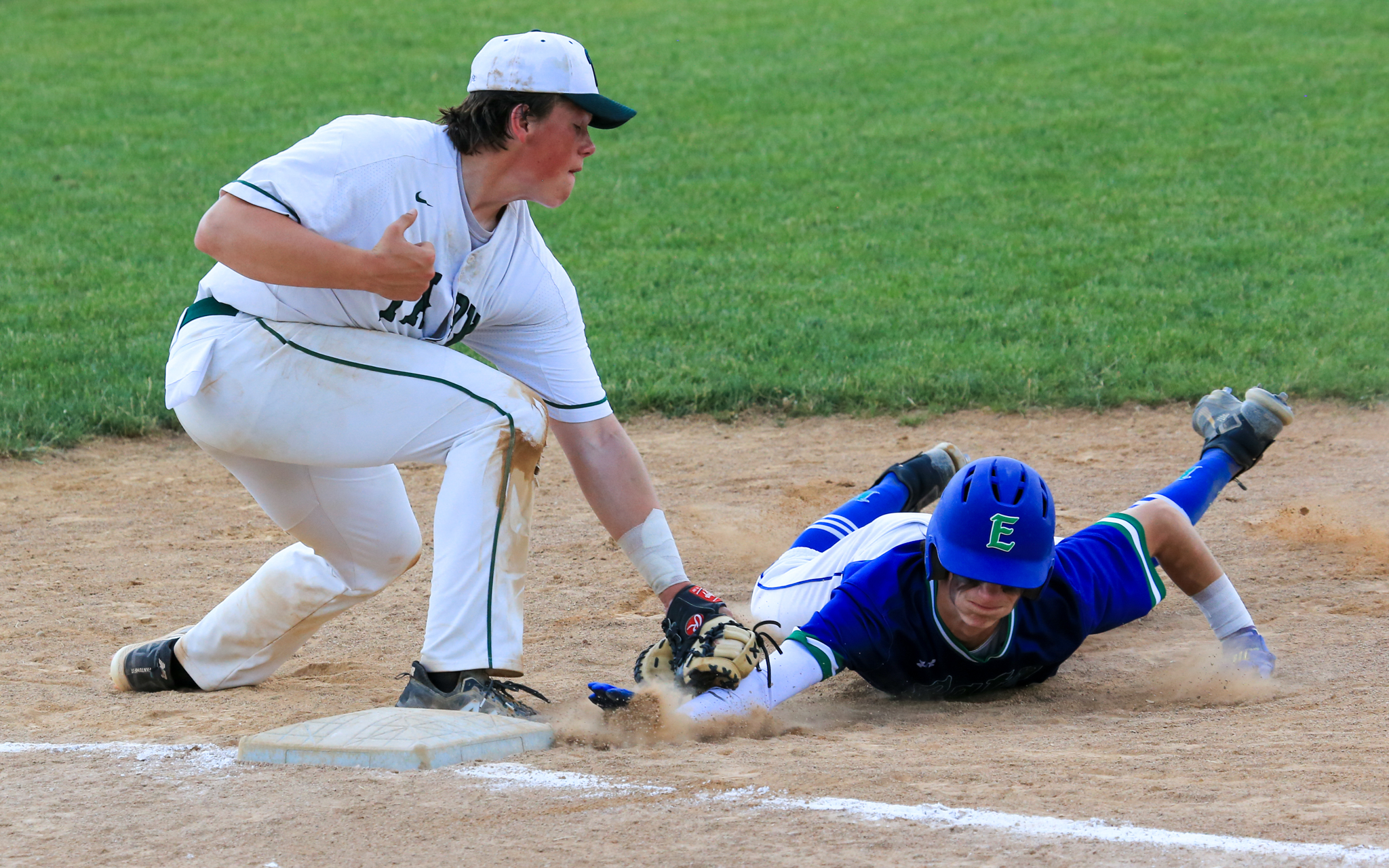 Park of Cottage Grove's Will Smoot applies the tag to catch Eagan’s Liam Martin on a pickoff play early in Game 1 of the Class 4A, Section 3 final. The Wolfpack defeated the Wildcats 5-0 to force a second game. Photo by Jeff Lawler, SportsEngine

Park of Cottage Grove is headed to the state tournament for the first time since 1993.

The third-seeded Wolfpack emerged from the Class 4A, Section 3 losers’ bracket by defeating No. 2 seed Eagan 9-3 Wednesday evening at Alimagnet Park in Burnsville. The Wolfpack beat the Wildcats 5-0 earlier in the day to set up the big finale.

Sam Janski was the winning pitcher in the nightcap. He threw 6 2/3 innings and he also impressed at the plate, hitting 3-for-4 with two doubles and four runs batted in.

Ryan Danich took the loss for the Wildcats in five-plus innings.

A scoreless game through four innings gave way to a more action-packed ending.

Eagan’s first run of the day against Park of Cottage Grove (20-7) came on a two-out single by Matt Hage in the top of the fifth inning. The lead was short-lived, however, as Ben Johnson singled in a run in the fifth to tie it for the Wolfpack. Janski added a RBI single to put his team ahead 2-1.

Eagan (17-8) tied it at 2 on a Griffin Fenske single in the sixth but Park of Cottage Grove had the answer with seven runs in the bottom half of the inning. Tessman had a RBI double, Micah Runion walked and Johnson was hit by a pitch to each bring in a run.

Janski added a three-run double and Clayton Beaurline had a RBI single to expand the lead to 9-2.

Sam Schachtman hit a pinch hit solo home run for Eagan in the seventh. He was one of seven Wildcats with one hit.

Park of Cottage Grove extended its season, at least another couple of hours.

Needing to win twice in a row Wednesday to avoid elimination and claim this year’s Class 4A, Section 3 championship, third-seeded Park of Cottage Grove defeated No. 2 seed Eagan 5-0 in Game 1 at Alimagnet Park in Burnsville.

Wolfpack pitcher Conor Mestemacher, who was the losing pitcher when Eagan beat the Wolfpack 15-0 in five innings in the second round of the section playoffs on June 2, went the distance on the mound Wednesday. The righthander allowed two hits and one walk with three strikeouts.

Samuel Janski and Jackson Tessman each went 2-for-4, leading Park of Cottage Grove (19-7) at the plate. Both had a double and Tessman drove in a run. Teammate Jackson Weidner added a solo home run.

Lincoln Berry, who was the winning pitcher in the teams’ previous meeting, took the loss for the Wildcats (17-7). The pitcher allowed seven hits, a walk, hit two batters and struck out six batters in seven innings. Berry singled and stole a base.

Charlie Steffen also hit a single and stole a base for Eagan, which saw its five-game winning streak snapped Wednesday.

The winner of Game 2 Wednesday evening gets a berth in next week’s Class 4A state tournament. 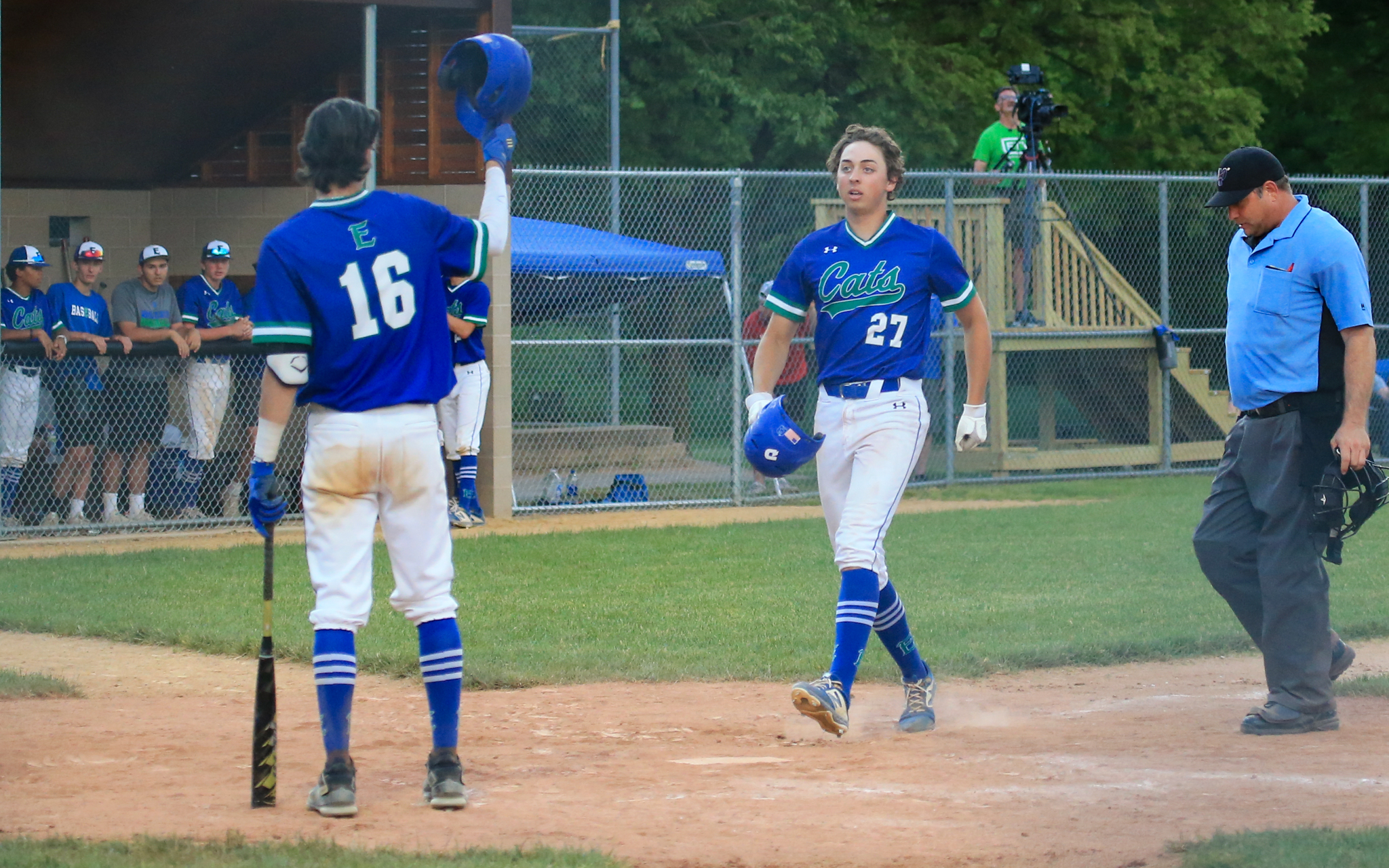 Eagan’s Sam Schachtman (27) arrives at home plate after hitting a home run in the second game of the Class 4A, Section 3 Championship. The Wildcats were eliminated after losing twice to the Wolfpack, 5-0 and 9-3. Photo by Jeff Lawler, SportsEngine