Hunter Gerber took advantage for the Crimson with the bases loaded in the seventh to beat the Rebels. 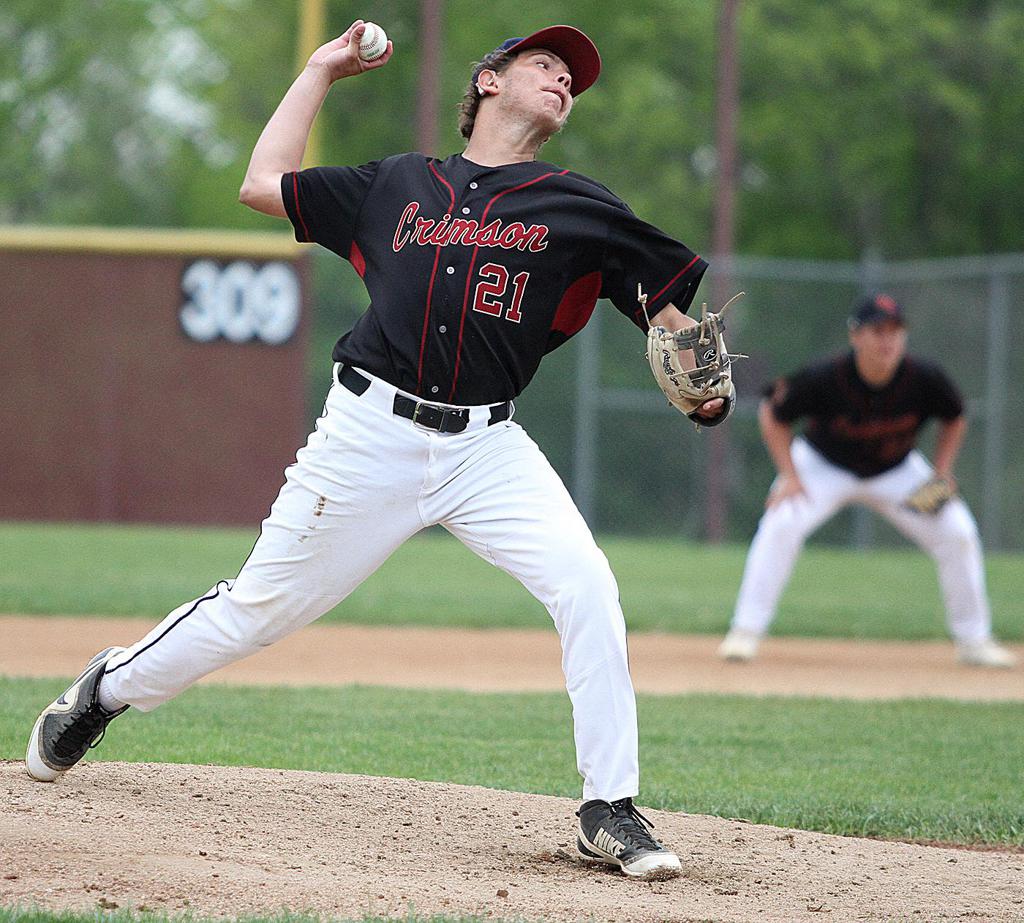 Maple Grove coach Darby Carlson said if the Crimson can get their bats in order, they can be a pretty dangerous group.

The Crimson, ranked No. 10 in Class 4A by the Minnesota High School Baseball Coaches’ Association, didn’t see a ton of hits on Tuesday when they took on No. 3-4A Champlin Park at Maple Grove High School. They did, however, show just how dangerous they could be.

With the game squared 2-2 in the bottom of the seventh inning, Maple Grove sophomore Hunter Gerber cracked a single past second with bases loaded, bringing in the game-winning run. The 3-2 victory was the Crimson’s fourth consecutive.

“I feel like we’re progressing a little bit. It was a good win, Champlin is a nice ball club,” Carlson said. “It’s one of those games we’re struggling a little bit hitting consistently.” 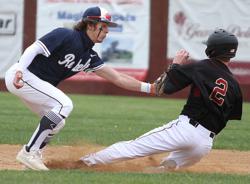 While hits were hard to come by in a low-scoring affair on Tuesday, Gerber was able to record a pair of hits and finished 2-for-4 with a double and the walk off.

“I feel like I’m at my best right now, honestly. I feel like most of the balls I hit are barrel, so it’s just good to see them drop,” Gerber said. “It’s just a matter of whether they drop or not.”

The Crimson (11-4, 8-3) would have liked to see more hits drop, but Champlin Park was stingy on defense and saw a strong start from pitcher Myer Schmitz. Schmitz kept the Crimson off the board for five innings, and pitched six total, finishing with five strikeouts.

Schmitz’s strong start allowed the Rebels (11-6, 9-2) to strike first in the fifth inning. Senior Dylan Shuck reached on a single and was brought home off a double from fellow senior Clayton Caswell. Center fielder Evan Hammonds followed up with a single to left to bring Caswell home.

Maple Grove, meanwhile, had tabbed a couple hits, but couldn’t put anything on the board and found themselves down 2-0.

But the Crimson were able to string together a couple of hits in the sixth inning, and they plated enough runs to tie it up.

Junior Cam Elder opened the inning with a single and was brought home not long after by another single from Zane Vitense. Vitense went home for the tying run shortly after, when third baseman Aiden McMahon tabbed a single of his own.

“I give the kids credit here at the end. They put a couple balls into play and then Gerber hit… We’ll take the win,” Carlson said.

From the mound, Maple Grove pitcher Kole Krier settled back in after giving up two runs in the fifth. Krier tossed all seven innings and tallied eight strikeouts. Carlson said it was Krier’s best performance of the season and that he’s excited about the team’s pitching staff.

“It’s great to see and you love to see it. There’s no better kid who deserves it more,” Gerber said of Krier’s performance.

With a strong pitching staff and a win over one of the best teams in the state, the Crimson have reason to be optimistic as the season moves toward the playoffs. But Carlson said they “aren’t even looking” at the postseason yet. They still have five games remaining, including a season-closing matchup against No. 1-4A St. Michael-Albertville.

“It’s just a matter of getting better. And hopefully our hitting gets hot at the right time, our pitchers continue to throw strikes, and we’ll be alright,” he said. 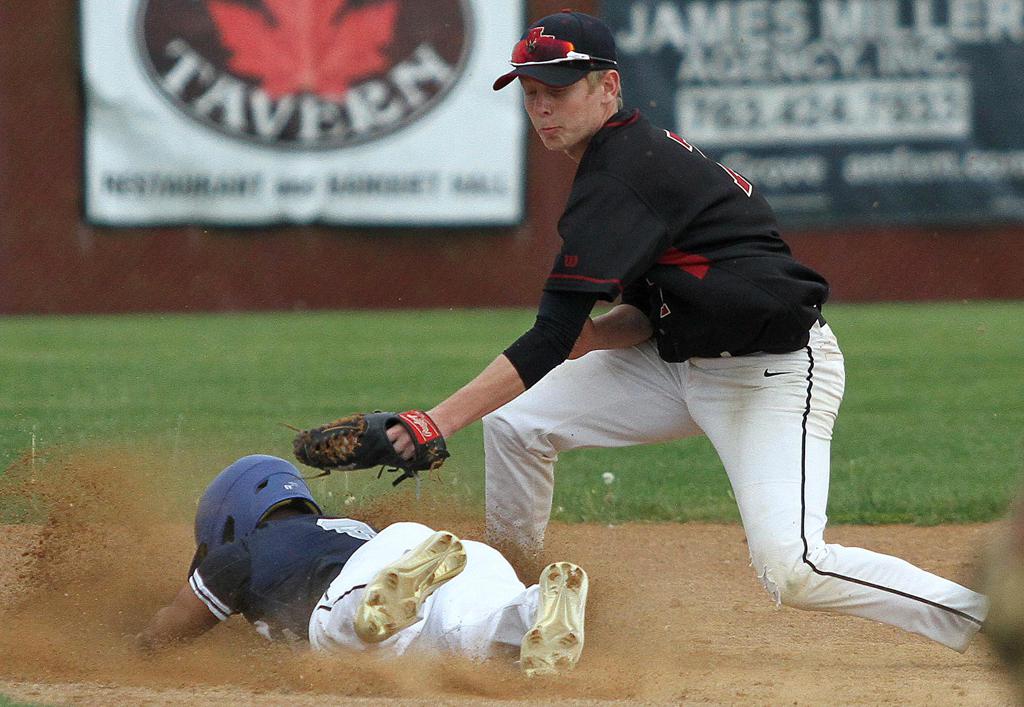 Maple Grove was down to its last out while tied 2-2 in the bottom of the seventh inning.

The Crimson filled the bases and had one last opportunity to break the tie with Northwest Suburban Conference rival Champlin Park before the game went into extra innings.

With a full count, sophomore first baseman Hunter Gerber cracked a single past first base and scored junior Cam Elder to earn a 3-2 win over the Rebels at Maple Grove High School on Tuesday. The Crimson, ranked No. 10 in Class 4A by the Minnesota High School Baseball Coaches’ Association, have won four straight.

Gerber hit a double in the second inning and finished 2-for-4 for the Crimson (11-4), who trailed 2-0 after the fifth inning. Singles from Zane Vitense and Aiden McMahon brought in the tying runs in the bottom of the sixth.

The No. 3-4A Rebels scored a pair of runs in the fifth inning. Senior Clayton Caswell hit a double that brought home Dylan Shuck. Evan Hammonds brought Caswell home on a single later in the inning.

Both teams saw strong starts from their pitchers. Myer Schmitz threw six innings and struck out five, while only giving up two runs for the Rebels (11-6). Kole Krier went all seven, allowing two runs and striking out eight batters. 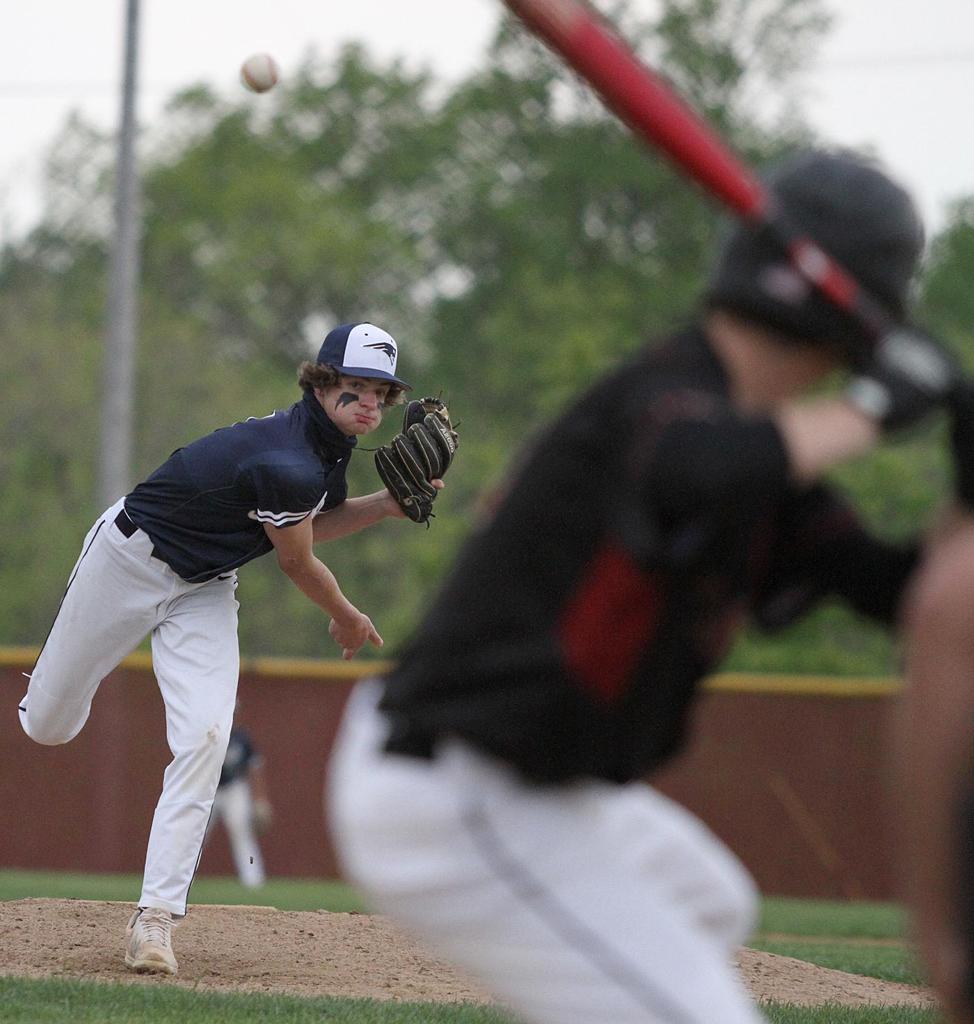