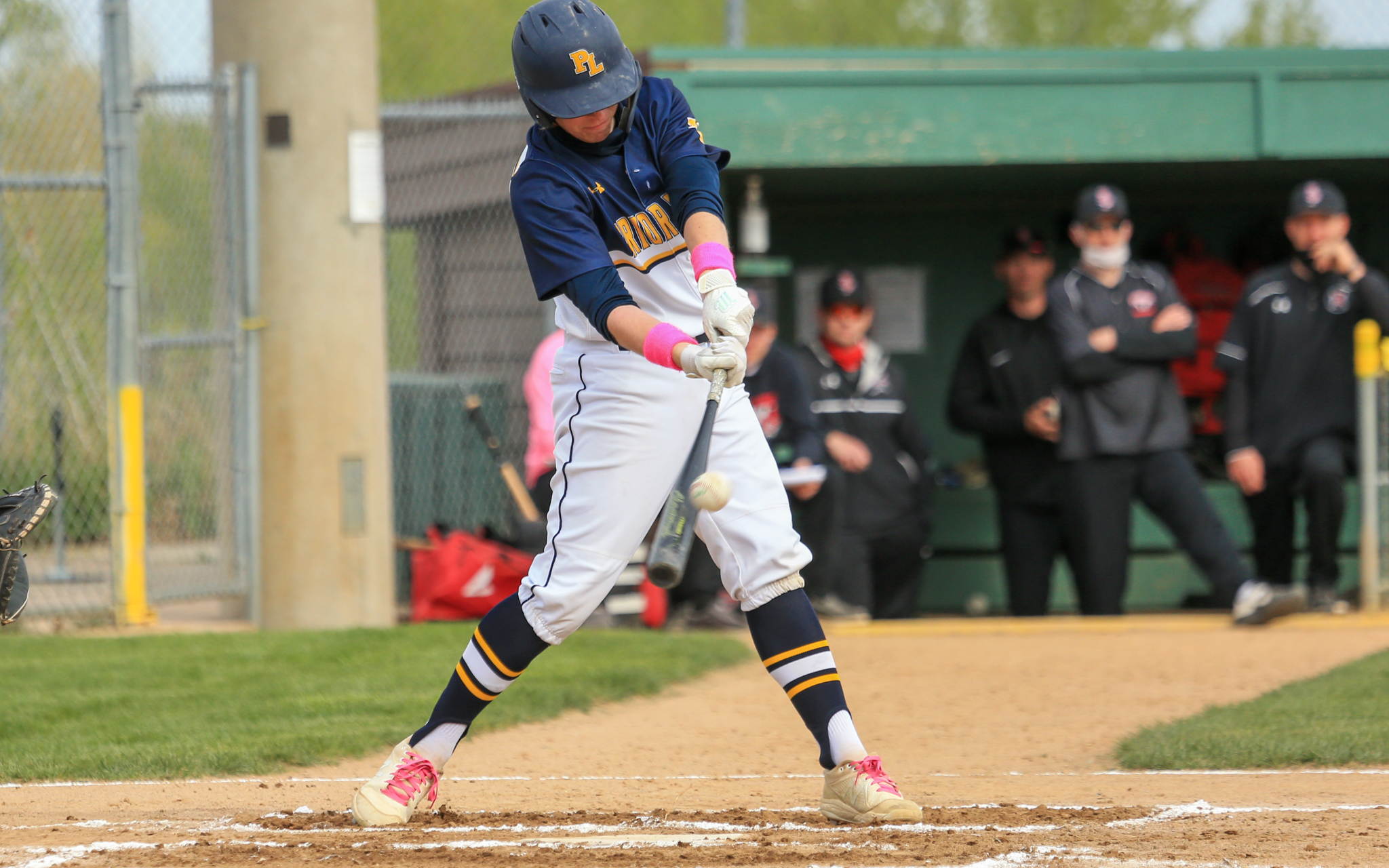 Prior Lake's Harry Fleek hits a two-run double in the bottom of the first inning against Belle Plaine Saturday. The Lakers defeated the Tigers 9-2 at Memorial Park in Prior Lake. Photo by Jeff Lawler, SportsEngine

Saturday’s matchup between Prior Lake and Belle Plaine was like a lightly cooked steak: Rare and pink.

In a Strikeout Cancer fundraiser game, featuring fans and players donning pink garb and accessories, the two squads from schools separated by a 30-mile drive met for the first time in over a decade.

Prior Lake, a Class 4A program, struck for six runs in the game’s opening two innings and cruised from there to defeat Class 2A opponent Belle Plaine 9-2 Saturday at Memorial Park.

The Lakers outhit the Tigers 8-5, thanks in part to a 3-for-3 effort from Lance Goeschel, the team’s No. 9 hitter who had two RBIs.

“I think we actually played well against this team,” Goeschel said. “We kind of showed them that up in [Class] 4A we have more good depth all around the board. Belle Plaine had two or three really good top dogs and our whole team is more of that.” 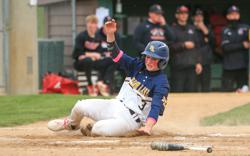 “I was getting fastballs early in the count, so I jumped on those,” Goeschel said. “I hit barrels and was hitting it around the park today, which felt good.”

Harry Fleek flanked the Prior Lake attack with a pair of run-scoring doubles and teammate Michael Gabbard added a RBI double.

Prior Lake (8-6, 6-6) won its third game in a row and sixth in the last seven. Half of its 14 games so far have been decided by two runs or fewer. That wasn’t the case Saturday, however, as the Lakers capitalized on their 6-0 early advantage and never relinquished control from there.

“It was a big win. It was nice to see the offense hit the ball around there,” said Prior Lake assistant coach Taylor Smith. “That’s been the key for us the last couple games, we started slow. The offense has come around.”

That was plenty of run support for starting pitcher Lance Behrens. He had a no-hitter going through 3 2/3 innings before Cade Morrison’s bloop single to right scored two runs for Belle Plaine, ranked No. 8 in the Class 2A coaches’ poll.

Morrison’s 2-for-3 day led the way at the plate for the Tigers, who entered Saturday’s contest averaging 10 runs per game against Class 1A and 2A competition.

Behrens pitched four innings and allowed one hit to earn the win. He was relieved by three pitchers, including Evan Bruce, who threw 2 1/3 scoreless innings.

There were no errors in the game, but some makeable defensive plays for Belle Plaine aided the Lakers’ offensive outburst.

“It was a fun matchup,” said Belle Plaine coach Pat Schultz. “They’re obviously a big team, they’re a good team. We knew going in it’d be a challenge, but it was good for our guys.”

Smith noted each team has an assistant coach that has played the other on their respective amateur baseball town teams.

“Prior Lake versus Belle Plaine, that’s a game I’d call an old school matchup,” Smith said. “For many years, the two town ball teams with the Jays and Mudcats in Prior Lake, we have played Belle Plaine in the past. It’s cool to play one of these close towns and they’re pretty good in 2A."

All of the Tigers' wins have come by four or more runs. In addition to their defeat to Prior Lake, their only loss came 4-0 at home to Sibley East, a team Belle Plaine (9-2, 6-1) will meet again Monday in Arlington.

“It’s been a really good year for us so far,” Schultz said. “We’ve been taking advantage of things and playing pretty well. We’re off to a real strong start. Even a loss like this helps us, and I hope it shows us how to compete against a good team and how to challenge ourselves against good players.” 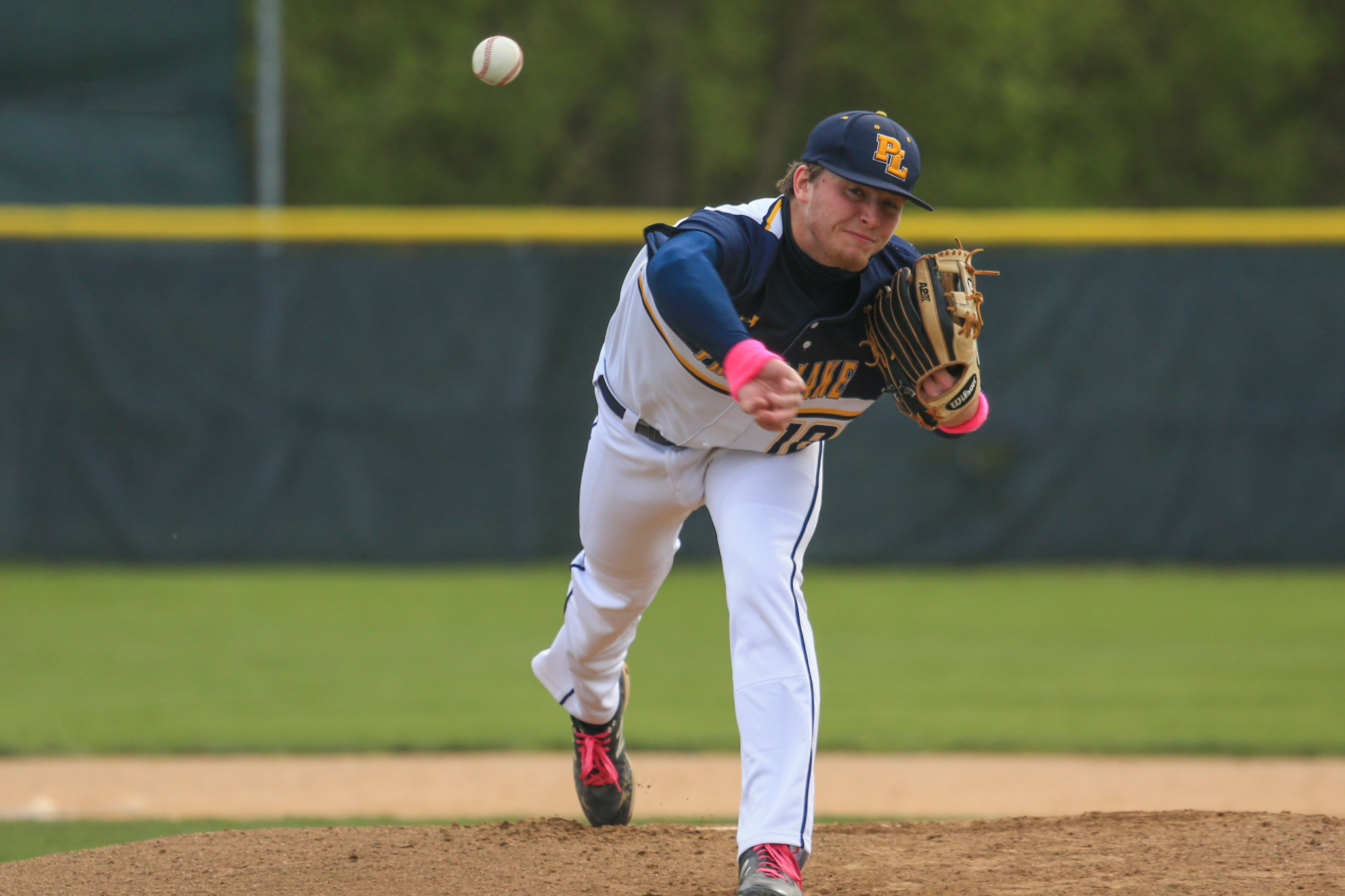 Prior Lake's Lance Behrens (18) delivers a pitch against Belle Plaine Saturday evening. Behrens had five strikeouts in four innings in the Lakers’ 9-2 victory over the Tigers at Memorial Park in Prior Lake. Photo by Jeff Lawler, SportsEngine

In a rare matchup between a Class 4A program and a Class 2A opponent, bigger-school Prior Lake came out on top as the Lakers defeated Belle Plaine 9-2 Saturday afternoon at Memorial Park.

Lance Behrens, who earned the win on the mound, had a no-hitter through 3 2/3 innings of a four-inning outing. A pair of three-run innings from the Prior Lake offense to open the game gave him a comfy cushion to settle in.

Lance Goeschel led the way for the Lakers (8-6, 6-6) at the plate, going 3-for-3, coming up a home run shy of the cycle. Goeschel drove in two runs and scored twice from the No. 9 slot in the lineup.

Behrens’ batterymate, Harry Fleek, drove in a run on each of two doubles.

Cade Morrison ended Behrens’ no-hitter with a bloop single to right field, which led to two runs scored in the fourth inning. Morrison led the way for Belle Plaine, ranked No. 8 in the Class 2A coaches’ poll, with a 2-for-3 outing.

Jake Brandenburg took the loss in two innings of work for the Tigers (9-2, 6-1). 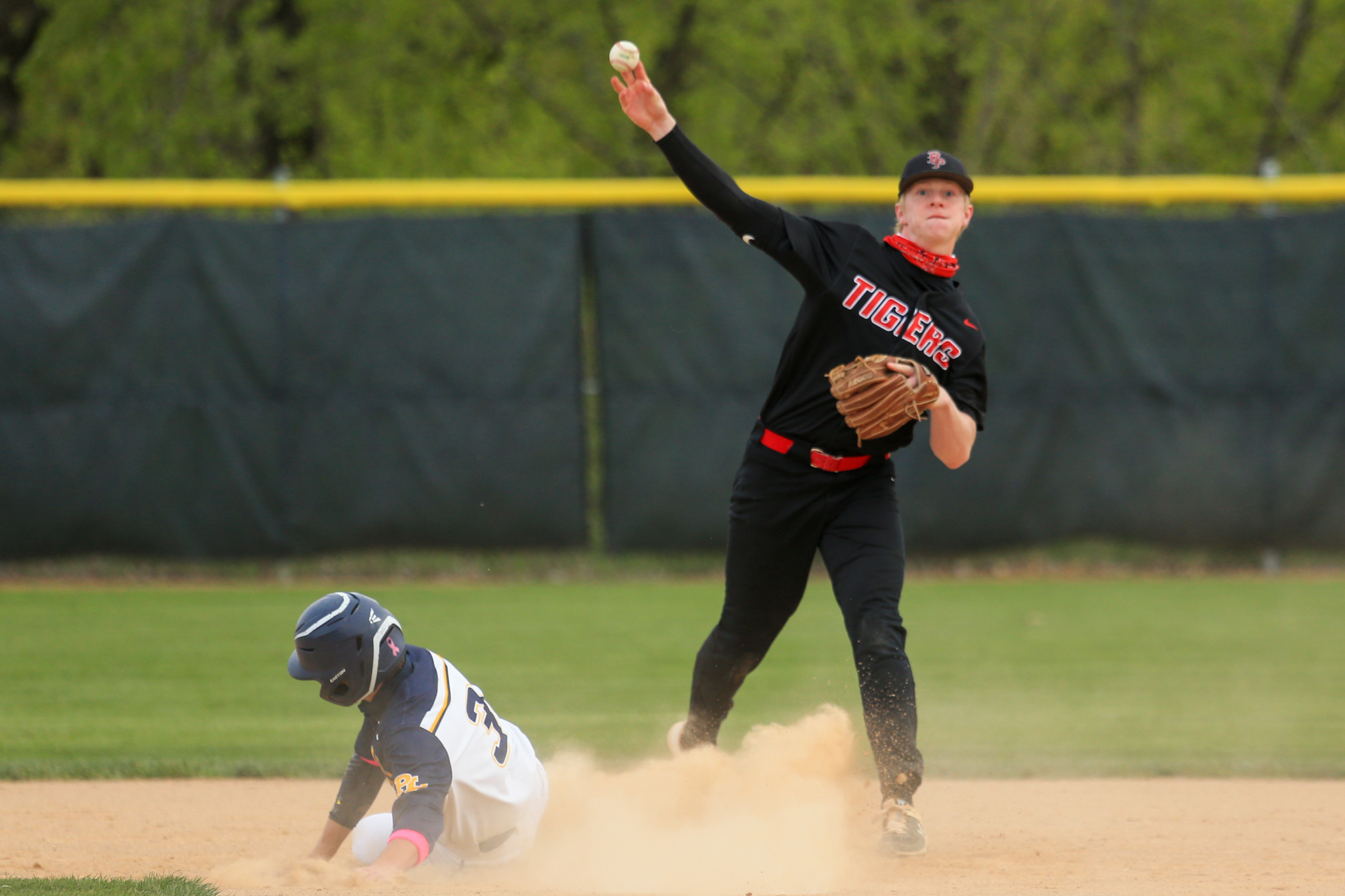 Belle Plaine second baseman Jackson Kruger turns to make the throw to first base on a successful double play against Prior Lake. The Tigers fell to the Lakers 9-2 Saturday evening at Memorial Park in Prior Lake. Photo by Jeff Lawler, SportsEngine