A junior who has committed verbally to the Gophers, Berkland helped the Trojans win a basketball title this month and was on the 2019 Class 6A football championship team. 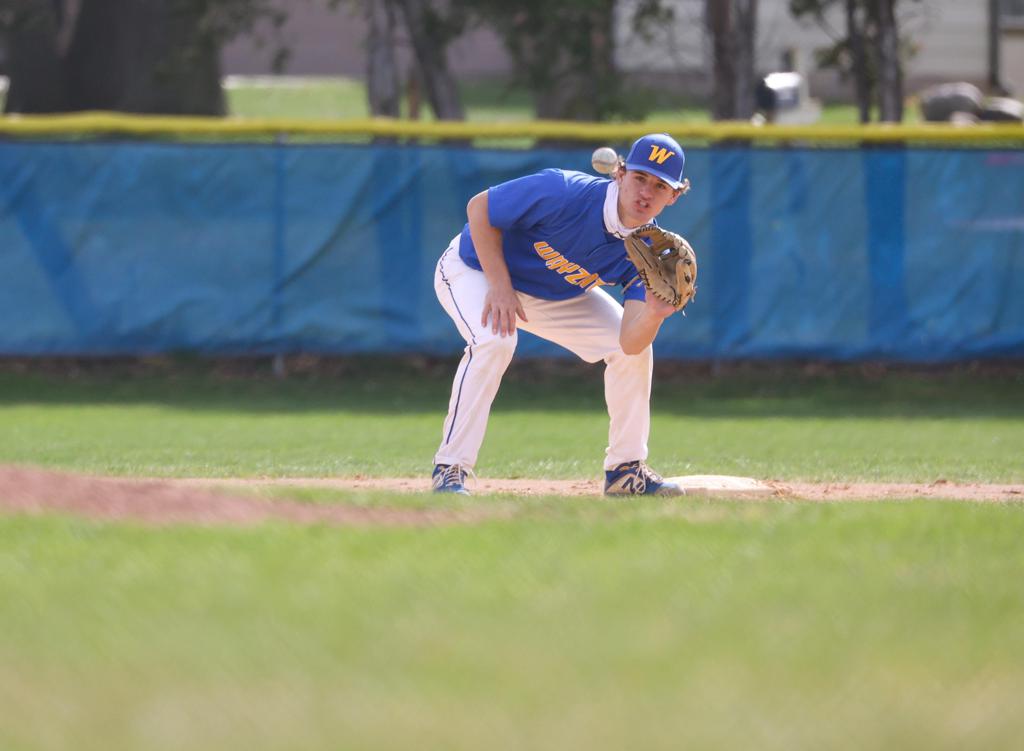 Wayzata junior Drew Berkland is seeking a state baseball title with the Trojans to go with football and basketball championships earned during his high school career. Photo: Cheryl A. Myers, SportsEngine

Junior Drew Berkland stood on the Target Center floor nearly two weeks ago with a huge smile on his face, his index finger raised indicating “We’re No. 1.” Wayzata had just won its first boys’ basketball state championship since 1959.

More than 16 months earlier, Berkland did likewise at U.S. Bank Stadium, celebrating the Trojans’ Class 6A football state championship. It was the program’s fourth state title and first since 2010.

“I have been fortunate enough to do it twice now,” Berkland said. “It’s a surreal feeling, seeing all the hard work my teammates and I have put forward pay off. We put in a lot of hard hours to reach those goals.”

The three-sport athlete is one title from a triple crown of state championships. The one he seeks happens to be his No. 1 passion — baseball.

“It’s a year-round process for me,” Berkland said. “There is not a whole lot of breaks. It’s back-to-back seasons all of the time. I like that part of it.”

Berkland’s favorite pastime is also the lone sport he didn’t take to the field for an entire season with his teammates. The 2020 high school season was canceled by the COVID-19 pandemic.

“It was really tough to see our seniors have to go through that,” Berkland said. “Seeing the look on their faces when they found out the season was canceled was not a good place or good feeling for any one. It was a bump in the road for everyone.”

“It’s always exciting when one of our season ends and my next season starts a couple of days later,” Berkland said. “That means we went deep in the playoffs and making a state championship run, which is exciting. That’s your goal at the beginning of the season no matter what sport. That is always a good sign for me. If it means not having a couple of weeks off between sports, I’ll take it.”

Not having a high school baseball season his sophomore year did not prevent Berkland from giving an early verbal commitment to the Gophers.

“I built a really good relationship with the U of M coaching staff,” he said. “At a young age I knew I wanted to go play college baseball.”

Berkland’s size — 5-11 and 185 pounds— also played a big role in the decision. He will play wherever needed for the Trojans’ baseball team, but his primary position in the future will be catcher. He is a strong safety in football and guard in basketball.

“Given my strengths, weaknesses and size and everything else, that is where I saw myself projecting.” Berkland said. “I absolutely love basketball and football, too. Baseball is the right fit for me.”

The Trojans, who won their only baseball championship in 2016, opened the season ranked No. 9 in Class 4A by the Minnesota State High School League Baseball Coaches Association. The opened the season with four consecutive victories.

“We have a solid squad,” Berkland said. “We have a deep pitching staff and some good bats to go with it.”

That assessment gives him plenty of optimism for winning that third state championship.

“I’m really confident in what we can do,” Berkland said. “I always try to win no matter what I’m competing in. I’m a fiery competitor.”