Three Cadet pitchers combined for seven innings of one-hit baseball in a rematch of the 2019 Class 3A state championship game. 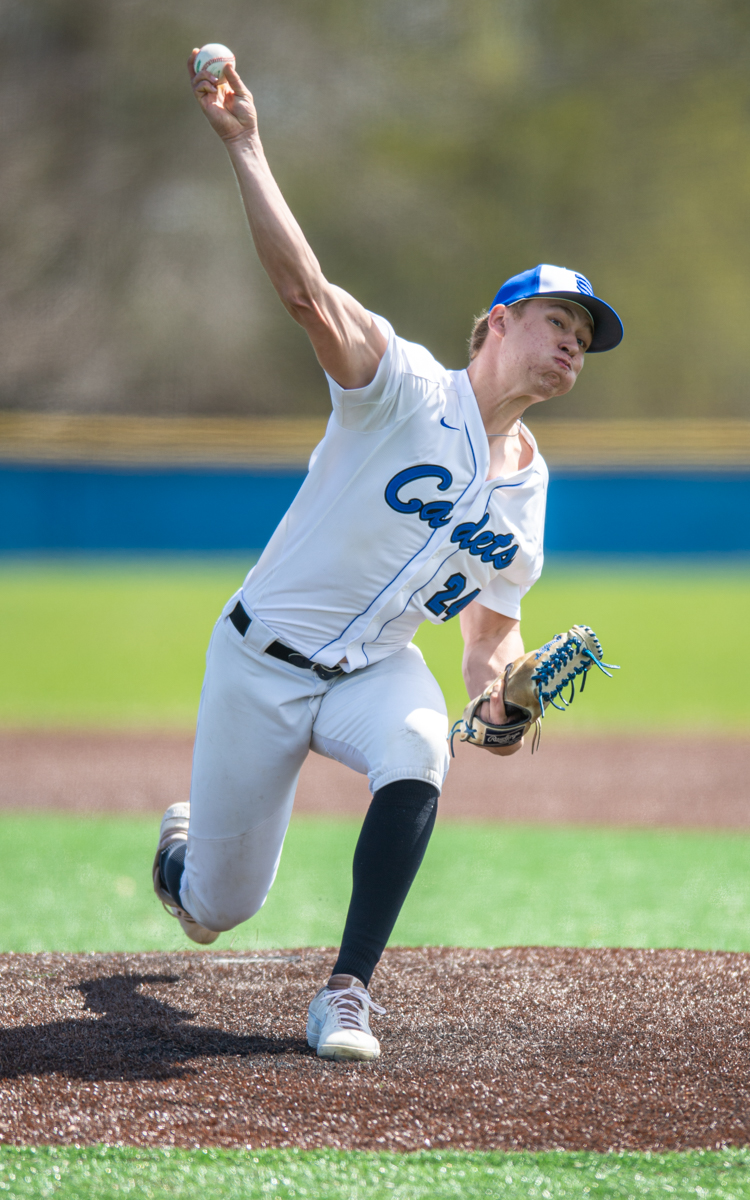 Based on the last time they met, St. Thomas Academy and Benilde-St. Margaret’s are the cream of the crop in Class 3A. The Cadets defeated the Red Knights in that matchup 1-0 to claim the 2019 state championship.

But that was nearly two years ago. The COVID-19 pandemic led to the cancelation of the entire 2020 season statewide, disallowing the Cadets from taking their season-long victory lap.

The rosters from both teams have had a lot of turnover since that championship finale at Target Field, but what remained the same on Saturday afternoon was St. Thomas Academy blanking Benilde-St. Margaret’s, as the Cadets rolled to a 6-0 victory in Mendota Heights.

It was the first victory for head coach Jon Engeswick. He replaced Matt Kelly, who is now an assistant coach at the University of North Carolina Asheville. Engeswick inherited a roster stuffed with upperclassmen, but they’re far from experienced.

“The big thing is we’ve got 15 seniors. Of those 15, 13 had not played in a varsity game" Engeswick said. “They didn’t have a season last year so we didn’t know what we’ve got. The first game, two days ago against Tartan, they were super nervous. Today, against a really good opponent like Benilde, they came out just nice and relaxed and did what they could. I think each guy kind of picked up each other.” 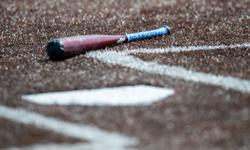 Benilde-St. Margaret’s coach Andy Judkins noted the Red Knights, who are ranked No. 3 in the Class 3A coaches’ poll, already have three injuries in the lineup, including in the No. 3 and 4 slots in the order, and two spots in the pitching rotation.

The offense for Benilde-St. Margaret’s (1-1, 1-0) was firing in a 9-1 win Thursday at Robbinsdale Cooper, but the Red Knights were hitless Saturday until pinch hitter Will Feyereisn lined a one-out single in the sixth inning to right field for the team’s only base knock.

The damage was already done at that point. The No. 2-3A Cadets plated an unearned run in the first inning against Red Knights starting pitcher Matthew Evans. They scored two more an inning later, highlighted by a Max Bordelon triple that preceded a RBI groundout by Jacob Zenner and RBI single by Joe Middleton.

That was all the padding St. Thomas Academy pitcher Liam Brennan needed. He struck out seven batters and overcame four walks to go three scoreless innings.

He’s part of a fresh set of faces eager to prove they can compete like their predecessors.

Command of his fastball was an issue for Brennan on Saturday, like it can be for many prep pitchers in April. The movement on his pitches, however, seemed to be in midseason form.

“My slider was working really well,” the righthander said. “Couldn’t really spot up my fastball most of the game, so I just relied on my slider and no one was hitting that so I just kept throwing that the entire game.”

Reliever Charlie Steel was just as effective in relief for St. Thomas Academy (1-1, 0-1) with three scoreless innings, followed by Mike Miller retiring the side in order to close out Saturday’s nonconference matchup.

The game was broken open in the fifth inning. A leadoff double by Jordan Young sparked a three-run frame highlighted by a RBI single by Tristin Thilmany. Reliever Owen Plourde appeared to be out of the inning for Benilde-St. Margaret’s, but an error on a routine grounder to the second baseman allowed two more Cadets to come home to score with two outs.

“Both [pitchers] mixed speeds well, throwing strikes,” Judkins said. “The biggest thing is competing, and I thought we did that. A throw here, a throw there, and it’s probably not 6-0. It might be 3-0. You never know.”

Brennan noticed plenty of guys putting in extra work in the offseason to prepare for the long-awaited 2021 campaign. He said the Cadets have set their hopes high to try to have their own time in the sun at Target Field. Engeswick is there to rein in the team, both from keeping expectations too high as well as to remind them to soak in each and every moment.

“Every day, expect it to be the last time you’re out here, so enjoy it,” Engeswick told his team. “The needle can be ripped off the record at any point in time. They’ve really bought into coming together and realize we’re not focusing on anytime in May. We’re just focusing on the next day.” 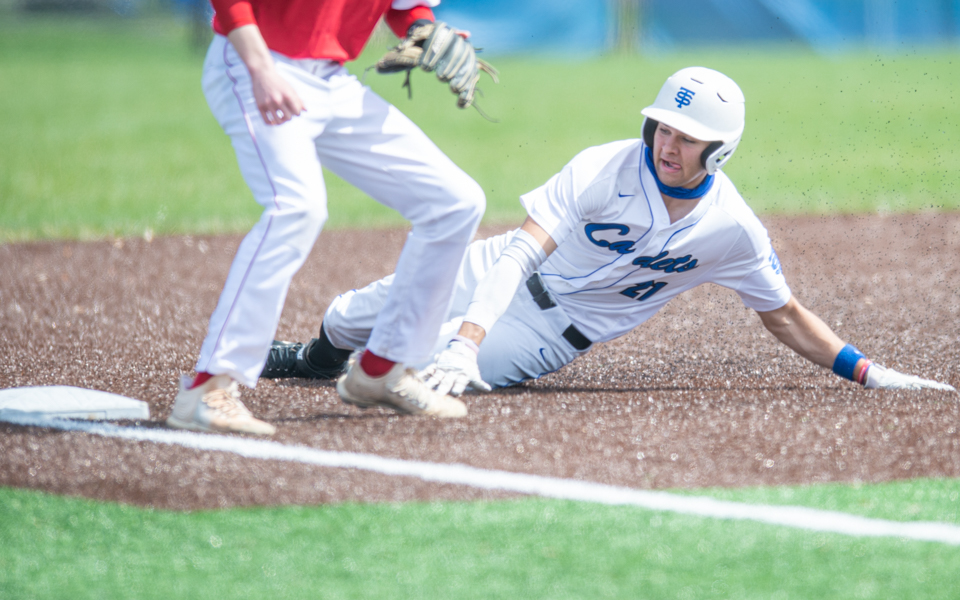 The Cadets' Angelo Pacyga slides safe into third base Saturday afternoon during St. Thomas Academy's 6-0 defeat of Benilde-St. Margaret's in a rematch of the 2019 Class 3A state title game. Photo by Earl J. Ebensteiner SportsEngine

In a rematch of the 2019 Class 3A state title game, it was St. Thomas Academy that came out with a win once again against Benilde-St. Margaret’s. St. Thomas Academy held the Red Knights without a hit until the sixth inning in Mendota Heights on Saturday afternoon and went on to win 6-0.

Pitcher Liam Brennan started for St. Thomas Academy, ranked No. 2 in the Class 3A coaches’ poll. He struck out seven batters and walked four in three innings of work.

Brennan got run support right away, as the Cadets scored an unearned run in the first inning and they plated another two runs an inning later. Jacob Zenner’s groundout drove in Max Bordelon, who tripled. Joe Middleton followed with a single to score Jordan Young.

Young and Bordelon had the game’s only multi-hit efforts. Young went 2-for-2 with a double, a walk and two runs scored from the No. 9 spot in the lineup.

The Cadets’ Charlie Steel picked up where Brennan left off on the mound, retiring the side in the fourth and fifth innings. He surrendered the No. 3-3A Red Knights’ first hit of the game with one out on a liner to right field by Will Feyereisn.

Steel went three innings with one hit, no walks allowed and two strikeouts. Mike Miller pitched a 1-2-3 inning in the seventh for St. Thomas Academy (1-1, 0-1). 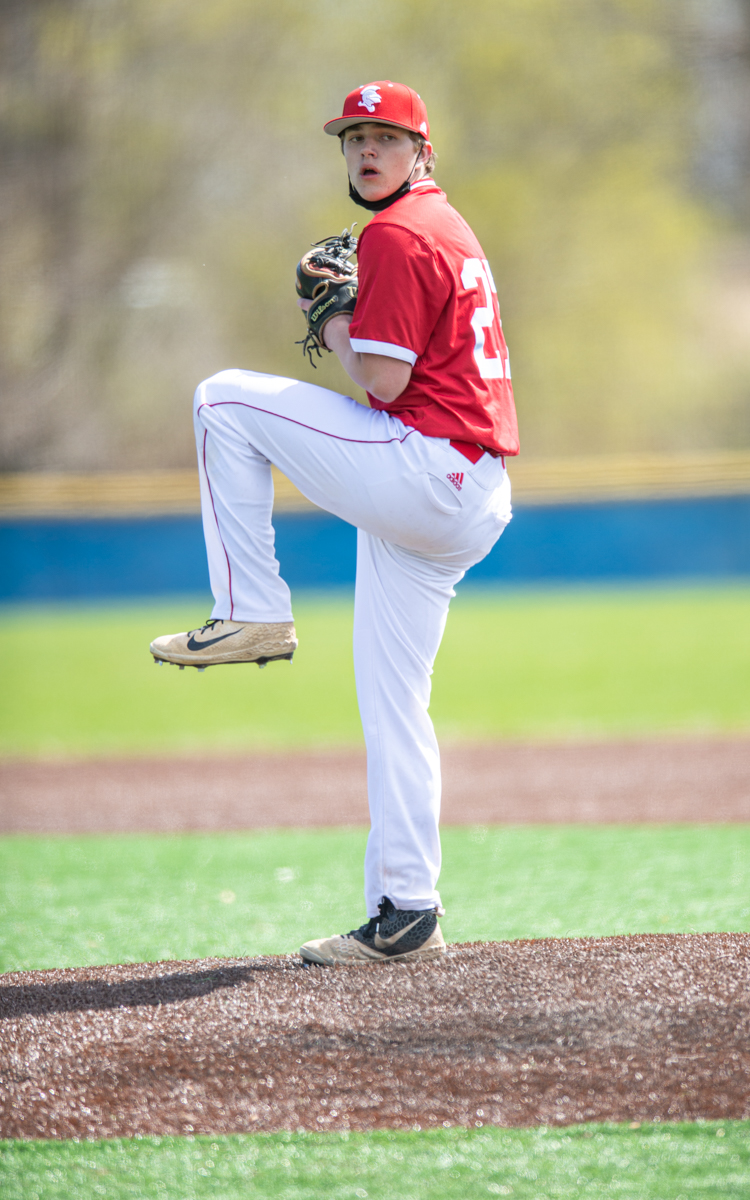