We identified players that we think had the biggest breakout performances from the 2019 season in softball, baseball, and girls' and boys' lacrosse. Help us determine which was most impressive by voting in the poll. 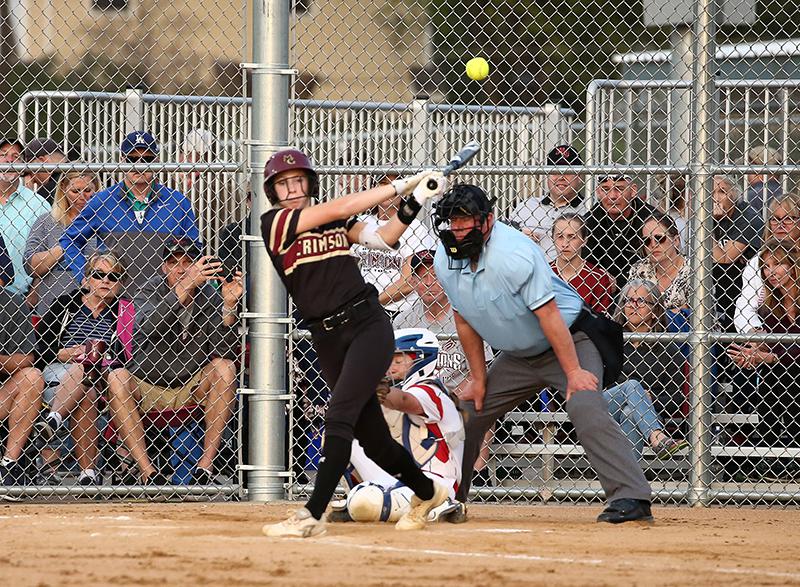 Ava Dueck of Maple Grove (pictured hitting a home run) was already a very good pitcher in 2018, but it wasn't until her senior year when she started hitting for power, as she blasted a state-best 16 homers. Photo by Cheryl A. Myers, SportsEngine

We're nearing the finish line of the 2019-20 school year, but we're still having fun which means we've got yet another article in a series of retrospectives the Hubs are producing to help fill the void left by the cancellation of the high school spring sports season.

This week we present an interactive look at our choices for most significant individual breakout performance from the 2019 spring sports season.

We chose one player from each of the sports we'd normally cover during the spring season and provided in-depth analysis to explain our less-than-scientific reasoning.

Have fun reading about the athletes we've chosen to highlight, and then vote for who you think had the most significant breakout performance in the poll below, where we've also included an option for "Other." It's there for you to check if you think there's another player who ought to get some attention, and to further your argument, please opine in the comments section below.

A reminder of our one ground rule: Keep it civil! We don't mind if you disagree with our selections, or those of other posters, but we will mind if your comments are inappropriate. A good policy to follow: Don't type it in the comments if you don't want your loved ones to read it.

Ava Dueck puts Maple Grove softball on her back

Ava Dueck of Maple Grove was the complete package last spring. The senior hit for power, she was exceptional from the mound, and she was essential in guiding the Crimson to the Class 4A state title.

Dueck had already been a very good pitcher in 2018, but it’s her uncanny production from the plate last year that makes her a worthy candidate for breakout performer.

She was equally successful from the circle, striking out 221 batters and posting a 0.88 ERA in 151 innings. With a 20-2 overall record a season ago, the first team all-state honoree surrendered just one home run and 19 earned runs.

The pop in Dueck’s bat didn’t arrive until her senior year, as she belted just two home runs and had 21 RBIs while hitting .388 in 2018. Her pitching career was already taking off, however, as she tossed 110 innings, with 138 strikeouts and a 2.35 ERA that season. Though, as a senior, her pitching became elite, as she gave up 18 fewer earned runs in spite of throwing 41 more innings.

Evan Shaw of Fridley had an above average junior season in 2018, but how he pitched last spring, mixing his fastball and a slow curveball to lead the state in strikeouts, took him to a whole new level as a breakout performer.

His improved command and pitch selection last spring led to him throwing 15 more innings than the year prior, he surrendered fewer walks, and he saw his ERA drop significantly while his strikeout tally rocketed by more than 100%.

A 6-foot-3 lefthander with excellent control, Shaw posted an 8-1 overall record for the Tigers a season ago, throwing 71 2/3 innings. He recorded a 0.68 ERA to go with eight walks and a blistering 119 strikeouts. He was also efficient offensively, hitting .373 with 12 RBIs and 14 stolen bases. For his production, he received second team all-metro honors from the Star Tribune, Class 3A all-state recognition, and he was chosen a Mr. Baseball finalist.

As a junior, Shaw had a 5-2 record with a 2.10 ERA in 56 2/3 innings thrown, which is quite good, but his 58 strikeouts and 11 walks that season pales in comparison to his production from last year. He also gave up 17 earned runs as a junior, compared to just seven his senior season. Shaw’s offensive production wasn’t quite as sharp in 2018 either, as he hit .312 with five RBIs and four stolen bases. 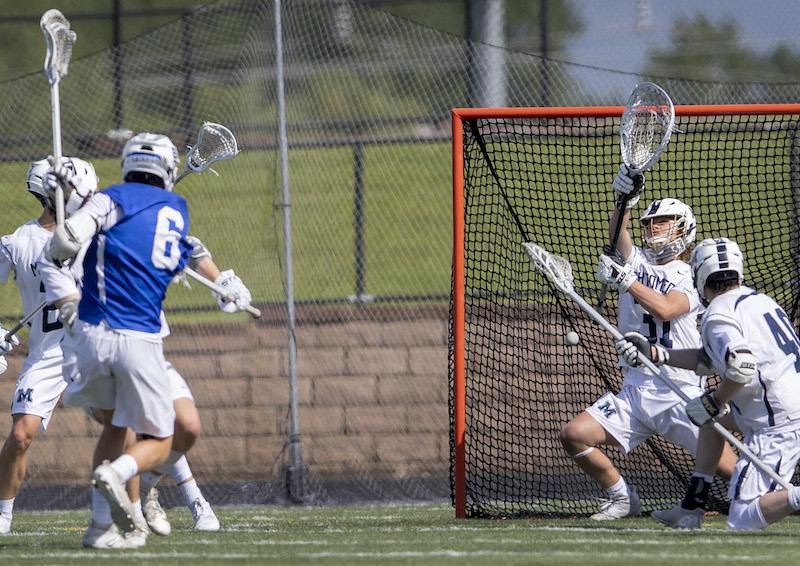 St. Thomas Academy's Baker Reding (6) scored the go-ahead goal in the fourth quarter. Reding's season was one of the breakout performances of the 2019 season. Photo by Carlos Gonzalez, Star Tribune

But his talents reached a new level as a sophomore, when he garnered a share of the spotlight with senior headliner Luke Williams to lead the Cadets to a brand new role: State tournament participant. The co-stars also helped garner rave reviews for a team that is considered one of the program's best after posting a 15-4 overall record.

Reding, a South Carolina transplant who first made St. Thomas Academy’s varsity as an eighth-grader, teamed with Williams to give the Cadets a one-two offensive punch that not only pummeled opponents in the regular season but also the power to push past longtime nemeses in the postseason.

At 6-foot and 175 pounds, Reding used his size and deft stick skills to tally 41 goals, 27 assists and 20 ground balls on the season. The right-handed midfielder had 33 goals, 57 points and 11 ground balls in the regular season, where he trailed only Williams in goals (52), points (66) and ground balls (26). Reding posted seven-point performances three times in the regular season, including an all-around impressive outing in an 18-0 victory over league foe Henry Sibley as he had four goals and three assists.

That production kept St. Thomas Academy undefeated through the season’s first nine games, a streak that included a 10-7 victory over Metro East Conference juggernaut Mahtomedi — the Cadets’ first victory over the Zephyrs since the MN Lacrosse Hub started keeping stats. Reding finished the game with two goals and two assists.

St. Thomas Academy had its winning streak snapped with a 16-7 loss to undefeated Stillwater, a game in which Reding had two goals and an assist. No matter, the Cadets never lost ground in the chase for the Metro East title, and four days later, they captured their first league title in the last 10 years following a 15-3 rout of Hastings. Reding turned in another big-time performance with three goals and three assists to help St. Thomas to a 7-0 league record.

A two-time captain for a Cadets football team that made back-to-back Class 5A Prep Bowl appearances, Reding used his postseason experience to guide St. Thomas Academy lacrosse to victories over Eagan (12-6 in a semi) and East Ridge (10-5 in the final) in the Section 5 tournament. The Wildcats had dashed the Cadets’ postseason dreams in 2016 and 2017, while the Raptors were the roadblock in 2018.

A matchup with fourth-seeded Mahtomedi awaited fifth-seeded St. Thomas Academy in the state quarterfinals, and thanks to two goals from Reding, the Cadets topped the Zephyrs 11-8 and advanced to meet another rival in the semis: top-seeded Benilde-St. Margaret’s. The Red Knights kept Reding from registering a point in the game, however, and won 10-3.

No-duh moments are those times in which correct decisions or answers are so obvious, and the selection of Lakeville South’s Emily Moes for the girls’ lacrosse breakout performance may be the no-duhiest choice ever!

The midfielder not only led the Cougars in goals (53), points (61), ground balls (24) and faceoffs won (73), but also helped significantly turn the team's fortunes completely upside down ... and she did so while not even attending the school she represented on the field! (She was an eighth-grader attending McGuire Middle School in the Lakeville School District.)

Moes is a talented athlete who had success in club lacrosse and as an outside hitter with her club and high school volleyball teams, so it’s no surprise the 5-11 right-hander made an immediate impact in her first year with the varsity lacrosse team, scoring three goals in Lakeville South's 17-2 victory over Owatonna in the season opener.

It was the first of 12 consecutive regular-season games in which she tallied multiple points — a streak highlighted by an outing against South Suburban Conference foe Farmington that ended with her recording 11 points (8 goals, 3 assists), three ground balls and winning 13 faceoffs.

With Moes motoring along and registering points at an Indy-car pace, the Cougars became contenders in the South Suburban, where only losses in back-to-back games against Prior Lake (13-3 on May 16) and intra-rival Lakeville North (21-11 on May 14) kept Lakeville South from taking the checkered flag. The Cougars crossed the finish line in third place with a league record of 7-2 and ended the year with a 13-3 overall mark — a massive improvement for a team that went 3-6 in conference play and 7-9 overall just the year before.

In a regular-season showdown with Breck on May 20, Moes scored five goals to help Lakeville South record an 11-10 upset of the Mustangs — a team that reached the state tournament and finished the year ranked No. 6 in the final coaches' poll. She and the Cougars carried that momentum into the Section 1 playoffs, where they were the No. 2 seed and rolled to the championship game in a rematch with top-seeded Lakeville North.

The Cougars fell to the Panthers 18-13, but make no mistake: Moes’ impressive opening salvo was a signal to the South Suburban — as well as the rest of the state — that this eighth-grader, who finished the year as the ninth-leading goal scorer in the state, certainly had a breakout season.