This week in Hubs history: Halvorsen hurls Heritage Christian past Providence Academy in 2018

May 18-23: Prior Lake boys' lacrosse knocked off Eagan to claim the South Suburban title in 2019; Delano softball bested Waconia behind a three-run fourth inning to cap regular season in 2018. 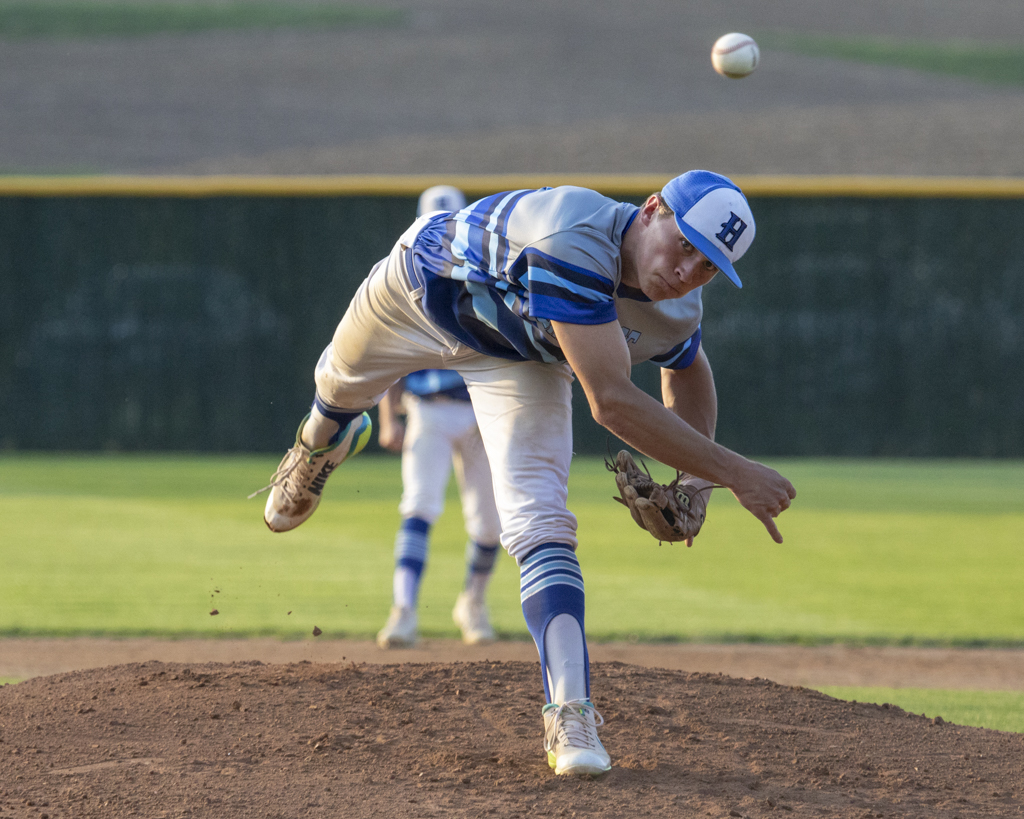 Seth Halvorsen had 12 strikeouts to lead Heritage Christian Academy past Providence Academy 4-1 on Friday, May 18, 2018. He was named Mr. Baseball later that season. Photo by Jeff Lawler, SportsEngine

A month before being crowned Mr. Baseball, Heritage Christian Academy's Seth Halvorsen was humming on the mound against Providence Academy. His arm, which fired fastballs over 90 miles per hour, garnered the attention of roughly 300 people at Arnold Klaers Field in Loretto on Friday, May 18, 2018.

Halvorsen, now a redshirt freshman at Missouri, left little for his defense to do in the Eagles' 4-1 victory. He struck out 12 while allowed just one run on two hits.

“Sometimes there’s games where there’s not a lot of balls that come to you, but it’s fun to watch him play — he’s outstanding,” said Jonny Flynn about playing shortstop behind Halvorsen.

Halvorsen, who always had the arm to intimidate opposing batters, learned to fine-tune his pitching skills and add pitches to his repertoire later in his high school career.

That fine tuning paid off. In the 2018 Class A state championship game, Halvorsen struck out 16 batters and became the first high schooler to hit two home runs in Target Field. He could soon be playing there again, this time as a major leaguer, as the Minnesota Twins selected Halvorsen in the 30th round of the 2018 draft.

2018: The Tigers end a two-game losing streak with timely hitting

Scoring had become an issue for Delano entering its regular-season finale with Waconia on May 18, 2018, and it looked as if the Tigers' trouble tallying runs may be factor in the showdown with their longtime Wright County Conference rival.

Delano had scored just one run in its last two games prior to meeting Waconia, and as a result, the Tigers had lost back-to-back games for the first time all season. Their scoreless streak had reached 12 innings after failing to plate a run in the first three innings against the Wildcats, leaving then-Delano coach Jim VanCura with one solution.

“Prior to this week, we had been hitting the ball all over the place,” VanCura said. “We needed to get back into a rhythm and do whatever we could to get back to what we were doing earlier this season.”

So, when the Tigers loaded the bases in the bottom of the fourth, they were willing to try any way possible to score...even play small ball.

Delano's Claudia Schuler put down a bunt that allowed Abby Morris to score. The drought was finally over, but the game still hung in the balance, and VanCura was not about to mess with a good thing. Delano executed another bunt single to grab a 2-1 lead.

Those runs proved to be the difference as the Tigers recorded a 3-1 victory at Delano High School, their second win over the Wildcats that season.

The victory helped Delano secure second place in the Wright County Conference East Division standings, where the Tigers finished ahead of Waconia and Orono — the teams that tied for third.

The final order, however, didn't help predict the outcome for Delano in the Class 3A, Section 6 playoffs. The Tigers, who had two losses to the Spartans in the regular season, ended their season with another defeat to Orono, this time in a 5-4, eight-inning heartbreaker.

2019: Jung leads Prior Lake to a conference-clinching victory at Eagan

Prior Lake boys' lacrosse began 2019 as the defending state champion, and the program also won a state title in 2016, but for all that success, the Lakers still hadn't secured a South Suburban Conference title since 2015.

That changed on May 21, 2019 when — in a downpour — the Lakers defeated Eagan 11-7 on the road to clinch the South Suburban crown.

“Today it’s a little hard to celebrate, but we’ll definitely celebrate later this week,” said Benjamin Jung, who led the Lakers with four goals. “We’re pretty cold right now, but this is huge for us and will set us up for section playoffs.”

After helping his team secure its first league title in four years, Jung said his attention was on playing in another state tournament.

“I can always use more rings, the more I can get on my hand is always better,” Jung said. “State is just a once-in-a-lifetime feeling. I’ve had the opportunity to play there three times now. I’d just like to give the newer upcoming boys a chance to get there.”

The conditions Tuesday didn’t favor either side. Rain, wind and mud were all factors. It looked like both teams were going to find difficulty creating offense, but Prior Lake stepped up to the challenge behind the play of Jung, whose scoring came in the game’s first three quarters.

“(Jung’s) one of those guys you see work hard and see what he does, and you want to follow him and play hard for someone like that,” Prior Lake coach Casey Mithun said. “You can see he’s leaving it all out there.”

Jung's work ethic and determination also helped him leave his high school career with a second ring. He not only helped Prior Lake reach back-to-back state title games, but his goal in the first quarter was key for a Lakers' team that once again edged out Benilde-St. Margaret's to bring home hardware for the second consecutive year.