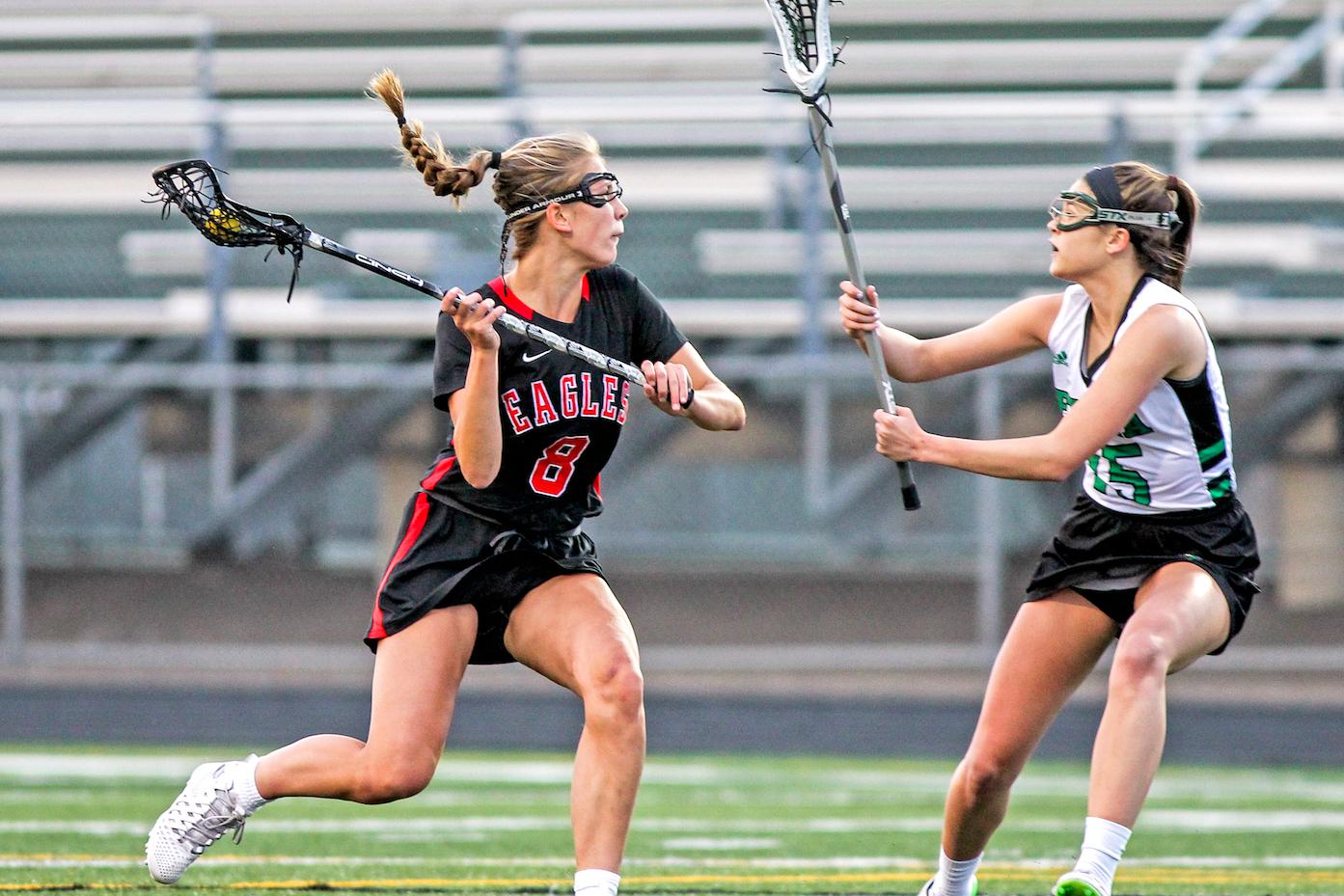 Eden Prairie sophomore Brooke Lewis takes a shot during the Eagles' 17-5 victory at Edina on May 4, 2017. The Eagles went on to win the 2017 state championship. Photo by Mark Hvidsten, SportsEngine

Brooke Lewis was held out of Eden Prairie's first two games of the 2017 season as the then-sophomore forward battled an illness.

Resting was difficult for Lewis, who tallied 68 points as a freshman and had been a marquee player for the program since scoring the game-winning goal in overtime against Stillwater in the 2015 state semifinals as an eighth-grader — a victory that led Eden Prairie to its first championship since 2009.

The coaching staff eased Lewis into the starting rotation and it seemed as if the wait was worthwhile.

Eager to prove herself, Lewis led the Eagles with seven total points (3 goals, 4 assists) and didn’t miss a single minute of Eden Prairie’s 17-5 romping of Lake Conference rival Edina on May 4 at Kuhlman Stadium.

Eden Prairie standout Naomi Rogge also played a heavy role in the first half, where she tallied five of her game-high six goals to help the Eagles run out to a 12-2 lead.

Rogge was named 2017 Ms. Lacrosse and the Eagles finished the regular season 12-1 — its only loss coming to Loyola Academy of Illinois, the nation's top-ranked team at the time.

Eden Prairie went on to win its third straight state title in 2017 behind the play of Lewis, who led the team with 17 points in the state tournament.

McKenzie Paap’s commitment to play softball at Minnesota State Mankato may have been the highlight of her senior year at Minnetonka, but she accomplished a new personal feat May 8, 2015 against Hopkins that might have been the best memory of her Skippers' career.

With Minnetonka’s bats warming up and the bases loaded in the bottom of the fifth inning, Paap stepped to home plate and spent little time in the batter’s box preparing to hit. She focused keenly on the first offering from Royals starting pitcher Lauren Feagler and swung with determination, lifting the ball deep into the outfield.

“It came off the bat and halfway down the (baseline) I was screaming, ‘Get out of here!’ ” she said.

The shot cleared the outfield fence and the bases. It may have also catapulted right to the top of Paap’s list of high school highlights. It was her first career grand slam and capped a six-run inning for the Skippers, helping them coast to a 9-3 victory over Lake Conference rival Hopkins on Senior Night at Minnetonka High School.

“My heart is still beating fast,” Paap said about the home run after the game.

The victory was one of four in league play for the Skippers, who finished third in the Lake standings behind Hopkins and Eden Prairie.

Paap ended her career at Minnesota State Mankato playing in 232 games and owning a .405 batting average.

In 2018, Austin had a lineup that knew it would get hits. What the Packers did not know is when those hits would come.

At Big 9 Conference rival Northfield on May 5, Austin started piecing things together in the seventh inning, but it was enough to help the Packers break up a Raider no-hitter and wrap up a 3-1 victory.

Austin went hitless for the first six innings and finished with just two hits in the game, including a triple by Riley Wempner that he lashed to the fence in the top of the seventh to score two runs and put the Packers ahead 3-1.

“Everyone in the lineup knows we can hit,” Wempner said. “It’s just a matter of getting dialed in and having good at-bats.”

Northfield starter Derek Albers threw 6 ⅓ innings, six of those were no-hit ball. He walked four and struck out three, but the Raiders offense struggled to get runners across the plate and finished the game stranding six runners in scoring position.

“Hard way to lose,” Raiders coach Mark Auge said. “(Albers) pitched a great game, kept us in it, gave us lots of opportunities to take the lead and we didn’t capitalize. They finally got to him at the end.”

The Austin lineup helped lead the team to a third-place finish in the Big 9 standings and propelled the Packers to the Class 3A, Section 1 title game against Red Wing. Austin's bats helped produced runs against the Wingers but came up just one short as the Packers ended their season with a 6-5 loss.