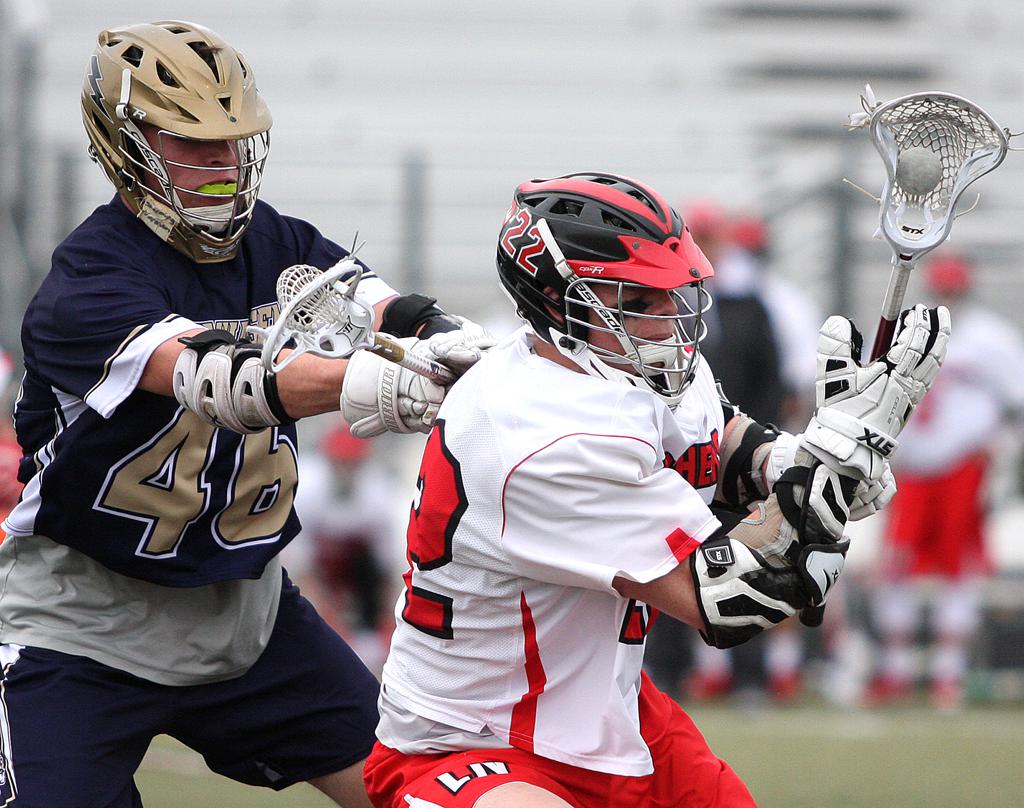 Sophomore Brent Hauck is key in helping the Panthers hand the Storm their first loss of the year.

Lakeville North sophomore Brent Hauck was tasked with defending Jadon Kerry, the Storm’s sophomore midfielder who was committed to play at perennial NCAA power Duke after high school, when the the teams met in a nonconference clash on Saturday, April 30, 2016.

Hauck held Kerry to just one goal in the 7-4 win, and  earned the right to remind Kerry of that fact when the two meet for their summer team’s practices.

“From this game to the club team, you’ve always got to chirp each other,” Hauck, a U.S. Military Academy commit, said with a laugh.

Attackers Cole Grindberg and Connor Clark and midfielders Jadon Kerry and Sam Shifflett scored one goal apiece for the Storm.

The victory was one of 16 Lakeville North posted on the season, which concluded with another trip to the state tournament for the perennial power — the team's third in its current string of six straight bids.

The Panthers were seeded No. 1 in the Section 1 and state tournaments, and reached the state title game, where they lost to Prior Lake 12-5. The game was a rematch of a regular-season showdown won by Lakeville North 9-6.

Eastview pitcher Kerrigan Hoshaw won her eighth game of the 2015 season on April 29 with another strong pitching performance. Hoshaw struck out nine batters in throwing a complete game to lead Eastview to a 7-0 victory over South Suburban Conference rival Lakeville North at Lakeville North High School.

Keeping her feelings locked away has served Hoshaw well, and if her recent run on the diamond is any indication, criminals should fear facing this future criminologist.

While the right-hander may not be flashy on the field, she plans to one day capture criminals — possibly with the help of the flashing lights on a law enforcement vehicle.

Hoshaw planned to attend University of Sioux Falls (S.D.) and pursue a degree that can help her become an FBI agent.

Until then, she’ll continue being the strong arm for the Lightning.

Hoshaw also registered one RBI and had one of her team's 13 hits as the Lightning ran their winning streak to four games.

Chloe Saholt, Hailey Forshee and Shayla Steinley each had a hit for Lakeville North.

Hoshaw finished the regular season with 122 strikeouts and continued solving batters throughout the playoffs to finish the year with 174 strikeouts, including 10 in the Class 3A state championship game. Her performance helped the Lightning edge Anoka 2-1 and bring home their second state title.

Josh Falk got a little help from above with his home run that helped Minnetonka rally to defeat Wayzata 4-2 on April 30, 2014.

The Skippers first basemen came to the plate in the sixth inning with two outs and a runner on third, and the idea of a home run was nowhere to be found in Falk’s mind. But then the unthinkable happened.

Falk connected on a pitch from Wayzata's Nick Olmanson. It looked as though Falk got his bat underneath the ball and it was going to be a routine fly out for Trojans left fielder Jack Sorensen, but the ball drifted with the wind.

Falk said natural forces, besides his massive arms, helped the ball over the fence — his second home run of the season.

“I was just looking for contact and getting the run in,” Falk said.

“A lot of wind," he added. "The baseball gods were looking out for me today.”

Falk's hit was his only one of the game, but it was part of a three-run sixth inning that erased a 2-1 deficit for Minnetonka.

He hit two more homers in the postseason, but Minnetonka couldn't make a return trip to state, ending its season with a 5-4 loss to New Prague in the Class 3A, Section 2 tournament.