A bevy of talent concentrated in the east and west metro suburbs of the Twin Cities makes league games from two conferences in particular must-watch baseball this season. 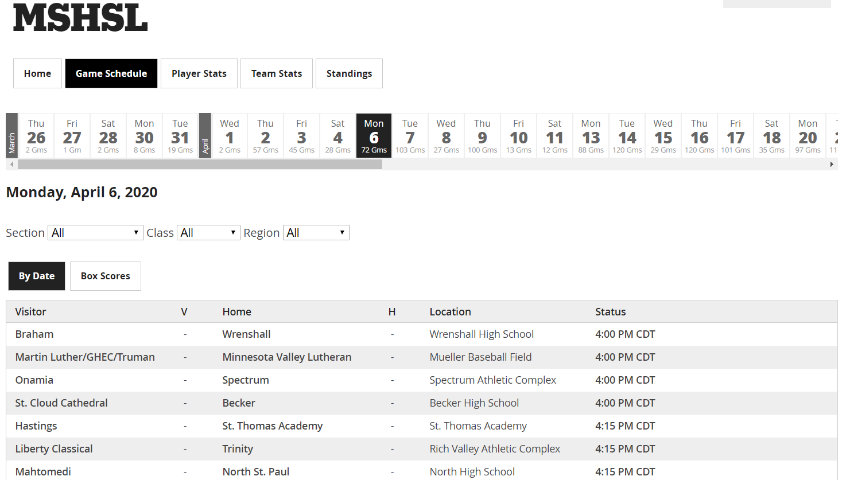 Click the image above to view the entire season schedule.

If there’s one thing the spring high school sports season has taught us the last few years it’s that scheduling can be very fluid.

While weather conditions have been favorable for games to be played sooner rather than later this March, a new challenge has arrived in the form of COVID-19, and how schools and the Minnesota State High School League are choosing to react with respect to planning the spring sports season seems to be a process that's still in development.

For now, the spring sports season is still scheduled but games cannot be played until at least April 6. Assuming we’re good to play ball from there, there’s a lot of dynamic matchups that should make for an exciting baseball season.

The Suburban East and Lake conferences will be big-school leagues to watch out of the gate, as seven of the top-10 teams in the Class 4A preseason coaches' poll are from the two conferences.

Mounds View, ranked No. 1 in Class 4A, faces a daunting slate of Suburban East matchups midseason, which should help the Mustangs prep for a third straight state tournament appearance. Mounds View will duel No. 4-4A Stillwater, which won the Class 4A state championship in 2018, on April 29, and then grapple with rivals No. 3-4A East Ridge on May 8 and No. 8-4A Woodbury on May 11. The Raptors, who won the state title a year ago, eliminated Mounds View in last year’s tourney so the Mustangs’ matchup with East Ridge is likely circled on the calendar for importance.

Hopkins, which is tied with Stillwater for the No. 4 ranking in Class 4A, and No. 10-4A Wayzata finished tied atop the Lake standings a year ago and then met in the Class 4A, Section 6 finale where the Royals defeated the Trojans to advance to state. The rivals are scheduled to meet twice during the regular season, first on May 1 at Wayzata and then again for a late-season meeting in Hopkins on May 18.

St. Michael-Albertville won the Mississippi 8 Conference crown a season ago before moving with Buffalo to the Lake prior to this school year. The No. 2-4A Knights not only face a tough slate of league games this season, they’ve also got a doubleheader with No. 9-4A Moorhead scheduled for May 9.

Minnehaha Academy, which lost the Class 2A state championship game to Duluth Marshall a year ago, looks poised to be a strong program yet again as the No. 2-2A Redhawks look to qualify for their seventh state tournament in eight years. The Redhawks duel No. 6-2A St. Cloud Cathedral on May 9 in a postseason primer.

The state tournament is slated for June 11-13, with venues yet to be announced.

To view the entire schedule, click here, or type the name of your favorite program into the “Team Finder” box at the top right corner of the page to locate a specific schedule.

If your team’s schedule needs updating, or isn’t posted, send the necessary information to scores@sportngin.com.