The senior pitcher and center fielder for the Ponies will continue his baseball career at Oregon State next year. 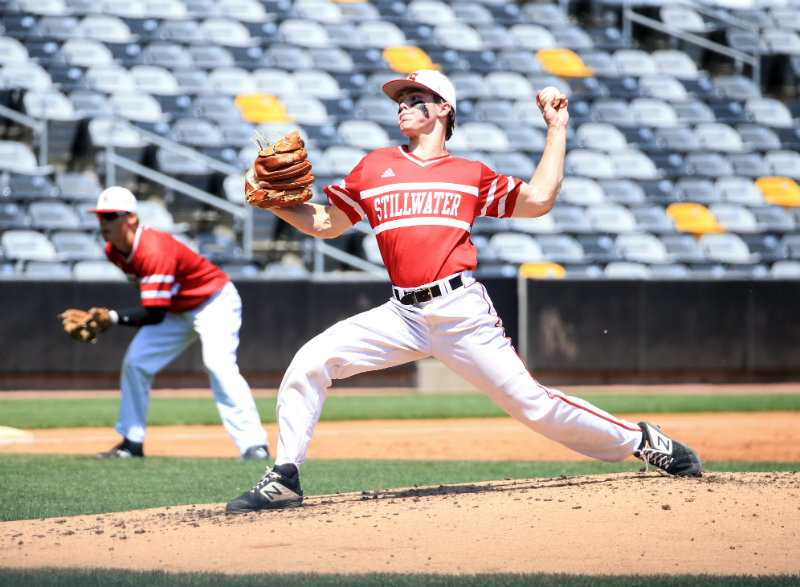 Drew Gilbert didn’t get a coveted second consecutive Class 4A crown with Stillwater this spring but he did receive one final piece of hardware to add to his trophy cabinet. On Sunday, the left-handed pitcher and center fielder for the Ponies was presented with the 2019 Mr. Baseball Award at a luncheon held at Target Field in downtown Minneapolis.

Gilbert, who has also received Star Tribune Metro Player of the Year and all-state honors this season, finished his senior campaign in the Class 4A semifinal round, where the top-seeded Ponies were upset 5-4 by Suburban East Conference rival East Ridge, which went on to win its first state championship. Stillwater won the Class 4A crown in 2018, when Gilbert pitched a complete game shutout to defeat Minnetonka 4-0.

From the mound this season, Gilbert threw 49 innings, surrendering 12 hits and one earned run. He finished the season with 97 strikeouts and a 0.18 ERA.

A 35th round pick chosen by the Minnesota Twins in the Major League Baseball draft earlier this month, the 5-foot-11 hurler has a fastball that reaches 96 mph, as well as a curveball and changeup. Gilbert's also a stout center fielder and he has some pop in his bat while being able to hit for average. Committed to playing for Oregon State next spring, Gilbert hit .370 this season with 16 RBIs and he stole eight bases.

Gilbert was one of seven finalists for this year’s Mr. Baseball Award, which is bestowed on the state’s top senior player, chosen by a panel of high school and college coaches, in addition to pro scouts. Criteria for receiving the award include season contributions, and athletic and character attributes.

The other finalists for this year’s Mr. Baseball Award were: Evan Shaw of Fridley; Adam Mazur of Woodbury; Will Anderson of St. Michael-Albertville; Ben Pedersen of Duluth Marshall; Trent Schoeberl of White Bear Lake; and Will Frisch of Stillwater, who will join his teammate Gilbert at Oregon State in the fall.

Gilbert will join 2019 Ms. Softball winner McKayla Armbruster in throwing out a first pitch at a Twins home game later this season.