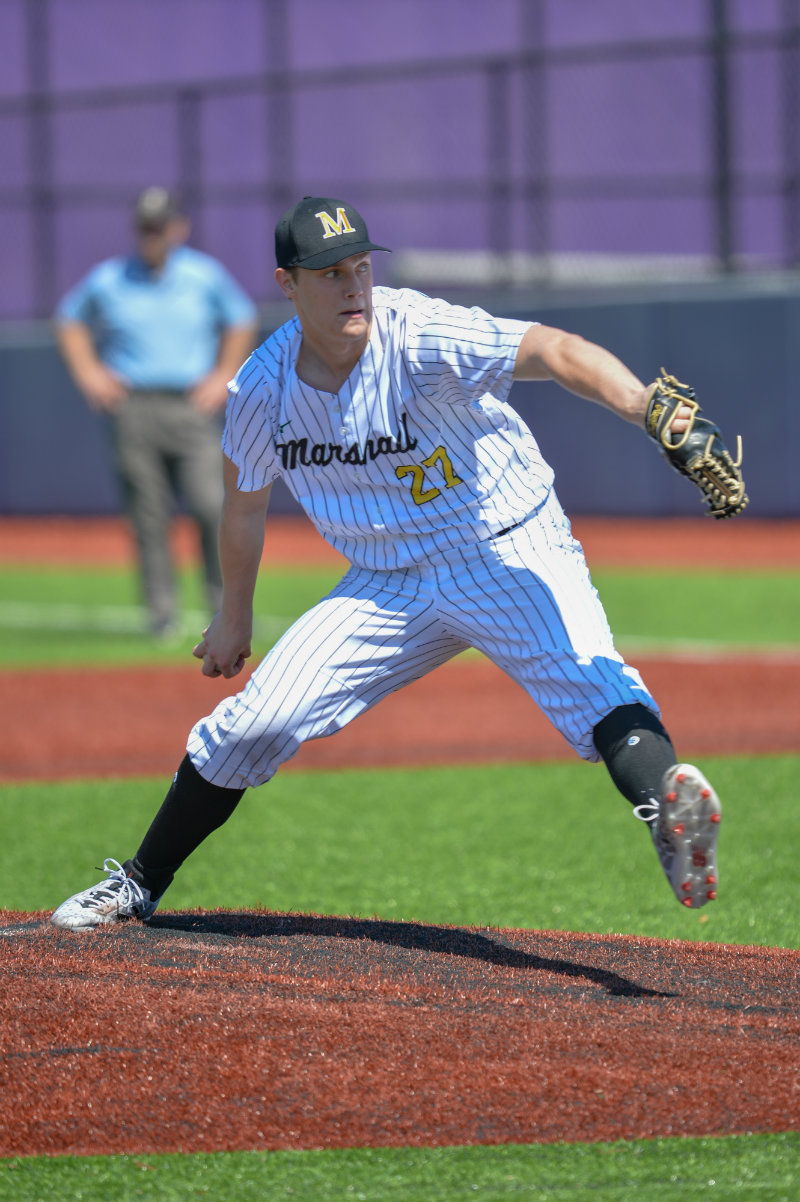 Duluth Marshall pitcher Ben Pedersen made this year's Class 2A all-tournament team in addition to winning a state title. He was one of three Hilltoppers to make the squad. Photo by Earl J. Ebensteiner, SportsEngine

Last Thursday four baseball teams became state champions in downtown Minneapolis and 48 players — 12 from each class — were honored for their standout performances during this year’s tournament.

Duluth Marshall, which won its first baseball state championship since 1950 with a 4-2 victory over Minnehaha Academy at Target Field on June 20 to claim this season’s Class 2A title, trailed 2-0 until the top of the sixth inning, when the Hilltoppers broke through to plate their first run of the game. In the top of the seventh, they scored three more runs en route to the victory.

A Missouri commit, Pedersen is a 6-foot-5 right-hander who was selected by the Baltimore Orioles in the 38th round of the MLB draft earlier this month. In the state championship game, Pedersen struck out nine batters, gave up five hits and allowed two runs in 6 1/3 innings thrown. He finished the tourney with a 2-0 record, 22 strikeouts and a 2.84 ERA in 12 1/3 innings.

Joining Pedersen from the Hilltoppers is catcher Carter Sullivan and outfielder Charlie Kleinschmidt. Sullivan went 4-for-10 from the plate during the tournament, scoring two runs and tallying three RBI. Kleinschmidt hit .333.

Despite losing to Duluth Marshall, Minnehaha Academy also had three players make the all-tourney team. The Redhawks, who have played in five of the last six Class 2A state tournaments, are represented by third baseman Bennett Theisen, shortstop Noah Dehne and second baseman Dylan Kiratli.

Players from the Suburban East Conference govern the Class 4A all-tournament team, with East Ridge, Stillwater and Mounds View combining for six of the 12 selections. East Ridge upset top-seed Stillwater 6-5 in the semifinal round, then knocked off New Prague 7-2, leading to the Raptors claiming their first state title in their first tournament appearance.

Minnesota Twins draftee Drew Gilbert also received honors. A senior left-handed pitcher and center fielder from Stillwater, Gilbert was chosen by the Twins in the 35th round. Gilbert, who will play for Oregon State next year, threw five innings against Eden Prairie in the quarterfinal round, striking out 10. He surrendered no hits or runs, and walked just one batter in the 11-0 win.

Presented by the Minnesota State High School League and Wells Fargo, the 2019 all-tournament teams were selected by a panel of coaches and media specialists attending the tourney.

Scroll through the tables below to see all the selections.