Held hitless for four innings, the Raptors exploded for five runs in the fifth en route to a 7-2 victory. 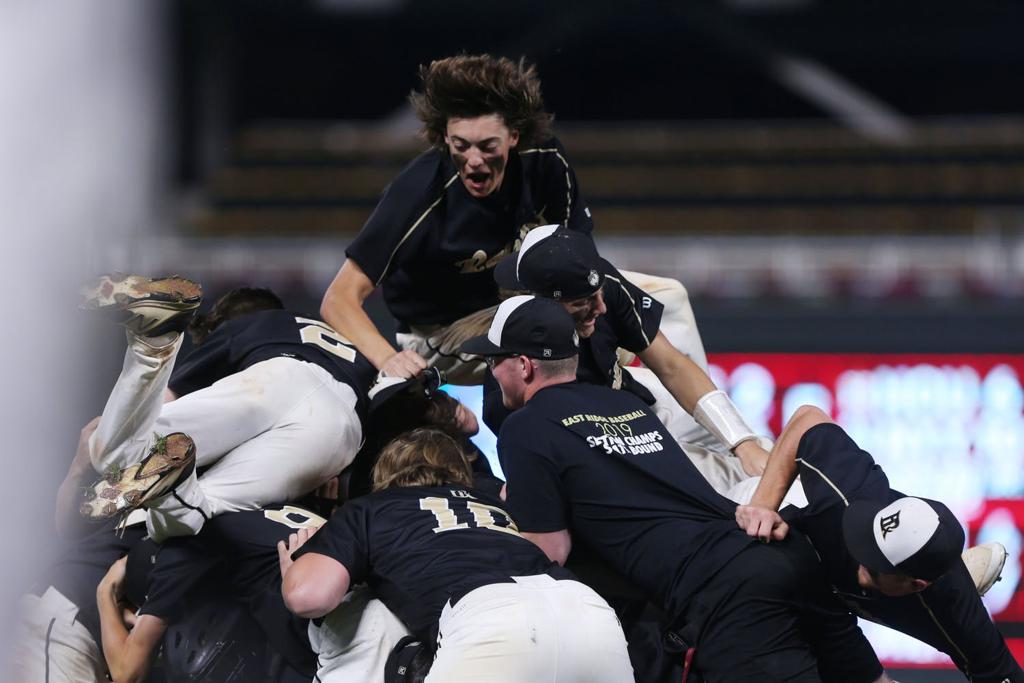 When Joe Trollen stepped to the plate in the fifth inning, he knew it was time.

Time for a base hit. Time for a rally. Time to make a statement.

East Ridge’s senior centerfielder lined a double into the gap in right center – the Raptors' first hit and first baserunner of the game – igniting an onslaught of five runs and six hits. What had been a one-run deficit became a comfortable lead en route to a 7-2 victory over New Prague on Thursday in the Class 4A championship game at Target Field.

The victory gave the Raptors, who trailed in all three of their state tournament games, their first baseball state title in the school's 10-year history.

“It really started everything,” said Trollen of his hit that opened the floodgates for the Raptors. “We just needed that one spark to get us going.”

The game started nearly 2 1/2 hours after it had been scheduled, due to a rain delay earlier in the day. That may have been why it took East Ridge a while to solve New Prague starter Luke Tupy, who was untouchable through the first 4 1/3 innings. Tupy retired the first 13 batters he faced, 10 of them by strikeout, before Trollen’s game-turning hit.

Photo gallery: Class 4A and 3A championships

“Luke kind of breezed for the first two times through the order,” New Prague coach Tanner Oakes said. “Then they made some adjustments and put the barrel on the ball. Credit to them.”

Said East Ridge coach Brian Sprout, “He was throwing strikes and we had to go up there, ready to attack. We did that.”

The Trojans broke through in the third inning thanks to the speed of centerfielder Collin Dorzinski. He singled with one out, stole second and scored on the play because of two throwing errors by East Ridge.

But East Ridge starter Ryan Thelen kept the Trojans to one run and three hits until his teammates were able to get the bats going.

“He’s a guy that’s got stuff. He’s got multiple pitches that I would call dirty,” Sprout said. “He was ready to go.”

The end of Tupy’s night came two batters later, when Cam Hunter singled to right, putting runners on first and third with two outs. An error on a ball hit to deep short by East Ridge’ shortstop Ben North resulted in the Raptors' fifth run of the inning.

East Ridge went into the fifth without having had a baserunner and left with a 5-1 lead.

New Prague (18-9) got a run back in the top of the sixth, but East Ridge answered with two more in the bottom of the inning for the final margin.

The Raptors finished fourth in the tough Suburban East Conference, but felt like that prepared them for their state tournament run.

“We knew we were as good as any team out there,” Trollen said. “This is amazing.” 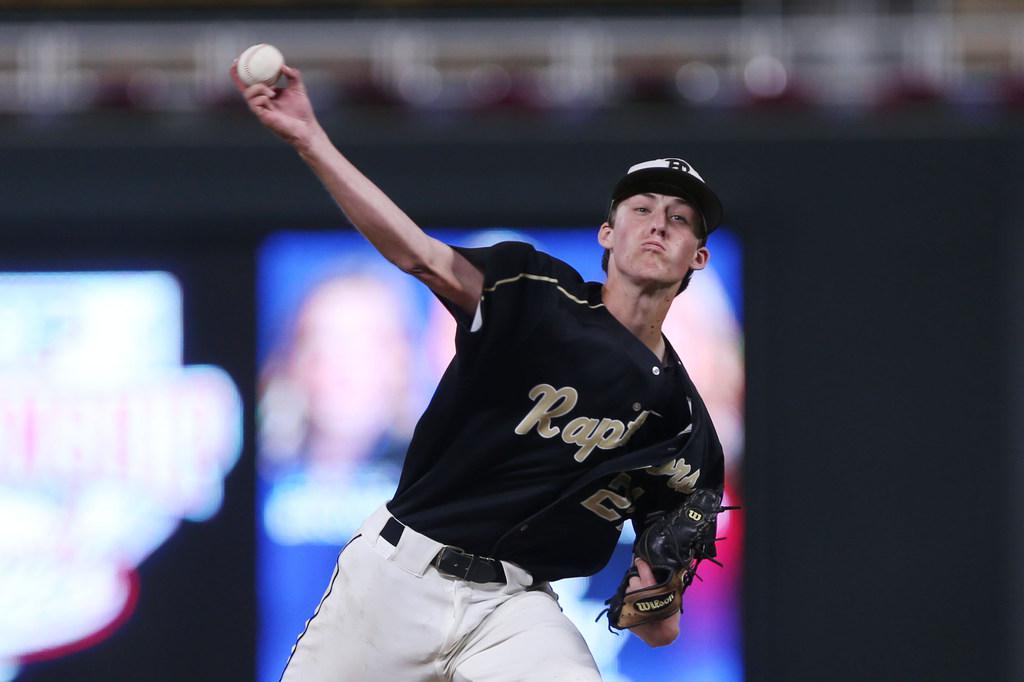 East Ridge pitcher Ryan Thelen kept his teammates in the game against New Prague until they erupted for five runs in the fifth inning en route to a 7-2 victory. Photo: NICOLE NERI • nicole.neri@startribune.com

As East Ridge has demonstrated all tournament, it doesn’t matter how or when the Raptors start. It’s about how they finish.

The Raptors waited more than two hours longer than expected to start their Class 4A championship game against New Prague on Thursday. And they didn’t have a baserunner until there was one out in the fifth inning,

East Ridge scored five runs on six hits in the fifth inning, turning a one-run deficit into a healthy lead, and pulled away for a 7-2 victory. The Raptors (21-6), making their first state appearance, trailed in all three of their tournament games.

Despite the lengthy wait to play, fans of both teams were in full voice, spunky from the outset. New Prague had a large contingent of noisy supporters down the third base line. The East Ridge faithful were fewer in number but no less vociferous, eager to match New Prague’s energy yell for yell.

New Prague scored first in the third inning thanks to the speed of centerfielder Collin Dorzinski. He singled with one out, stole second and headed to third when the throw from the catcher scooted into centerfield. The centerfielder's throw soared over third base and into the dugout, allowing Dorzinski to jog home with the game’s first run.

Meanwhile, Tupy, a junior lefthander, was busy mowing down the East Ridge batting order. He was perfect through the first 4 1/3 innings, retiring the first 13 batters he faced, striking out 10 of them.

To that point, East Ridge starter Ryan Thelen had been nearly as good. Other than New Prague's two hits and run in the third, Thelen kept the Trojans' offense under control, retiring seven consecutive batters after allowing the run.

Things turned quickly in East Ridge’s favor in the fifth. With one out, centerfielder Joe Trollen hit a double to the gap in right center, becoming the first baserunner allowed by Tupy. Tanner Stafne followed with a hard line-drive single to left and Carter Seidl tied the game 1-1 when his sinking liner eluded the glove of New Prague shortstop Jake Deutsch and went into centerfield, scoring Trollen from third.

Freshman Weber Neels stepped up and doubled over the head of Dorzinski, scoring Stafne and Seidl for a 3-1 lead. Anthony Lavelle kept the Raptors’ hit parade alive, roping a double just inside the left field line, driving in Neels.

The end of Tupy’s night came two batters later, when Cam Hunter singled to right, putting runners on first and third with two outs. An error on a ball hit to deep short by East Ridge’ shortstop Ben North resulted in the fifth run of the inning for East Ridge.

East Ridge went into the fifth without having had a baserunner and went out with five runs on six hits and an error and a 5-1 lead.

New Prague (18-9) got a run back in the top of the sixth, but East Ridge answered with two more in the bottom of the inning.