Trailing by one, the top-seeded Hilltoppers used four hits to score three runs for a 4-2 victory over Minnehaha Academy. 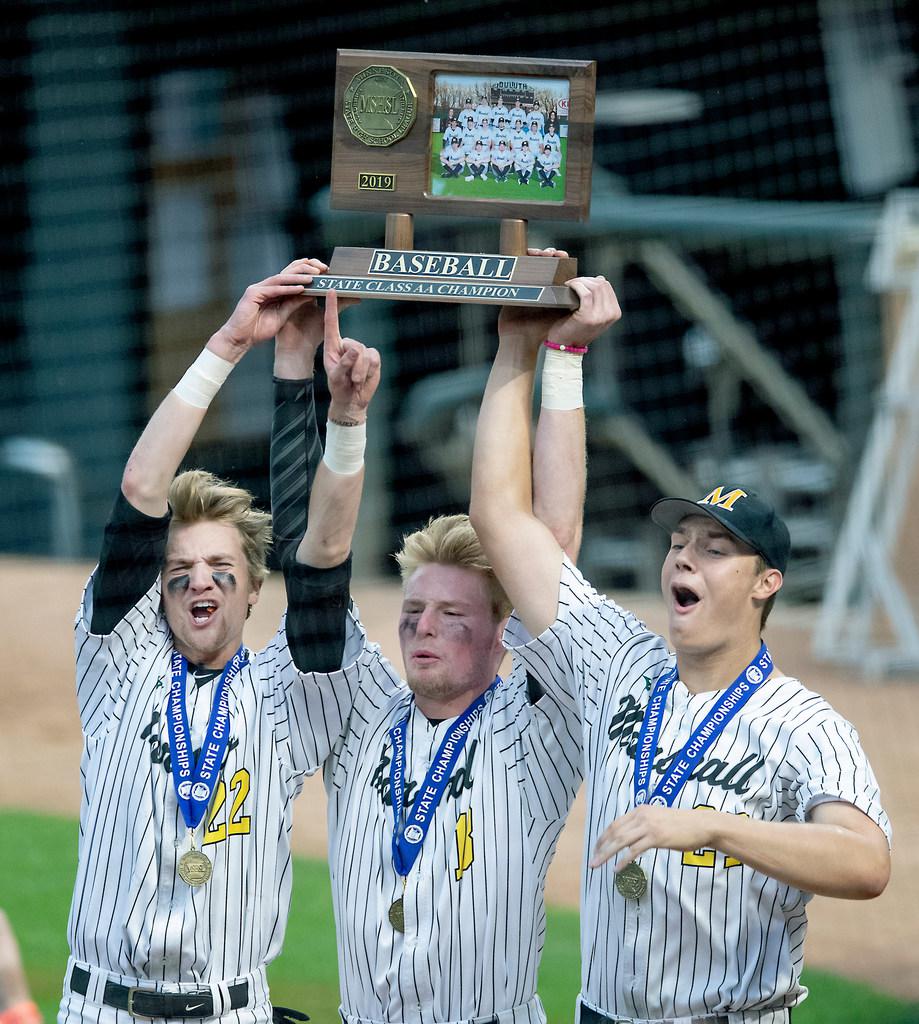 A two-run deficit? No problem. Duluth Marshall had trailed by at least that many in each of its first two state tournament games and came back to win. Why would Thursday be any different?

“I told them ‘I do not know how, I just know that we will do this,’ ” Duluth Marshall coach Joe Wicklund said of his team’s seventh-inning outburst. “We kind of relaxed and started hitting baseballs all over the park.”

The victory secured the first baseball state championship for a team from Duluth since 1950.

Photo gallery: Class 2A and 1A championships

Minnehaha Academy (20-5), appearing in its fourth state championship game in the last five seasons, had taken a 2-0 lead in the bottom of the fourth inning on runs by centerfielder Conor Johnson and shortstop Noah Dehne. In the meantime, the Redhawks’ defense was busy keeping the Hilltoppers off the board, thanks to two double plays and good fortune.

“We were unlucky to a certain degree,” Wicklund said. “Finally, we crashed through that wall with our bats in the seventh inning.”

His team trailing 2-1, Cole Maccoux led off the seventh with a double to center that was misplayed, landing Maccoux on third base. Alex Busick followed with a game-tying single. Two outs later, Carter Sullivan singled in Busick to give the Hilltoppers a 3-2 lead. Peter Hansen’s single scored Sullivan for the final margin of victory.

“We came back in every game in the state tournament. There was no doubt in my mind we were going to come back,” Maccoux said. “We have so much confidence in this team, it’s unreal.”

The victory was a salve for Duluth Marshall (26-1), still smarting from losing the 2018 Class 2A championship game.

“We worked harder in the last 365 days than I could have imagined,” Wicklund said. “I told the guys ‘At some point, you’ll have to answer the call’ and they did that with the bats.”

Duluth Marshall rallied with three runs in the top of the seventh inning, turning a one-run deficit into a two-run lead, and held on for a 4-2 victory over Minnehaha Academy on Thursday in the Class 2A championship game.

Cole Maccoux led off the seventh with a double to center and went to third on an error by the centerfielder. Alex Busick followed with a run-scoring single to tie the game 2-2. After the next two batters made outs, Carter Sullivan tripled to right field, scoring Busick. Peter Hansen’s single up the middle drove in the fourth run for the top-seeded Hilltoppers (26-1).

Minnehaha Academy, which was making its fourth championship game appearance in the last five seasons, finished 20-5.