Jordan Sagedahl took a no-hitter to the final inning in an 8-0 victory over New York Mills. 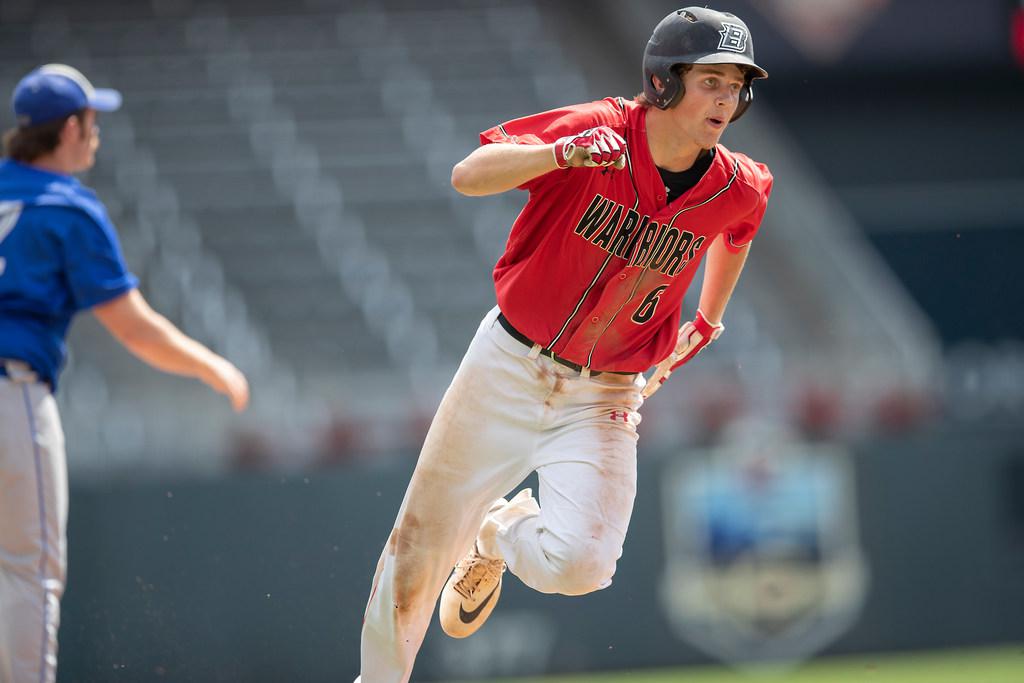 BOLDS pitcher Jordan Sagedahl sprinted past third base en route to an inside-the-park home run in the fifth inning of the Class 1A championship game against New York Mills on Thursday at Target Field. Photo: ELIZABETH FLORES • liz.flores@startribune.com

Watching the baseball he smacked roll to the right-center field wall, BOLD junior Jordan Sagedahl figured he would reach third base.

Getting waved home instead gave him a thrill.

So Sagedahl kept running, stumbling for just a moment rounding third base. A headfirst slide into home dirtied his white pants and red jersey on a day he was otherwise spotless against New York Mills.

Sagedahl’s inside-the-park home run and complete-game shutout highlighted an 8-0 victory for BOLD in the Class 1A state championship game Thursday at Target Field.

About the only thing not going Sagedahl’s way was losing a no-hitter when New York Mills (21-5) designated hitter Abe Carlson singled to lead off the top of the seventh and final inning.

Photo gallery: Class 1A and 2A championships

“I was just going for a win but it kind of hurt,” Sagedahl said. “But a shutout is pretty good.”

“His velocity was up there,” Eagles coach Dustin Geiser said. “It’s better pitching than we’ve seen probably most of the year. He could mix and match as he needed to but really he just had a nice fastball and he could locate it.”

Blake Flann, inserted as a pinch hitter in the fourth inning, delivered the game’s first run on an RBI double.

“Big Flower got a good timely hit for us,” said Sagedahl, calling Flann by a nickname bestowed on a football bus ride.

Then Sagedahl hustled for a home run to lead off the fifth inning.

“When I got in the dugout I was so gassed,” he said.
Sagedahl, the quarterback on the football team, said the victory helped ease the disappointment of losing the Class 1A Prep Bowl last fall.

A one-hitter and an inside-the-park home run by Jordan Sagedahl highlighted an 8-0 victory for BOLD in the Class 1A state championship game Thursday at Target Field.

Sagedahl led the Warriors (20-5) to their first title since 2013. His fifth-inning home run started with a sharp line drive into the gap in right-center field. The ball rolled to the wall and Sagedahl never broke stride to give BOLD a 2-0 lead.

The Warriors broke the game open with six more runs in the sixth inning.

New York Mills (21-5) designated hitter Abe Carlson broke-up Sagedahl’s no-hit bid with a single to lead off the top of the seventh and final inning.

BOLD, based in Olivia, also incorporates students from Bird Island and Lake Lillian.