The turnaround can be traced to a pancake house meeting that helped players open up and overcome a 1-5 start and injuries to six teammates throughout the season. 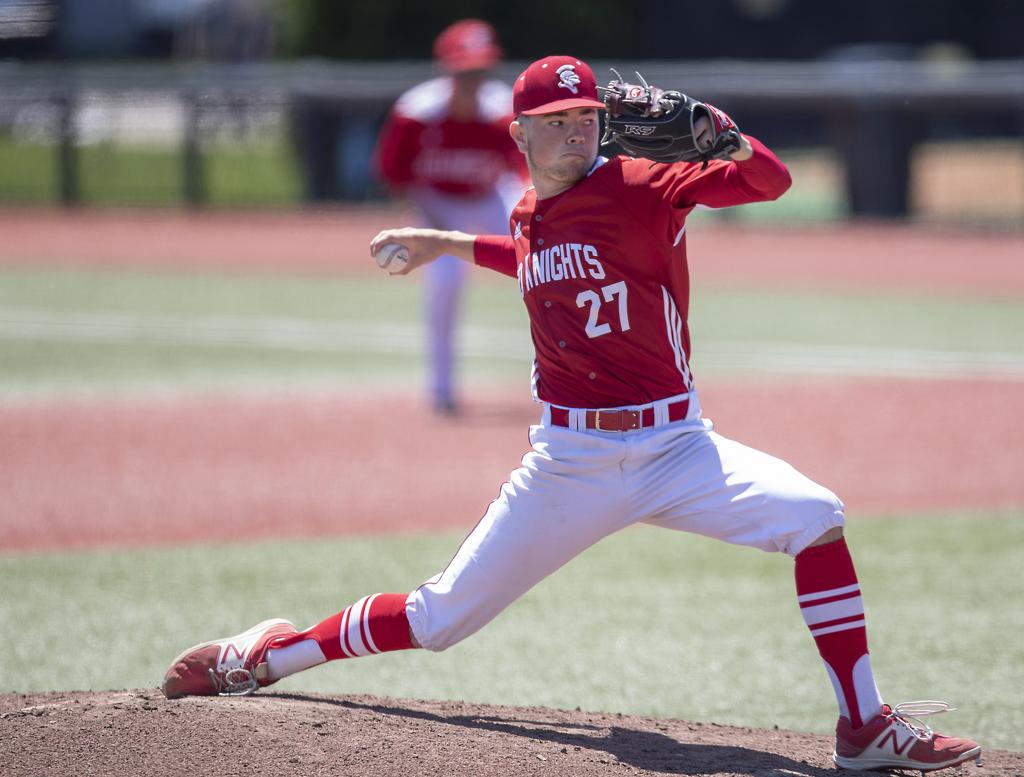 Benilde-St. Margaret's Blake Mahmood was sidelined for over a month and a half with a stress fracture in his back. He pitched the Red Knights' to victory last Thursday in the Class 3A quarterfinals at Siebert Field. Photo: ELIZABETH FLORES, Star Tribune

Benilde-St. Margaret’s had high expectations before the baseball season began. Then things started to unravel quickly due to injuries and a lack of confidence. An intervention was needed.

At the suggestion of his athletic director Jerry Pettinger, Red Knights second-year coach Andy Judkins held a breakfast/meeting with his seniors at The Original Pancake House.

It started out as a very quiet morning. Judkins is the program’s third coach in the past four years.

“I told them that I believed in them both as people and as a team,” Judkins said. “Things will change, but we have to change our mind-set.”

The players started opening up to Judkins.

“Some of them said they were pressing to do too much and some said it was confidence,” Judkins said. “I said the best thing you can be is yourself, play hard and grind through this thing until we are healthy.

“I had no idea what to expect leaving The Original Pancake House that morning, but things were different moving forward.”

The revival has the Red Knights (16-9) on the verge of their first state championship in school history. They meet St. Thomas Academy (20-9) on Thursday in the Class 3A finals.

“The first half of the year really challenged who we were as a team, but also proved to us that we were going to overcome adversity,” Judkins said.

The Red Knights have been besieged by injuries. Junior shortstop and team captain Zach Carden, who tore his ACL in the final section basketball game and has missed the entire season.

“We started the year without our No. 3 and 4 hitters and ace pitcher,” Judkins said.

It led to a 1-5 start to the season. The Red Knights were outscored by their opponents 49-14 in those six games.

“We tried moving guys around defensively and guys around in the lineup,” Judkins said. “It wasn’t pretty at times. There were plenty of ups and downs, but we worked through them.”

The Red Knights have since gone 15-4. Their pitching staff has allowed two runs or fewer in 14 of those games, including their last six (four section and two state tournament games).

“I’m extremely happy for the players,” Judkins said. “It’s really exciting considering everything we’ve been through this year.”

St. Thomas Academy is counting on 11 seniors on the roster to help bring home its first baseball state championship. The Cadets have been getting production throughout its lineup and have been patient at the plate, taking 10 walks in their two state tournament games.

Benilde-St. Margaret’s is only hitting .208 in the state tournament, but it doesn’t take many runs to win when your team ERA is 0.64. The championship game will feature both teams’ ace pitchers — Duke Coborn for St. Thomas Academy and Blake Mahmood for Benilde-St. Margaret’s. They both allowed one run while striking out 11 in their quarterfinal outings.