Self-described “small-town boys’’ from New Prague, playing in the program’s first state tournament in 39 years, are one victory from the Class 4A championship. 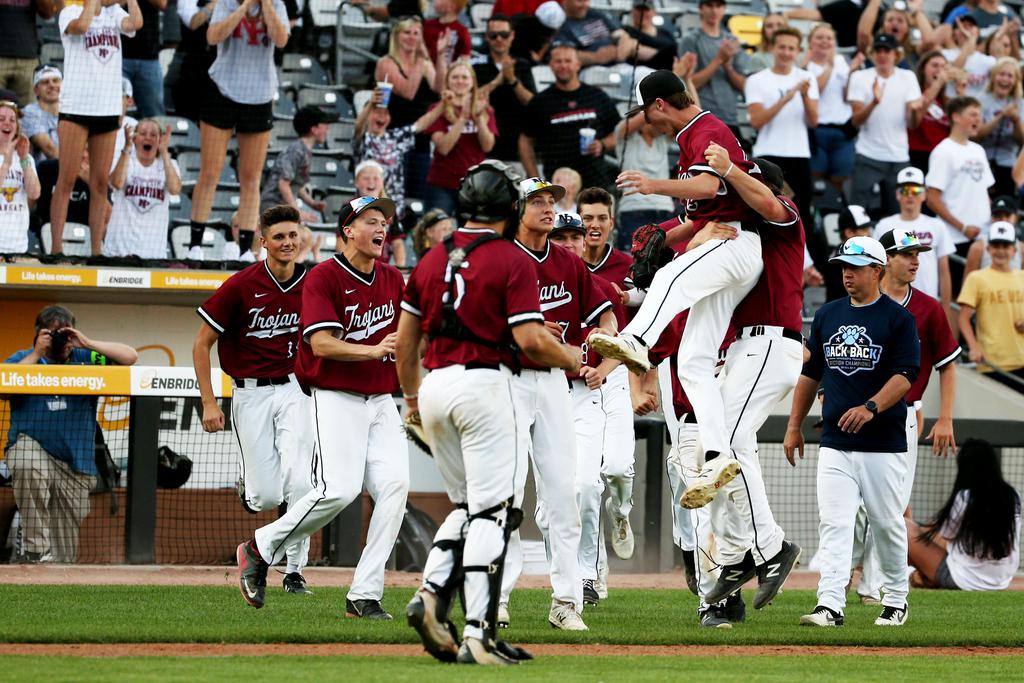 New Prague players celebrated in front of their fans at CHS Field last Friday after defeating Blaine in the Class 4A semifinals. Photo: NICOLE NERI • nicole.neri@startribune.com

Tanner Oakes can’t go anywhere in New Prague this days without getting a pat on the back and a good luck from townsfolks thrilled by the Trojans’ run through the Class 4A baseball tournament.

“Everyone I run into, the first thing they talk about is the baseball team,” said Oakes, New Prague’s first-year coach. “The whole town is talking about it. It’s pretty cool.”

New Prague is one victory from the first baseball state championship in school history. The surprising Trojans (18-8) play East Ridge, itself an unexpected finalist, in the Class 4A championship game at 7 p.m. Thursday at Target Field.

“I was in church on Sunday and Father was doing the announcements and he said ‘Good luck to the baseball team playing in the state championship this week,’ ” recalled Trojans outfielder and team captain Joe Weiers. “ ‘And good luck our own Joe Weiers, who is 7-for-8.’ I bet there were 100 people in the church and they all started clapping. It’s been insane.”

After a 12-7 regular season, the Trojans have won six of seven postseason games. They reached the finals by defeating No. 2-seeded Blaine 7-6 in the quarterfinals and Rogers 12-7 in the semifinals.

They’ve done it without a whiff of nervousness, remarkable considering the program hadn’t been to the state tournament since 1980, when today’s dads and uncles were in high school.

“It’s crazy how relaxed this team is,” said Oakes after practice on Monday. “You’d never guess we were preparing for the state championship game.”

“It’s funny,” said senior first baseman Sam Novak, a co-captain with Weiers. “I actually feel more relaxed playing in front of 1,000 people in the state tournament than I did during the season.”

Oakes’ calm demeanor has filtered down through the team. The son of well-respected former University of Minnesota pitching coach Todd Oakes, he said the most important thing he gleaned from late father is “teaching perspective.”

Said Weiers, “Coach Oakes doesn’t ever get flustered. He reminds us that the important things in life are relationships. You can lose, but life is not over. That helps us keep things in perspective.”

The Trojans have had chances to fold. They routed Lakeville North in the Section 1 championship game after the higher-seeded Panthers had defeated them the game before. And in both state tournament games, they have seen big leads disappear but never lost their forward momentum.

“We always keep going,” Novak said. “If we have some adversity, we’re going to find a way around it.”

The Trojans’ bond stems from knowing thay’re one of the smallest schools in Class 4A. They wear small-town pride proudly — “Small-town boys with a dream” has been the team motto for much of the season — and they relish the role being the little team that could.

“Blaine was over twice as big as we are,” Weiers said. “But we like being the underdogs.”

The stage won’t get any bigger than on Thursday, when players expect much of their hopeful community to be seated in the Target Field seats.

“I’d like to be in New Prague Thursday night,” Weiers said with a laugh. “It’s going to be unbelieveably empty. Nobody is going to be there.”

Don’t expect the Trojans to succumb to nerves, however. They’re too far along to get the jitters now.“We just going to do what we’re supposed to do.” Novak said. “Play some ball.”

East Ridge, playing in its first state tournament, has been the beneficiary of leaky defense by opponents. The Raptors have taken advantage of 13 walks, six errors, four hit batters and three wild pitches to defeat Mounds View 9-5 in the quarterfinals and top-seeded Stillwater 6-5 in the semifinals. In two games, East Ridge had more runs, 15, than base hits, 12, but avoided mistakes that plagued its opponents. New Prague’s relentless offense — with 19 runs and 23 hits — has been its driving force. The Trojans get No. 2 pitcher Joe Becker back in the dugout. Becker missed the first two games because he was on a European class trip. He returned early to join his teammates for the championship game.