The Trojans scored nine runs in the final three innings to end a remarkable run by a Royals squad that started the post-season six games under .500. 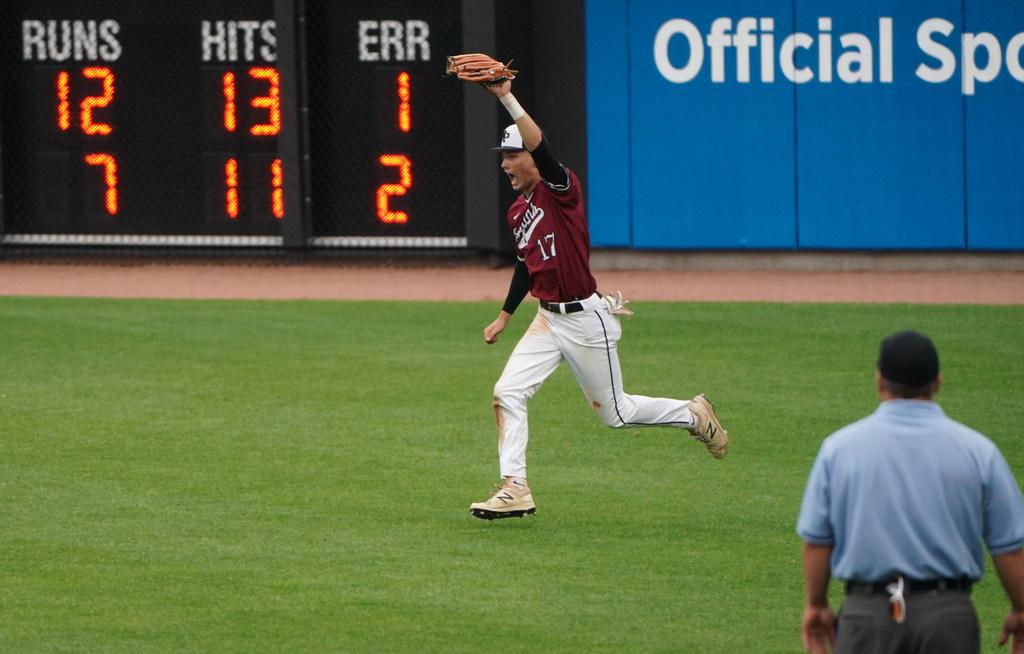 New Prague outfielder Cade Pavek (17) ran past the scoreboard and toward his teammates after catching the final out in the Trojans' victory against Rogers. Photo: Shari L. Gross ¥ shari.gross@startribune.com

There’s been no sign of nerves on the New Prague bench, despite not having made a state tournament appearance in 39 years. No doubt in the backs of their minds, and certainly no quit.

The Trojans continued their amazing post-season run with an offensive onslaught, knocking out 13 base hits in a 12-7 victory over Rogers in the Class 4A semifinals Saturday at CHS Field.

Joe Weiers continued his blistering pace at the plate with four hits in as many at-bats, giving him seven two state tournament games. Collin Dorzinski had three hits, drove in three runs and electrified CHS Field with his speed when he scored from first base on a single in the fifth inning. And the entire New Prague team looked completely comfortable in a state tournament environment that can often lead to butterflies.

“It’s amazing what these guys can do,” New Prague coach Tanner Oakes said. “I don’t know what the overall theme is, but they’ve been awesome.”

Oakes may not know, but both Dorzinski and Weiers have a good idea about what’s been driving the Trojans.

“Like Collin said, small-town boys with a dream. That’s what we’ve been saying since the first game of the section tournament,” Weiers said. “We’ve shown we can win in all different ways.”

Said Oakes, “That’s the greatest thing about our team. No matter what happens, we’re going to compete. They’re always going give it their best effort and luckily, they have some ability to back it up.”

The Trojans won Saturday with a relentless, resilient offense. They took a 1-0 lead in the first inning, only to see Rogers get two in the bottom of the inning.

No problem. They scored two runs in their next at-bat to retake the lead.

The Trojans built that lead to 8-2 in the top of the sixth, but Rogers answered with five runs in the bottom of the inning, cutting the lead to 8-7.

Again, no worries. New Prague added four runs in the top of the seventh, sapping any momentum Rogers had gained.

Rogers made a stunning post-season run after finishing the regular season six games under .500.

“They just kept swinging it and we didn’t do anything real great to stop it,” coach Brian Harapat said. “We weren’t able to put guys away and that’s a credit to New Prague.”

Joe Weiers went 4-for-4, scored two runs and drove in another, pacing a 13-hit New Prague attack to lead the Trojans to an 12-7 victory over Rogers in the Class 4A semifinals Saturday at CHS Field

Teammate Collin Dorzinski went 3-for-5, drove in three runs and scored a run for New Prague (18-8), which will play for a baseball state championship for the first time in school history.

The loss concluded Rogers’ remarkable postseason run. The Royals entered the playoffs with a 7-13 record but won five consecutive games to reach the state semifinals.