The team with a sub-.500 record is now two games from a state title. 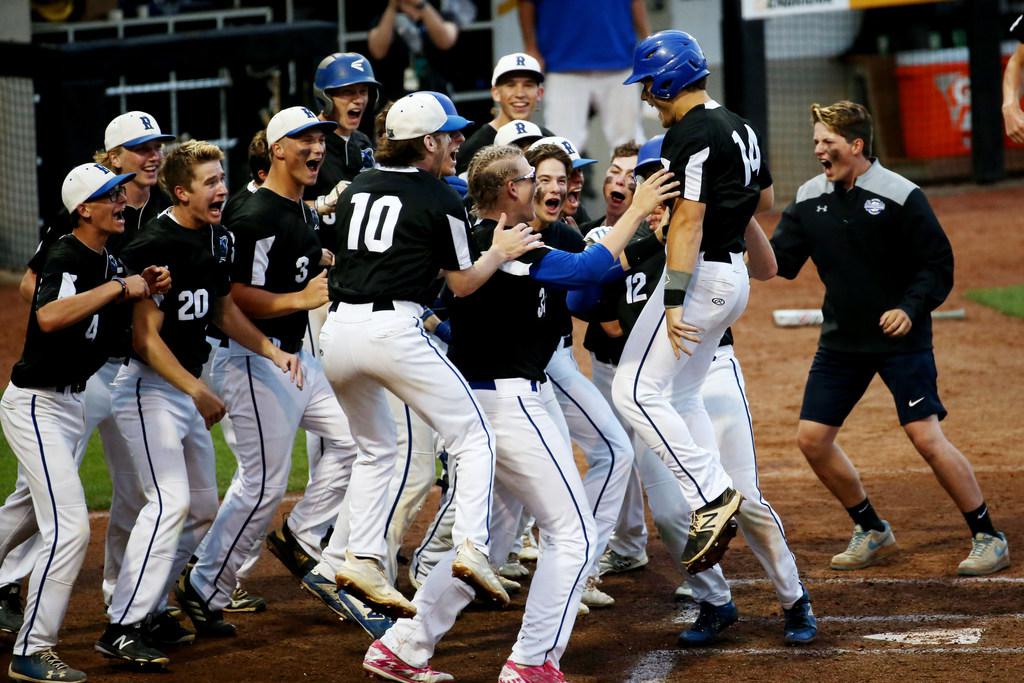 Rogers first baseman Aaron Schmidt (14) jumps into his teammates at home base after hitting a home run in the first inning against Hopkins. Photo: NICOLE NERI • nicole.neri@startribune.com

When Rogers coach Brian Harapat set up the Royals' schedule this season, he deliberately scheduled the toughest slate he could manage, hoping to prepare his team for the postseason.

The strategy paid off handsomely Friday when the Royals, who finished 7-13 during the regular season, defeated No. 3-seeded Hopkins 4-2 at CHS Field to advance to the Class 4A semifinals on Saturday.

“You don’t necessarily expect it to pay off to this degree, but in our section, you have to play teams like St. Michael, Elk River, Buffalo and Maple Grove,” Harapat said. “The only way to get ready for teams like that is to play teams that are better than them.”

The Royals even played Hopkins late in the regular season and lost by one run, 2-1. A loss, sure, but Harapat said it was a huge factor in their victory Friday.

“It had everything to do with it,” he said. “We’ve been there, we know we can play with you.”

Starting pitcher Garrett McLaughlin has been Rogers ace all season and lived up to the role by throwing a complete game. He held Hopkins to two runs on three hits and struck out seven.

“I had a good game against them last time. I knew their hitters. I knew what I could do against them and I went in with confidence,” McLaughlin said. “I was ready to go.”

The Royals got a boost when Aaron Schmidt, who had struggled at the plate all season, hit a two-run home run in the top of the second to give them an early lead.

“Schmitty has had a rough go of it,” Harapat said. “He’s hitting about a buck-seventy. But when he connects, he can bang it.”

Said McLaughlin, “It helped me out, it helped the team out. It put a smile on my face and got us ready to go for the next inning and the rest of the game.”

“Garrett, he’s a competitor and that’s what make him great,” Harapat said. “He’s tough. He’s just not going to give in. That’s what leaders do. These guys know any time we run him out there, we have a chance to win.”

Rogers went into the Class 4A state tournament with a sub-.500 record, 11-13. After defeating No. 3-seed Hopkins 4-2 in the final quarterfinal game on Friday, the surprising Royals are just two games from a state title.

Aaron Schmidt hit a two-run homer in the top of the second inning and the team added single runs in the third and fourth innings to build a 4-0 lead. Starter Garrett McLaughlin pitched a complete game and held Hopkins to two runs and three hits.

Hopkins didn’t help its cause in the field, committing three errors.

Check back later tonight for more on the game.