Back in the tournament after 39 years, New Prague starts off with a win

The Trojans took a big lead, then saw Blaine make it disappear before scoring in the seventh inning for a 7-6 victory. 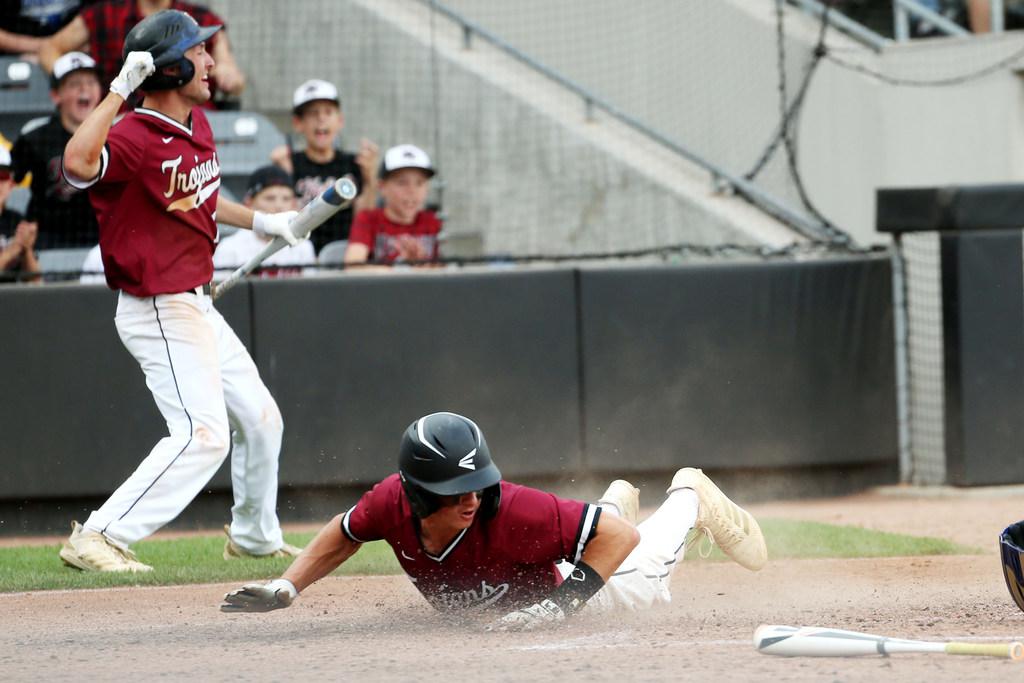 New Prague infielder Jake Deutsch (1) slid home in the seventh inning for what proved to be the game-winning run against Blaine. Photo: NICOLE NERI • nicole.neri@startribune.com

The ball was earmarked for left-center field, likely to score at least one run.

But New Prague’s Jake Deutsch had other plans. The junior shortstop took a step to his left, timed his jump and elevated, snaring the ball with a flick of his glove.

Fittingly, it was Deutsch who led off the seventh with a single and scored the eventual game-winning run on a ground ball to second base, lifting New Prague (17-8) to a 7-6 victory over No. 2-seeded Blaine (21-4) in the Class 4A quarterfinals Friday at CHS Field.

“I’ve got to say that was the hardest ball that’s ever been hit to me,” said Deutsch of his leaping catch to end Blaine’s threat in the bottom of the sixth inning. “Dang near took my glove off.”

“I’ve got to admit, I thought it was a base-hit,” New Prague coach Tanner Oakes said. “Luckily, he’s a very athletic kid and he had just enough hops to get that one.”

Blaine coach Eric Feigum was hoping the ball had just enough oomph to get over Deutsch’s glove. “I was willing it,” Feigum said. “That just goes to show how one play can change a game.”

New Prague, playing in its first state tournament since 1980, took a 6-0 lead with five runs in the top of the fifth inning. Pitcher Luke Tupy had held Blaine to one hit to that point and the Trojans’ lead appeared to be a comfortable one.

But Blaine, on its third time through the batting order, touched Tupy for five hits and six runs in the bottom of the fifth, turning a six-run deficit into a tie game.

“I’m proud of this team for coming back like that,” Feigum said.

Oakes expressed a similar sentiment about his team avoiding a let down when Blaine rallied.

“What ever happens, this team comes back and battles. It doesn’t matter how bad the situation is, they just continue to grind it out,” he said. “That’s been our M.O. all season.”

Deutsch said his teammates never lost faith in themselves after Blaine had tied the score. That is not part of their makeup.

“It’s crazy how our team can flip a switch and come back,” Deutsch said. “We kept our heads up. We knew we were going to come back and win it.”

New Prague scored five runs in the top of the sixth inning, then Blaine scored six runs in the bottom of the inning to tie it up.

But the Trojans came through with what proved to be the game-winning run in the top of the seventh to defeat the Bengals 7-6 in the Class 4A quarterfinals Friday at CHS Field.

Jake Deutsch scored the game-winning run for the Trojans, playing in their first state tournament since 1980.