The Raptors overcame a four-run deficit to defeat the Mustangs 9-5 and advance to the 4A semifinals. 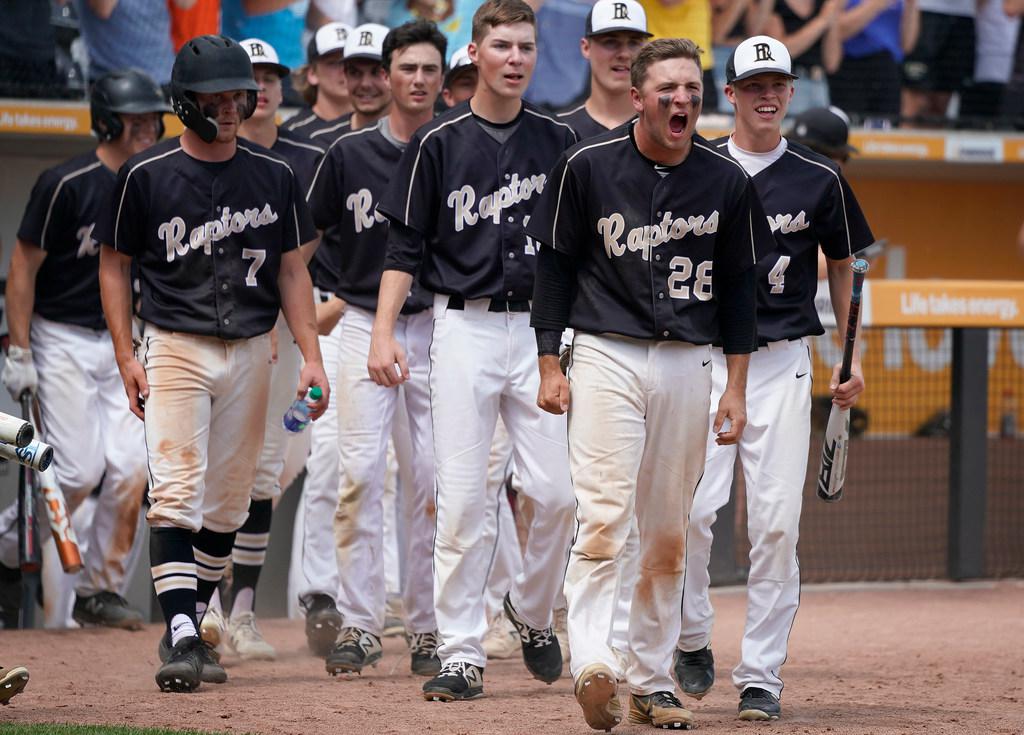 It’s certainly not the way East Ridge coach Brian Sprout would draw it up. But trailing by four runs in big games, then putting together a game-winning rally is the path the Raptors have followed in their last two games.

As long as his team comes out on top, Sprout will take it.

The Raptors, playing in their first state tournament, rallied from a 5-1 deficit with eight runs in the final two innings to defeat Mounds View 9-5 in the Class 4A quarterfinals Friday at CHS Field in St. Paul. It was reminiscent of the Section 3 championship game, when they came back after trailing 5-1 to defeat Eastview.

“We’ve been doing this for awhile now,” Sprout said. “It’s the idea that we’re not done. There’s more to do. They keep believing in that and you do it a couple of times and it sticks in your head.”

Mounds View took a 5-1 lead in the third inning on a long grand-slam home run by Robert Hogan. The Mustangs maintained that margin until the sixth inning.

That’s when East Ridge (19-6) scored two runs without the benefit of a base hit, thanks for Mounds View miscues, to make it a 5-3 deficit.

As tough as the sixth was for the Mustangs, it was positively unbearable for them in the seventh. The first six batters for East Ridge reached base and five of them eventually scored. Mounds View made one error and misplayed ground balls on two other occasions, keeping the East Ridge rally alive. By the time the inning was over, the Raptors had scored six runs and led 9-5.

“We didn’t make the plays,” Mounds View coach Mark Downey said. “We talked about championship level execution and we didn’t do it.”

East Ridge third baseman Carter Seidl, whose two-run single in the seventh drove in the game-tying runs, said all the Raptors needed was a spark to ignite the rally. They got that in the sixth and built on it in the seventh.

“That starts the energy and the we just fed off of it,” he said. “Any bit we can get, we just feed off of.”

East Ridge scored two runs in the sixth inning and six more in the top of the seventh to rally past Mounds View for a 9-5 in the Class 4A quarterfinals Friday at CHS Field.

The Mustangs had taken a 5-1 on a grand slam by Robert Hogan in the bottom of the third inning, but couldn’t add to the lead.

The first six batters of the seventh inning reached base for East Ridge and five of them scored.