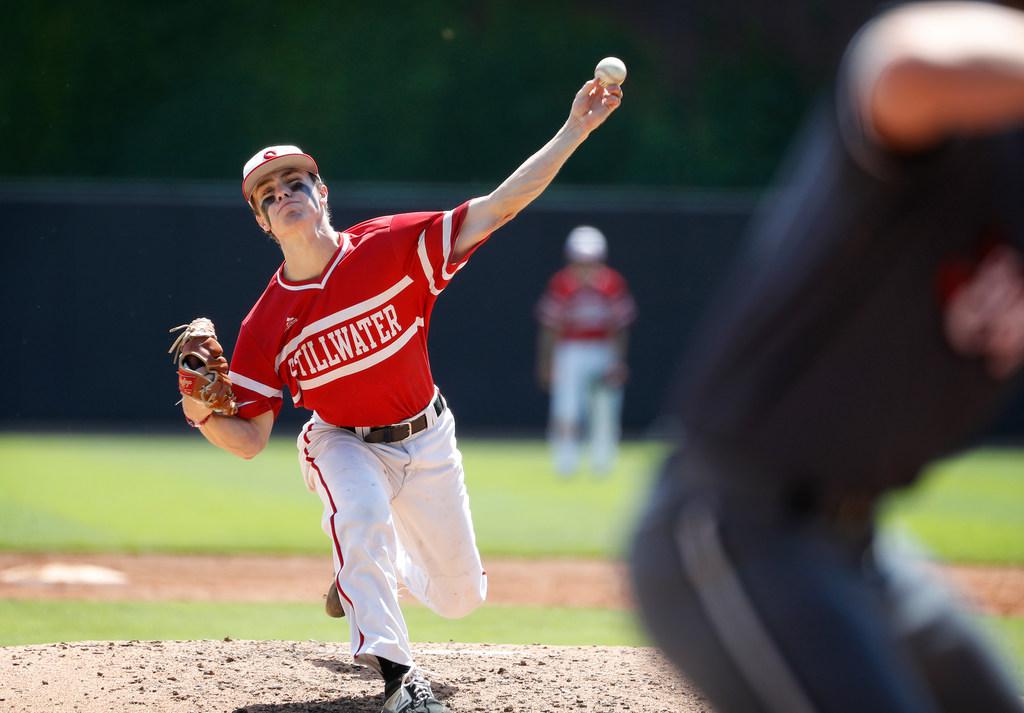 Stillwater pitcher Drew Gilbert corralled the final out of a five-inning, 11-0 no-hitter over Eden Prairie in the Class 4A quarterfinals by snaring a line-drive by Ryan Hanahoe that seemed headed toward centerfield.

That defensive play by Gilbert elicited the most excitement from Ponies coach Mike Parker, who has grown accustomed to greatness on the mound from the senior lefthander.

“Pitching-wise from Drew, we’ve seen that kind of effort,” Parker said. “Making that last play, that guy absolutely smashed it at him. For him to have the reflexes and athleticism to make that’s play, that’s his biggest thing. He’s just athletic.”

While Gilbert was retiring the Eden Prairie (17-9) hitters — he didn’t allow the Eagles to put the ball in play in the first two innings and struck out eight of the first 10 batters he faced — the Ponies (23-2) put up 11 runs and 11 hits to turn the game into a five-inning rout.

“I can’t say enough about my teammates,” said Gilbert, the Star Tribune's Metro Player of the Year. “Putting 11 runs up there makes it a lot easier to pound the zone.”

The no-hitter was Gilbert's third of the season and the team's fifth.

Senior catcher Logan Jordan has been the recipient of Gilbert’s pitches for most of their high school careers. He knows when Gilbert, and fellow fireballing pitcher Will Frisch, are on top of their games, which happens often.

“I love it. I like their speed, I like where they locate [the ball],” he said. “I feel so comfortable catching them. I’d rather catch a fast pitcher than a slow pitcher, honestly.''

Jordan not only had a first-hand view of the no-hitter, he contributed big with his bat, going 3-for-3 with two doubles to the warning track.

“The great thing about Logan is that when he gets up in the count, he can put some good swings on the ball,” Parker said.

“Once one person gets a big hit, the whole teams rallies,” he said. “And once the bench gets going and everyone gets into the game, it’s hard to stop us.”

Drew Gilbert pitched a five-inning no-hitter and Stillwater pounded out 11 hits en route to an 11-0 victory over Eden Prairie in the first quarterfinals of the day. Logan Jordan doubled twice for the Ponies.