With the victory, the Royals advance to their first Class 4A state tournament. They last claimed a section title in 2012, when they competed in Class 3A, Section 6. 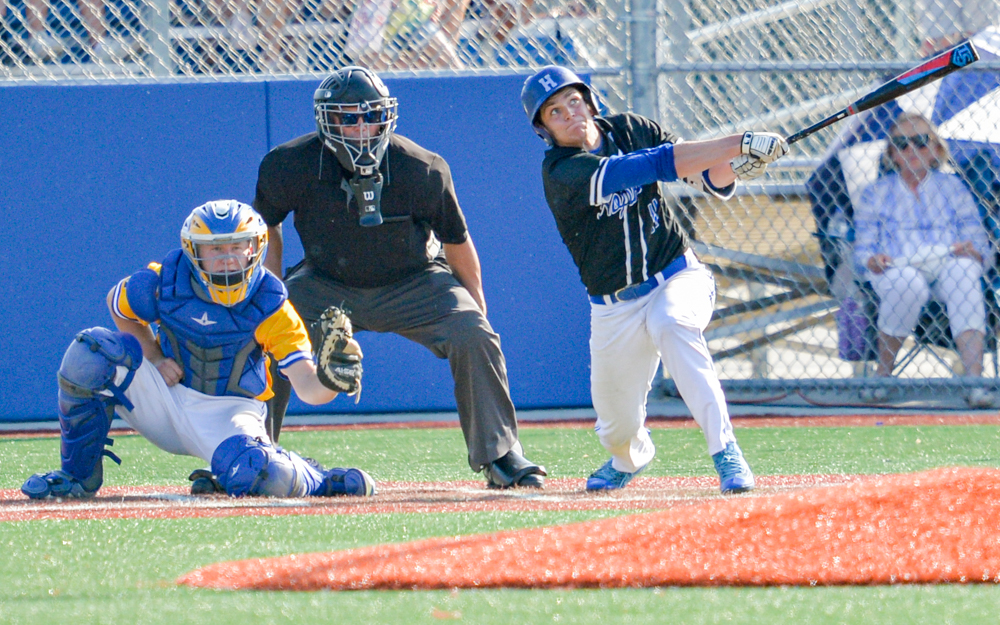 Hopkins came into Friday’s Class 4A, Section 6 championship game with some leeway. The Royals were undefeated in the double-elimination tournament and could afford to lose to Wayzata and still have a second game to advance to state. But Hopkins coach Jason Mihalakis made it clear the Royals had no interest in playing a second game, with the temperature hitting over 90 degrees.

The Royals, No. 10 in the final Class 4A Star Tribune metro rankings this season, didn’t need that second game. They took care of business, defeating Lake Conference foe Wayzata 8-4 at Hopkins High School to advance to next week’s Class 4A state tournament.

It looked like the Royals (18-6) played with urgency, as Luke Polyak hit the first pitch of the game right back up the middle for a single. The Royals converted that leadoff hit into a three-run first inning, with additional run support coming from a ground-rule double off the bat of Calvin Harris and via a sacrifice fly from Sam Sikkink. 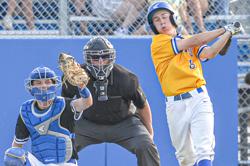 Polyak explained that being aggressive at the plate was a part of the game plan, as the Hopkins’ hitter had become familiar with Wayzata (15-9) pitching.

“We’ve seen Wayzata three times this year, I know their pitchers pretty well. Coach went in saying be aggressive, so I took that to mean swing at every first pitch that I saw,” Polyak said.

That approach worked, as he went 4-for-4 with a home run, a double, two RBIs and two runs scored.

The No. 9-4A Trojans, however, responded right away by applying pressure in the bottom of the first. Cullen Stamp and Keegan Nickel got back-to-back hits, then Brennan Albert walked to fill the bases with Trojans with no outs.

“I went out to the mound when they got guys on first and second and I said, ‘Let’s get out of here with one.’ That’s what we tried to do all year, limit the damage. Instead of getting a three-run inning, give them one,” Mihalakis said.

That’s exactly what happened. Carter Tibbits hit a sacrifice fly to score Stamp, but Wyatt Nelson struck out the next two batters to limit the damage.

“Getting out of that was really big for us, because we came back and snapped on one run, and that was probably the biggest run of the game for us when we got that fourth one,” Mihalakis said.

That fourth run came when Kyle Feduccia knocked a solo home run in the top of the second. It was his first career homer, and it extended the Hopkins lead to three.

The Trojans tallied three runs in the top of the fifth, getting three consecutive RBI at-bats from Tibbits, Ben Leuthner and Turner MacIntosh. Wayzata, which had won the three previous section championships, was right back in the game.

Polyak’s fourth hit, however, proved to be a killer, as he drove a two-run home run over the left field fence to kill the momentum the Trojans had built up.

“I thought I got too high on it and then the wind helped me out a lot,” Polyak said. “It felt good to take the lead there, and take it for good.”

Hopkins lost both of its previous games against Wayzata this season. Both of which came in the regular season, but it was the third matchup that was most important, with the winner advancing to state.

“We’ve had a really hard time with Wayzata over the years, especially in my tenure the last three years; they’re just coached so well. Even at the end there I had butterflies because we didn’t want to see the tying run get to the plate,” Mihalakis said.

Those butterflies can settle until next Friday, when Hopkins opens its state tournament run at CHS Field in St. Paul. It’s the Royals’ first state tournament appearance since 2012, when they won Class 3A, Section 6 to advance. 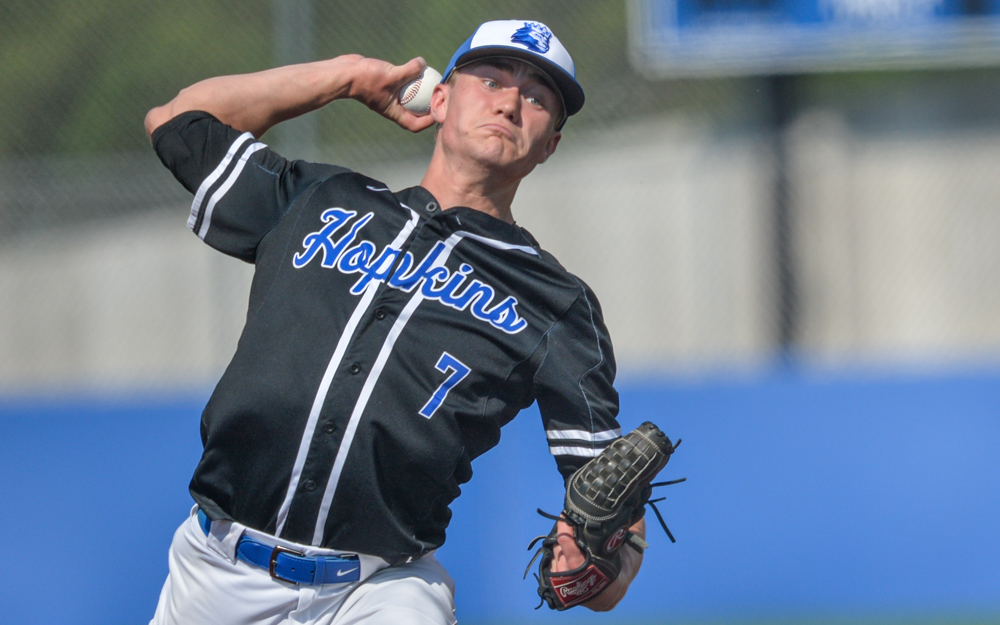 The Royals’ Wyatt Nelson pitched six innings in the Class 4A, Section 6 final. He gave up four earned runs, six hits, one walk and he struck out seven helping the Royals beat the Trojans 8-4 on Friday. Photo by Earl J. Ebensteiner, SportsEngine

Hopkins defeated Wayzata 8-4 in the Class 4A, Section 6 championship game at Hopkins High School on Friday night to advance to the Class 4A state tournament, which starts next week.

The Royals (18-6) wasted no time getting on the scoreboard, posting three runs in the top of the first inning. Luke Polyak hit a single on the first pitch of the game, and after an error, Calvin Harris smashed a two-run ground-rule double. Hopkins, ranked No. 10 in the final Class 4A Star Tribune metro rankings this season, added a third run courtesy of sacrifice fly from Sam Sikkink.

Wayzata (15-9) responded by scoring a run in the bottom of the first, a sacrifice fly by Carter Tibbits. But there could have been more damage dealt, as the No. 9-4A Trojans loaded the bases with no outs. Hopkins starter Wyatt Nelson worked out of the jam, then cruised to the fifth inning when the Trojans plated three more runs.

Nelson stayed in the game and finished six innings. He gave up four earned runs, six hits, one walk and he struck out seven batters.

Five runs would’ve been enough for the Royals, but they got some nice insurance runs in the sixth by way of a two-run home run by Polyak. He finished the game 4-for-4 from the plate with a home run, a double, two RBIs and two runs scored.

Tibbits was the most effective hitter for the Trojans, going 1-for-1 with two sacrifice flies, a walk and two RBIs.

The Royals’ victory marks the end of a three-year reign for Wayzata as section champion. Hopkins last won a section title in 2012, when it competed in Class 3A, Section 6. 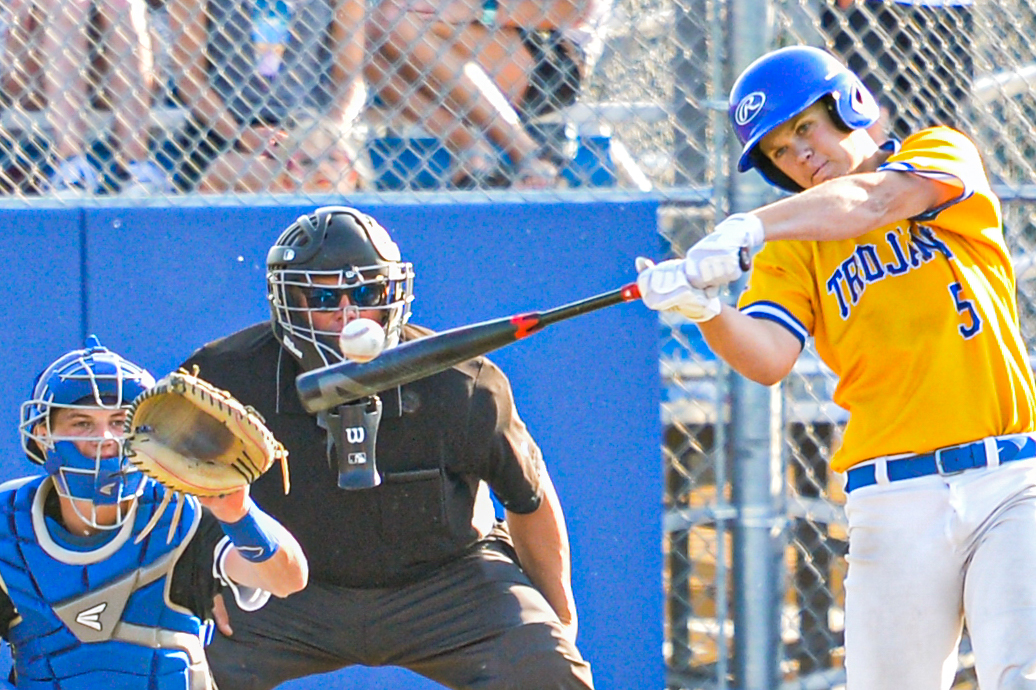 Wayzata’s Carter Tibbits was effective at the plate, hitting two sacrifice flies for RBIs but the Trojans still lost to Hopkins 8-4 Friday night in the Class 4A, Section 6 final. Photo by Earl J. Ebensteiner, SportsEngine