The Pioneers head to the state tournament for the first time since 2012. 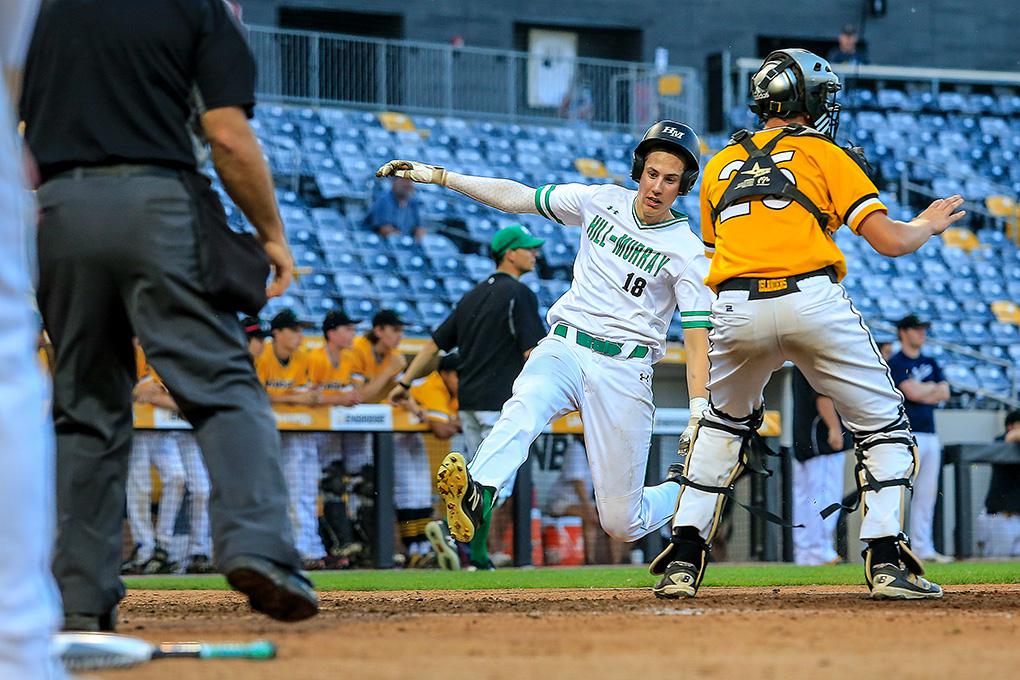 Hill-Murray's Jack Schwartz (18) scored one of the Pioneers' four fourth-inning runs in a Class 3A, Section 4 championship victory Thursday over DeLaSalle. Photo by Mark Hvidsten, SportsEngine 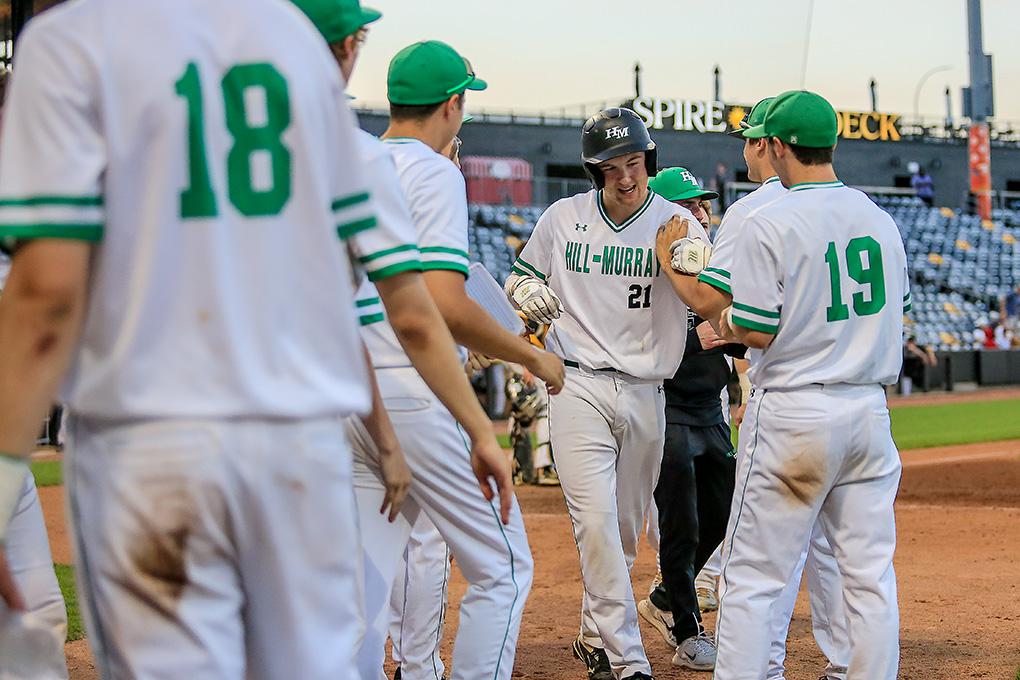 Tasked with facing for a third time a DeLaSalle team that is ranked No. 2 in Class 3A's Star Tribune metro rankings from May 25, and having twice faltered against the Islanders — as recently as Monday night 6-3 in the Class 3A, Section 4 tournament — Cicalello saw that bit of history would not be enough to deter his group. 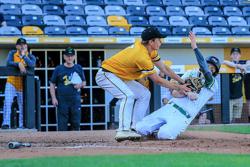 At this point of the season, you take things one inning, one pitch at a time, he said, and certainly someone or some ones would set things right.

“We just kept talking about how each person needs to try to find a way to make a difference,” Cicalello said. “Nobody needs to be Superman today, we just need a whole bunch of Clark Kents.”

Eventually the barrier between the alter egos was torn down as Hill-Murray began knocking the ball around and saw its pitchers cut through 14 innings without allowing a run.

Hill-Murray battled through two games Thursday to avoid shutting down operations for the summer, claiming a pair of shutout victories (5-0 and 4-0) against DeLaSalle for the Class 3A, Section 4 title. The reward for the sweep is a spot in next week’s Class 3A state tournament — the Pioneers’ first trip since 2012.

Gutknecht, a tall, lean southpaw, quickly went to work in the opener and attacked DeLaSalle’s potent set of sticks, working the corners and changing speeds to stay one step ahead of the batters.

“We had a force on the mound (in Game 1),” Cicalello says. “Certainly a performance like that, a complete game shutout… it definitely allowed us to carry some momentum into the second game.”

“Mitch put it on his shoulders and competed like he did, we all feed off it,” he added.

Moreover, Forrest, whose at-bats have been limited this season, carried his weight in the first game at the plate, where he went 3-for-3 with a double, RBI and run scored, along with a walk — all from batting out of the No. 8 spot in the lineup.

“I don’t think it really came down to who wanted it more, but maybe who was willing to work the hardest for it,” Forrest says. “Today, everyone here showed up ready to work, and I think it showed.”

Hill-Murray tore the second game open with a four-run fourth inning in which they came out bunting, and strung together five straight singles. In his second and last at-bat of the game, Forrest made a significant contribution, smashing an RBI double to cap off the inning and the rally.

“The energy battle was in our favor today,” Gutknecht said. “We had all the momentum, and the energy in our dugout was great.”

Game 2 closed with a whimper for DeLaSalle as the Islanders grounded out five times over the final two innings. Part of it was pitching, the other part defense as the Pioneers limited miscues and errors to just one per game Thursday.

“The fundamentals carried us,” Gutknecht said. “We played perfect defense, we bunted, we had timely hitting when we needed to, and our pitching was outstanding.” 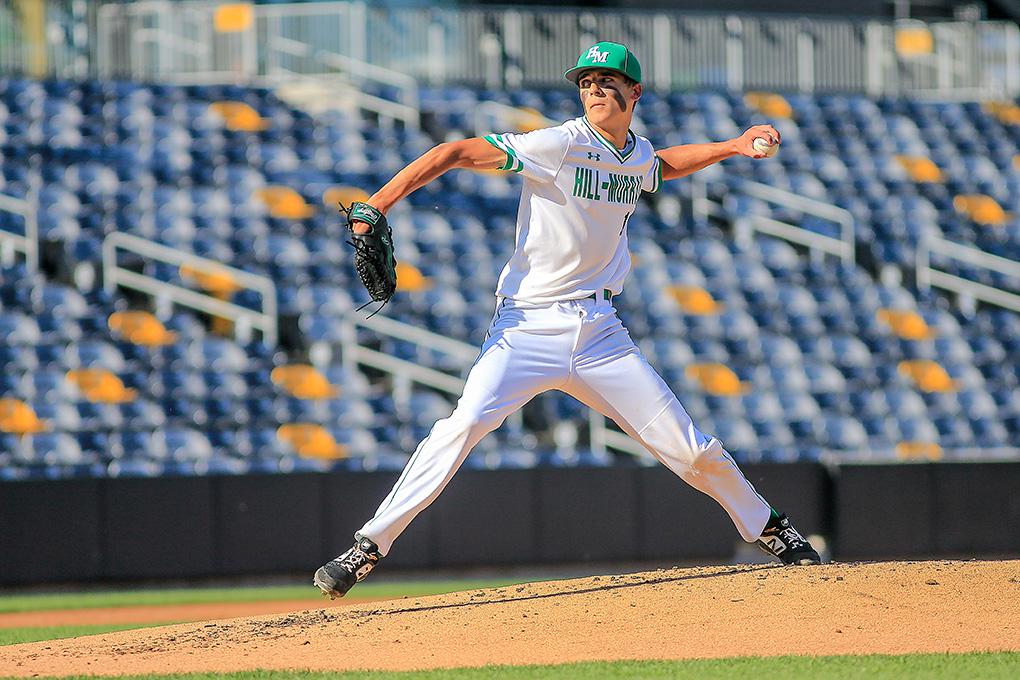 Hill-Murray's Mitch Gutknecht threw a one-hitter, striking out six, as the Pioneers beat DeLaSalle 5-0 in the first game of the Class 3A, Section 4 championship. Photo by Mark Hvidsten, SportsEngine

Hill-Murray battled through two games Thursday to avoid shutting down operations for the summer.

Coming off a 5-0 victory in Game 1 — its first in three tries this season against DeLaSalle — the Pioneers simply kept things going.

The reward for a 4-0 Game 2 win in the Class 3A, Section 4 final is a spot in next week’s state tournament, the Pioneers’ first trip since 2012.

Coming into Thursday night, Hill-Murray had fallen twice to the Islanders (15-5-1), ranked No. 2 in the Star Tribune metro area Class 3A rankings. But it all changed quickly in the opener — and it carried into the nightcap.

Benton Scott took the loss on the mound for DeLaSalle in Game 2. Scott cruised through the first three innings before running into trouble in the fourth, where he allowed four earned runs on five hits in the frame. 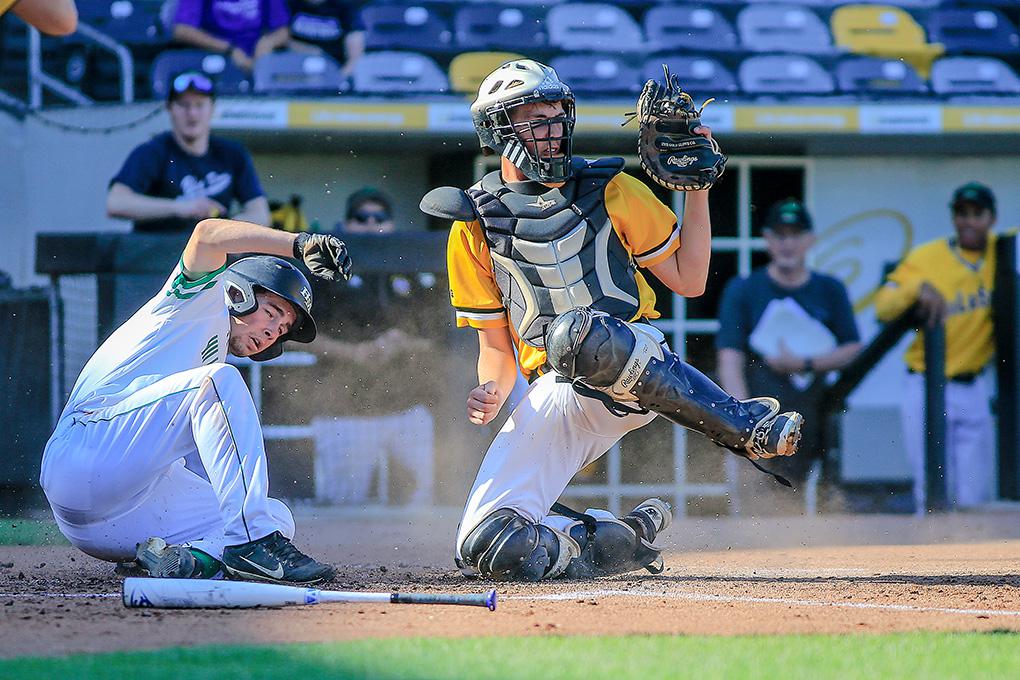 Hill-Murray baserunner David Gallagher beat the tag of DeLaSalle catcher Luke Timmerman to score the game's first run. Hill-Murray went on to a 5-0 victory in the first game of the Class 3A, Section 4 championship. Photo by Mark Hvidsten, SportsEngine