Stillwater rallies late, slips past Woodbury in extra innings to return to state

The Ponies scored a pair of runs in the bottom of the seventh to force an eighth inning in the Class 4A, Section 4 championship game. 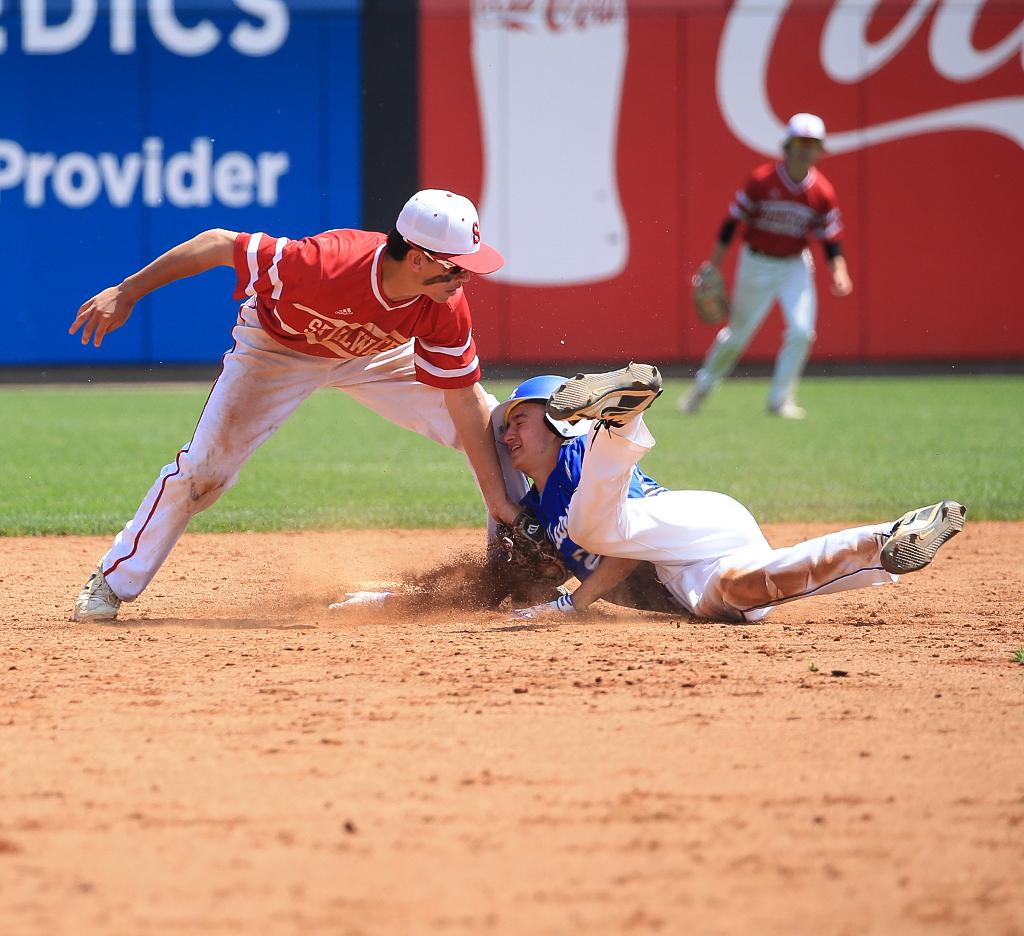 Stillwater second baseman Johnathan Koehn catches Sam Malec off base. Koehn's RBI single to center in the bottom of the eighth inning gave the Ponies a 3-2 win and entry into next weeks Class 4A state tournament. Photo by Cheryl Myers, SportsEngine

Stillwater’s Jon Koehn hit a looping liner to center field in the bottom of the eighth inning. On his way to first base, he was downtrodden.

"When I hit the ball, I thought, 'I just flew out. We're going to go to the next inning,'" the second baseman said. "Then I saw it land. Then I saw the centerfielder bobble it.

"Next thing I knew, my teammates were dogpiling, and I was just standing on first base. I didn't know what happened."

Here's what happened: Teammate Alex Ritzer was running on the pitch Koehn lined to center, so he raced to third when the ball dropped in center. And when Woodbury's centerfielder mishandled the ball, Ritzer scored.

Ritzer's run gave Stillwater a 3-2 victory over Woodbury (20-6) in eight innings in the Class 4A, Section 4 championship game at CHS Field in St. Paul on Tuesday.

The victory means the Ponies, No. 23 in the USA Today Super 25 national rankings, have earned the right to defend their Class 4A state title.

Entering the bottom of the seventh inning, it appeared as if Suburban East Conference rival Woodbury, which had dealt Stillwater (22-2) one of its two regular-season losses this season, would force a second game to determine the section title. Up to that point, the Royals, No. 3 in the Star Tribune Class 4A metro rankings, had made fewer errors in the pitchers’ duel between Woodbury’s Adam Mazur and Stillwater's Drew Gilbert. 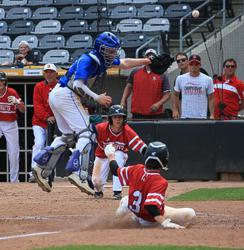 "At this time of year, games are won and lost on little plays like stolen bases and errors," Ponies coach Mike Parker said. "For six innings, they did the little things better than we did. But we were lucky that Drew kept us in the game."

Gilbert, an Oregon State commit, allowed just one hit in eight innings and struck out 14. But five walks had given Woodbury some baserunners, and the Royals took advantage of several Stillwater miscues to plate two runs.

Mazur drew a leadoff walk in the top of the fourth inning, then sped to third when Gilbert threw wildly on a pickoff attempt. One out later, Mazur scored on a single by Rodney Erickson.

Brock Rinehart walked in the sixth and moved to second on a Gilbert balk before Mazur was walked intentionally. On a double steal, the throw to third base instead flew into left field, allowing Rinehart to score.

"We knew we had made some little mistakes early in the game," Koehn said. "But we knew we had to keep playing and just make something happen."

That was easier said than done against Mazur, who allowed just a single through the first six innings. He needed just 66 pitches to carry a shutout into the seventh.

"They're a good-hitting team, so they were swinging early because they knew if they fell behind it was going to be tough," Woodbury coach Kevin McDermott said. "Adam pounds the zone with multiple pitches, and he has great mound presence. He knows how to pitch."

But with one out in the bottom of the seventh, Stillwater's Will Frisch lined a double off the wall in left field. Kade Peloquin then dumped a double down the left-field line to score pinch-runner Noah Potter, and when the throw back to the infield scooted harmlessly towards the mound, Peloquin raced to third.

That misplay proved costly when Mazur struck out Logan Jordan on a pitch in the dirt. Rinehart, the Royals’ catcher, threw to first for the putout, but Peloquin beat the return throw to home plate to tie the game.

"They were the ones who had the game speed up on them early," Woodbury coach Kevin McDermott said. "But then the game sped up on us late, and we made a few mistakes that hurt us. But when you have two big-time arms — two of the best pitchers in the state — that's what the game's going to be. We were only one out away. We felt good about where we were at, but it was just a quirky play."

After Mazur recorded a strikeout to end the seventh, Gilbert struck out the side in the top of the eighth.

"We were lucky that Drew had a few pitches left, and he got us through that eighth inning," Parker said. "We thought that, if we got to the bottom of the eighth, we would somehow get a run. But it didn't look good at first."

That's because Mazur, a South Dakota State commit, fanned the first two batters he faced to raise his strikeout total to 11. But Ritzer singled to left, setting the stage for Koehn's winning hit.

"Since there were two strikes on me, I knew the chances of him throwing me a straight pitch were out the window," Koehn said. "I just told myself I could not strike out. I just tried to put the ball in play and hoped something good happened."

For Stillwater, something good happened when Koehn's hit eventually plated Ritzer and the Ponies had beaten the Royals for the second straight year to earn a trip to state. 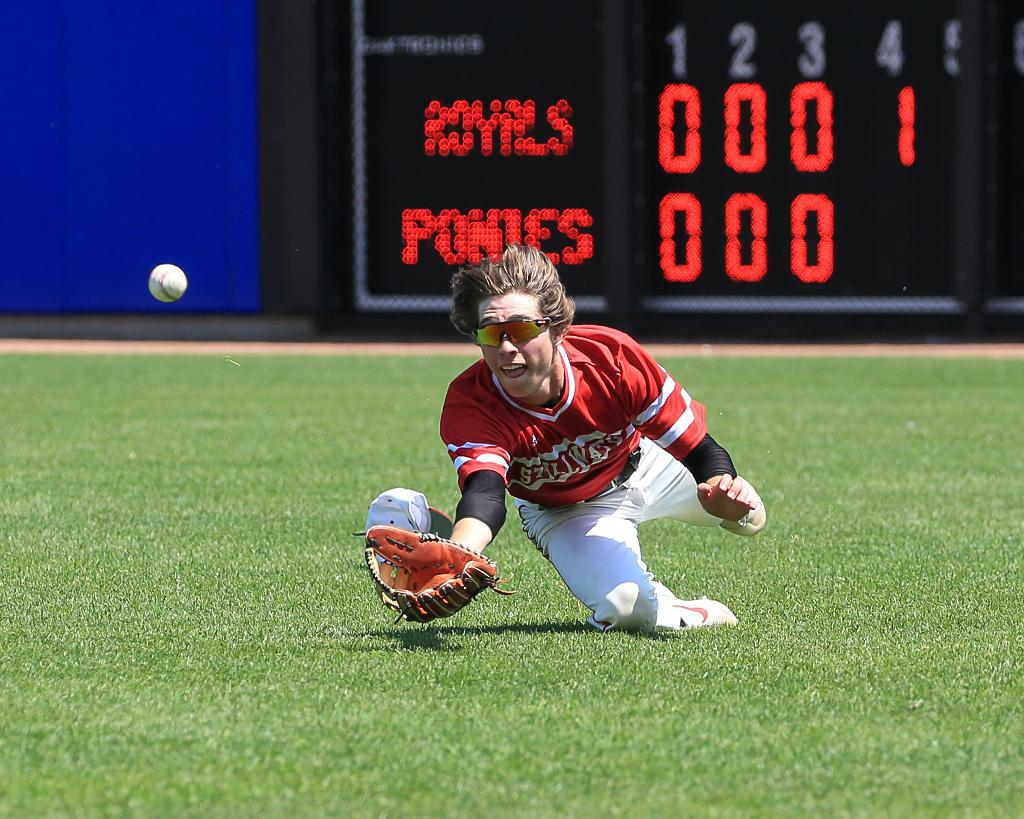 Kade Peloquin's diving catch left a Woodbury runner stranded at third, holding the Royals to just one run in the top of the fourth inning. Photo by Cheryl Myers, SportsEngine

Stillwater rallied to claim its second consecutive Class 4A, Section 4 championship with a 3-2 victory over Woodbury in eight innings at CHS Field in St. Paul on Tuesday afternoon.

The late rally capped what had been a pitching duel between Stillwater’s Drew Gilbert and Adam Mazur of Woodbury. Gilbert allowed one hit and five walks while fanning 14 in eight innings. Mazur, meanwhile, surrendered five hits, one walk and collected 11 whiffs in 7 2/3 innings.

Woodbury (20-6) scored its first run in the top of the fourth. Mazur walked, then raced to third when Gilbert threw wildly to first on a pickoff attempt. Mazur then scored on a single by Rodney Erickson.

The Royals, ranked No. 3 in the Star Tribune’s Class 4A metro rankings, added another unearned run in the sixth when Brock Rinehart, who was on second base, and Mazur, on first base, executed a double-steal, with Rinehart coming home after the throw to third sailed into left field.

No. 1-4A Stillwater, which is also No. 23 in USA Today’s Super 25 national rankings, tied it 2-2 in the seventh with back-to-back doubles by Will Frisch and Kade Peloquin. That set the stage for the game-winning rally in the eighth, which began when Alex Ritzer singled with two outs and no one on. Ritzer was running when Jon Koehn lined a single to center, and the ball bounced away from the centerfielder to allow Ritzer to score the winning run. 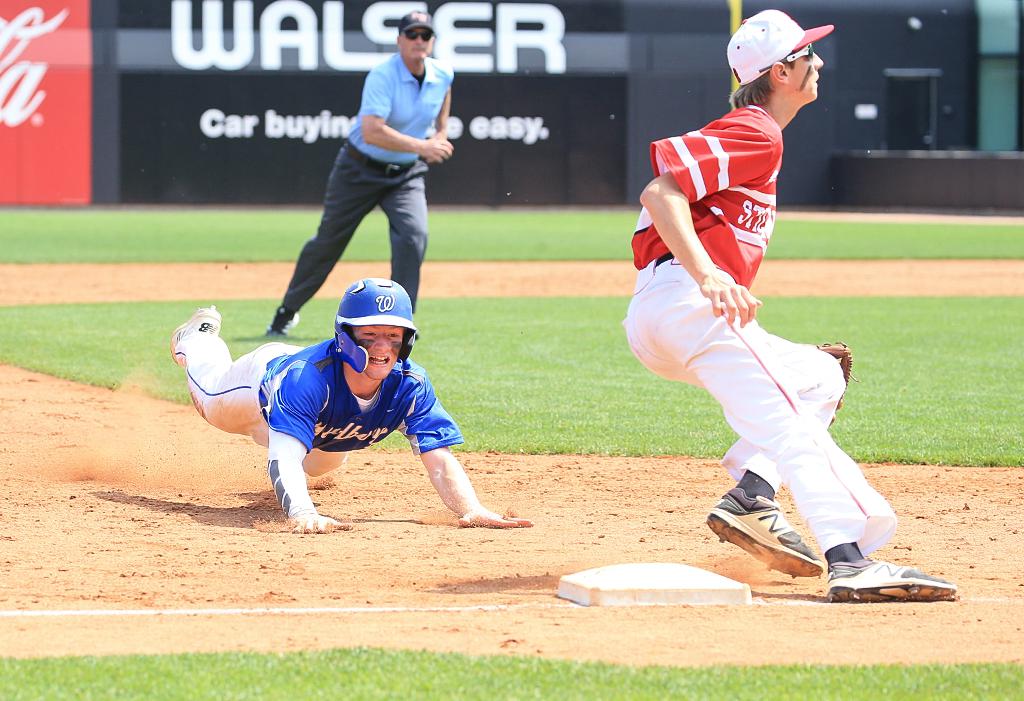 Brock Rinehart dives into third base just before heading for home on a wild throw to third, giving Woodbury a 2-0 lead in the sixth inning. Photo by Cheryl Myers, SportsEngine