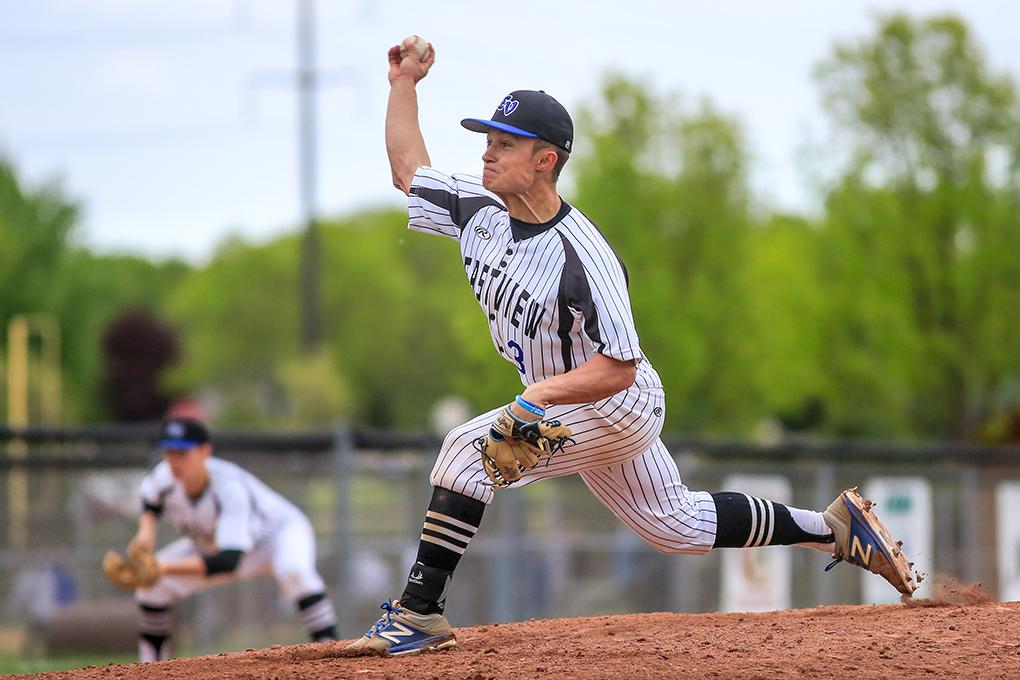 Kathan Decker struck out five of the 10 batters he faced in three innings of scoreless relief in Eastview's 5-2 victory over Mahtomedi. Photo by Mark Hvidsten, SportsEngine 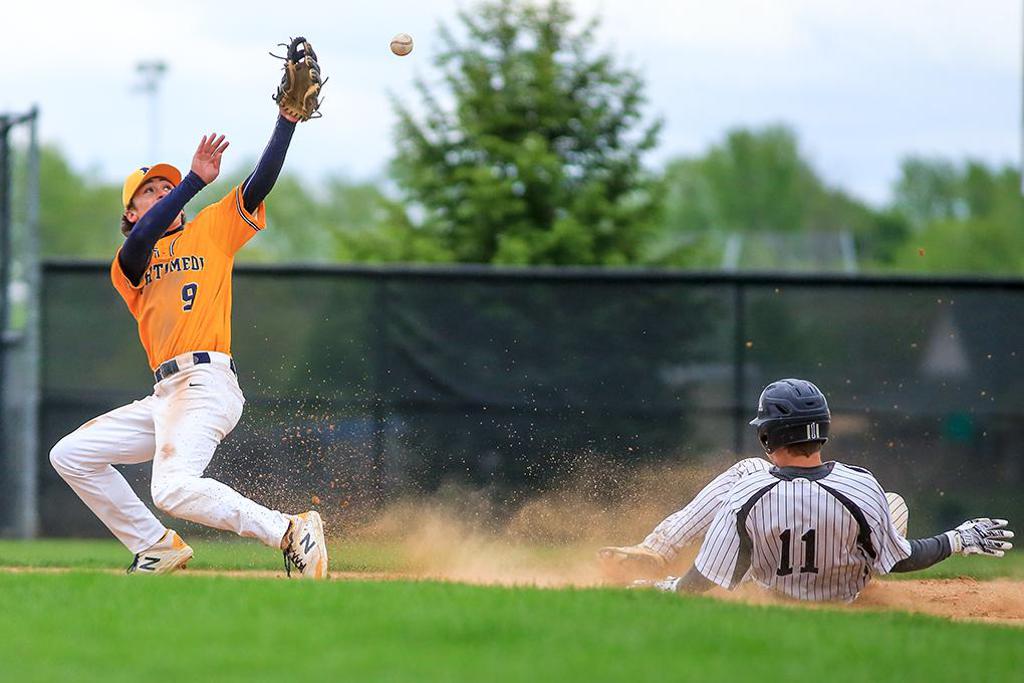 Mahtomedi shortstop Blake Hogan tried to get a handle on the throw from the plate as Eastview's Ryan Munson stole second in the fourth inning. Photo by Mark Hvidsten, SportsEngine

As Eastview's leadoff hitter, senior outfielder Kathan Decker said he expects to be the spark plug for his team’s offense. It’s just that he usually accomplishes that with his bat.

On Thursday in a regular-season finale, Decker provided that needed spark with his pitching arm and lifted the Lightning to a 5-2 victory over Mahtomedi.

Decker replaced starter Austin Greven to start the fourth inning and struck out the first two batters he faced. He set the Zephyrs down in order for the first time in the game and faced just 10 batters over three innings. 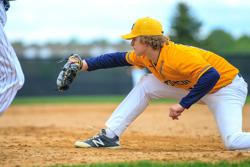 That proved to be just the lift needed for South Suburban Conference regular-season champion Eastview (15-5, 13-5), which was melting under the pressure of six Mahtomedi hits in the first three innings.

“I think once we realized that these guys weren’t going to hit the snot out of the ball [the whole game] … we were able to calm down and get things going,” said Decker, who made just his second pitching appearance of the season.

Decker backed up his first inning of relief with a leadoff single in the bottom of the fourth and scored when Caden Espinada Banick’s ground ball got past the Zephyrs shortstop. Ryan Munson, who followed Decker’s hit with his own single, stole second and scored the tying run on Zach Salchow’s single.

Decker sparked another rally with his leadoff single in the sixth. He went to third on Munson’s double and scored on a balk by DeVore, who entered the game with a 3-1 record and a 1.48 earned run average. Espinada Banick drove in Munson with a single and scored on an infield out off the bat of Erik Reimann to cap the three-run sixth and provide the game’s final run.

Decker’s performance masked the absence of junior Ben Malloy, one of Eastview’s best hitters (.391, 1 home run, 15 RBI) and pitchers who sat out Thursday’s game with a sprained ankle.

Mahtomedi (11-8, 10-6), ranked sixth in the Star Tribune’s Class 3A metro rankings from May 13, never was able to mount an offensive threat the rest of the way. Decker, who has plenty of pitching experience with his American Legion team during the summer months, struck out five batters and walked one.

Mahtomedi coach Rob Garry said his batters had a hard time making the adjustment from facing Greven to facing Decker. “He might have a touch more velocity, and he climbed the ladder more with his fastball,” Garry said.

The defending Class 3A state champion Zephyrs hit the ball often and hard against Greven and took a 2-0 lead into the fourth inning. But a baserunning error and a missed sign on a hit-and-run kept the Zephyrs from building an even larger lead.

Then Decker cooled the Zephyrs’ bats, heated up the Lightning’s bats and put Eastview, ranked seventh in Class 4A, in command.

“We’re a pretty formidable 3A opponent,” Garry said. “We have some good arms on this team and if we can make the plays we’re supposed to make, we’re a pretty good team."

Eastview enters the Class 4A, Section 3 playoffs seeking a return to the state tournament. And coach Tom Strey said he is happy to have discovered one more solid arm in his solid stable of pitchers going into postseason play. 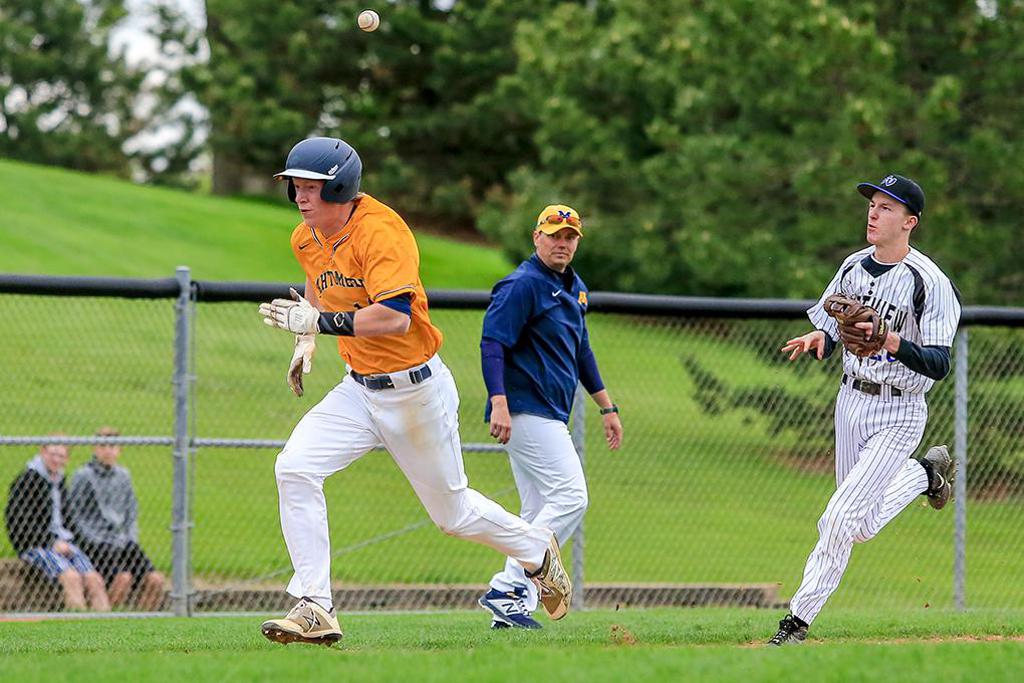 Kathan Decker pitched three innings of shutout relief and had two hits and two runs scored to lead Eastview to a 5-2 victory over Mahtomedi on Thursday.

Mahtomedi, the defending Class 3A state champion, pounded out six hits to take a 2-0 lead after three innings. Decker, who started in left field, relieved Lightning starter Austin Greven to start the fourth inning. He struck out the first two batters he faced and allowed the Zephyrs just three batters in an inning for the first time in the game.

Decker’s single leading off the bottom of the fourth was Eastview’s first hit off Zephyrs starter Johnny DeVore and sparked a game-tying rally.

Ryan Munson, batting behind Decker, singled and doubled and scored two runs for Eastview, a Class 4A state tournament team a year ago, now No. 7 in the Star Tribune metro rankings from May 13. The Lightning (15-5, 13-5) had already clinched its regular-season South Suburban Conference championship, finishing a game ahead of Burnsville and Farmington.

Decker, pitching for just the second time this season, retired the first seven batters he faced, striking out five, and faced just 10 batters over three innings.

DeVore, who entered the game with a 3-1 record and a 1.48 ERA, surrendered four runs on six hits and a balk. He struck out four and walked none.